It’s summer again and as per usual there’s been another spate of drownings, near drownings and even more rescues along Australia’s beaches and coastline.

Yesterday a 26-year old Afghan male drowned in a deep rip off Woolgoolga Beach on the Nnew South Wales mid-north coast. Of course he was outside the beach patrol flagged area.  It was not the rip’s fault. 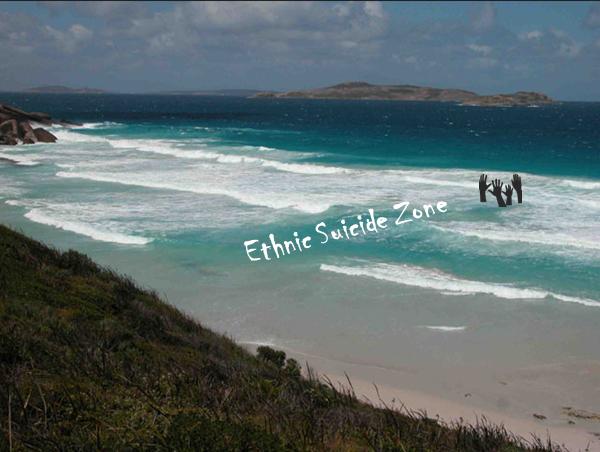 Out of the previous eight drowning events on the Coffs Coast, seven of them have been straight-off-the-plane foreigners – typically Third Worlders.  Dodgy low-cost strap-hang airlines are mostly to blame.  It’s the only reason backwards can afford to holiday in Australia, before they claim economic asylum for the good life.

Back on December 18, Mohammad Ghouseuddin (45) and Syed Rahath (35) [their real names] waded into the unpatrolled waters at Moonee Beach to assist their three teenage family members. Also with them was Mohammad Abdul Junaid (28).  All three males from Sydney’s spot-the-Aussie suburb of Auburn, succumbed.  Junaid’s body was found two days after he went missing 150km south of Moonee Beach, all rather chewed up by tiger sharks.

Some Swiss national in his sixties drowned at the same beach the following day.   By the time his corpse was recovered three days later it was not a good look. In February last year, media had reported that a 22-year-old “Queensland man” had been swept out to sea at Valla Beach south of Coffs Harbour   That was crap; he was ethnic, by the PC media deliberately hide the fact.  His compatriots tried to blame a ‘rogue rip‘, but it had been there for millennia.

In 2017 Ali Moswari (17) from ethnic western Sydney went missing after being caught in a rip. Sharks left no waste.   In 2016, two men believed to be Asian nationals were dragged out to sea in a rip at Park Beach. One 30-year-old succumbed in situ, while the other succumbed in hospital, which is how they identified the ethnicity.

Why Do Rescuers Bother? 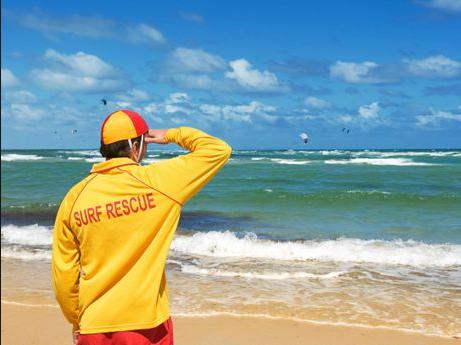 Aussie lifeguards around Coffs Harbour have had a gutful saying “What have we got to do?”   The lifeguards have publicly issued a desperate plea for people (ethnics) to stay out of waters where beaches were unpatrolled and to always swim between the flags and not to be heroes.

“We are begging people, especially new migrants and overseas visitors to swim between the red and yellow flags. If the flags aren’t up … DON’T GO IN.  If you are unable to see a rip current, DON’T GO IN … every beach in Australia that experiences waves will have rip currents.  “Never attempt a rescue without a flotation device.”   Kapeesh?

The post particularly takes aim at “new migrants and overseas visitors”, saying most of the victims of recent drownings on the Coffs Coast were people from overseas, new migrants or non native speakers of Engrish. 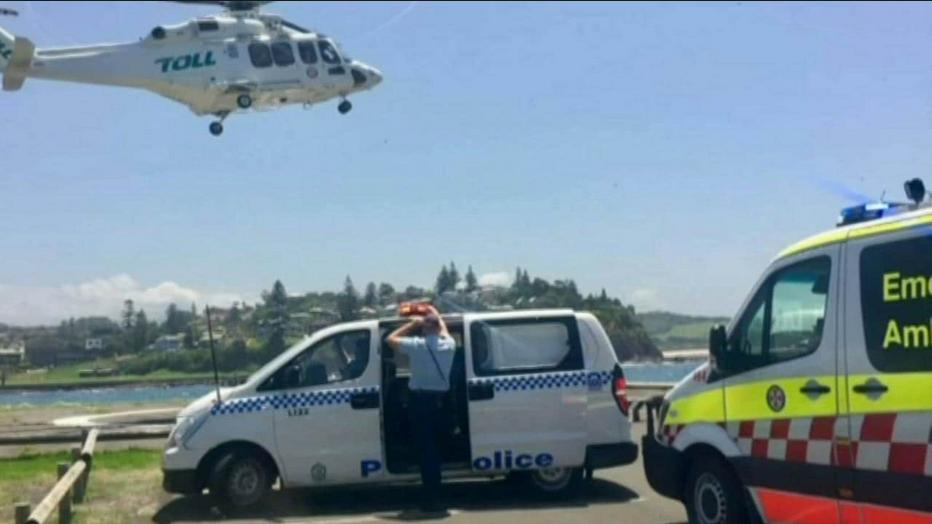 Surf Life Saving around Australia has become an ethnic joke.  It’s odd on that if there’s a rescue needed then it’s some dumb Third Worlder and outside the flags, and even better when it’s getting dark   They can’t swim to save themselves, then they wait for big surf.  Typically, they’re all male and think they’re walk-on-water heroes, yet they don’t even have a wader’s accreditation.  The official view is that foreigners “overestimate their capability”.  But at the rescue cold face, lifesavers and lifeguards know these lot just have NFI.

Calls for $50 Surf Rescue Levy on Each Foreign Arrival

All foreigners should be charge a mandatory Surf Rescue Levy before passing through Australian Customs.  Australia cops perhaps a million arrivals annually.  This is a mixed bag comprising:

So let’s arbitrarily guesstimate that a surf rescue with all the trimmings costs say $20,000 on average.  That’s allowing for all the infrastructure of the lifeguards, paramedics, marine rescue, choppers, police, all the equipment, facilities, technology plus the hospitals and morgues. 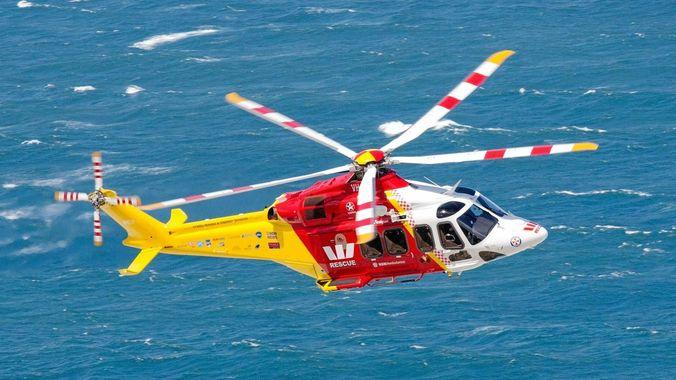 The calculated levy per foreign arrival into Australia then needs to be $50 each to fund the ethnic burden.  It needs to be paid upon arrival to Australian Customs at the gate; else it’s back on the plane to whence they came.  Upon payment of the $50, each ethnic arrival can then be offered a set of floaties for another $5. 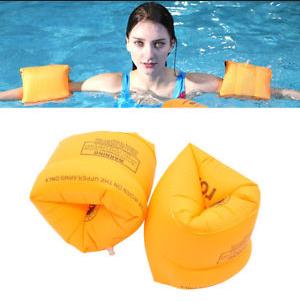 On February 3 last week another ethnic male (16) succumbed while jumping off rocks on the northern headland between Susan Gilmore Beach and Bar Beach at around 3:30pm.  It’s a favourite suicide by surf spot for ethnics.   Inflatable Rescue Boats from local clubs, the Newcastle City Council Lifeguards, Police, Paramedics and the Westpac Life Saver Helicopter operating out of Newcastle all raced to the scene to waste their afternoon.

Well then why did they bother?  Practice?

On the same day, a man was rescued by a member of the public at Sydney’s Collaroy Beach after becoming caught in a powerful rip, outside the flags of course.  It was not the rip’s fault; it hadn’t moved all day.  He was ethnic.  Also at Coogee a lifesaver doing training on a surf ski went to the aid of a struggling swimmer (ethnic), while at Tamarama a 21-year-old ethnic was transported to hospital for observation and given oxygen treatment after being plucked out of the water and treated by surf lifesavers.

Lethal tuberculosis (TB) is endemic across much of the Third World – throughout Africa, Asia, the Middle East, Pacific Islands even as close as Papua New Guinea. About one-quarter of the world’s population has latent TB – all Third Worlders. Yet on arrival into Australia, all incoming tourists have to do is tick a yes/no tickbox on the incoming passenger card. Medical checks only apply to those arriving on work visas or immigrating.

So within hours of a Third Worlder mixing it in squalid deepest darkest rat fest slums, they can be through customs and down one of our beaches coughing up Mycobacterium tuberculosis with gay abandon. 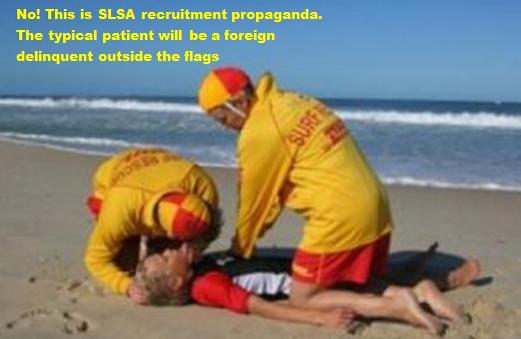 TB is spread from person to person through the air by coughing, sneezing, spitting or just speaking – propelling the TB germs into the air. A person needs to inhale only a few of these germs to become infected.  Infectious particles may be expelled during mouth-to-mouth ventilation. 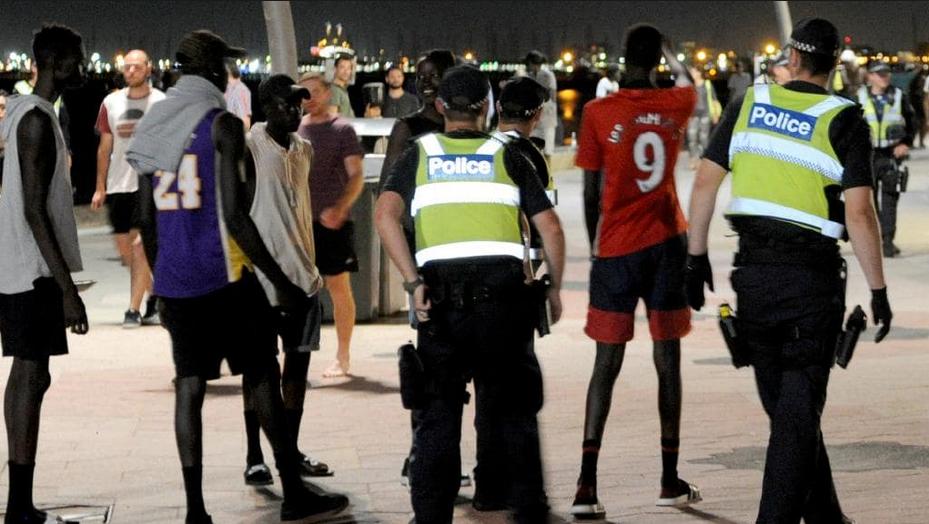 So think about giving CPR and mouth-to-mouth to one of these blighters who get stuck in a rip!.  Virtually any disease transmissible by secretions or blood may be acquired during basic CPR.  If the TB doesn’t get you, Neisseria meningitidis, Herpes simplex, Helicobacter pylori, Shigella sonnei and Salmonella infantis will. 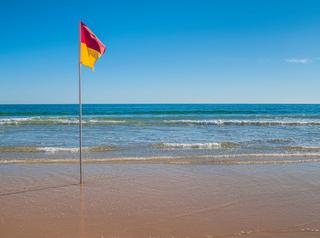 This is a beach patrol flag.  There will be two if you look hard enough.  The idea is to swim between them, not down the other end of the beach out of sight near the rocks in the rip and at night.

A recent study in America found that there is a 1 in 18 million chance of drowning at a Lifeguard/Lifesaver patrolled beach.

In Adelaide, Surf Life Saving SA has started running free swimming programmes for new migrants in response to the drowning deaths of two Burundian boys in Glenelg in January 2016.  Who’s paying for that?  Immigration? Last month they demanded funding from South Australian taxpayers to start up Surfers Rescue 24/7 to nanny idiots who want to surf through the night.

So much for cost recovery.   Why do Australians donate to Surf Life Saving and the Westpac Rescue when ethnics don’t?  It is the very ethnics who burden Australia’s surf rescue services around the national coastline.

On January 29, some Indian national (20) drowned while jumping off a cliff into unpatrolled Wattamolla Lagoon in the Royal National Park, south of Sydney. 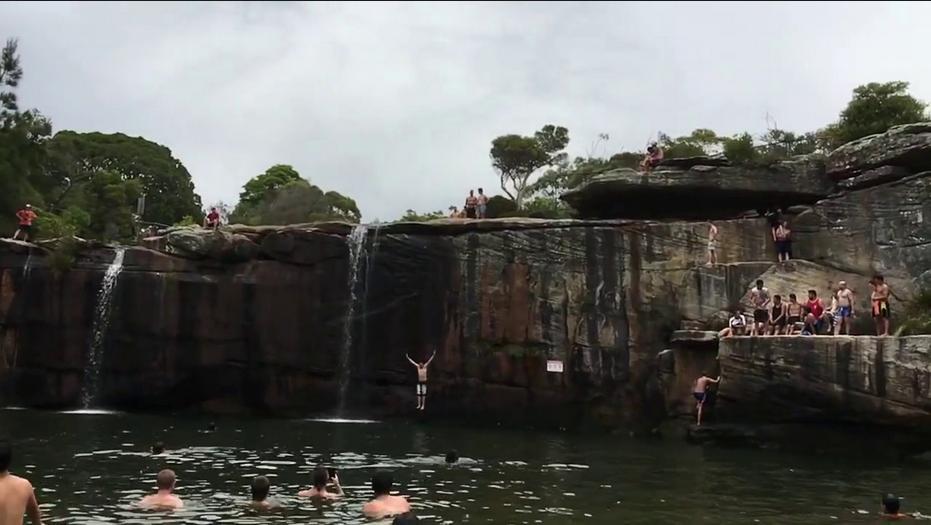 He and his compatriots had to walk past warning signs, the beach lagoon was unpatrolled and it was getting dark.   Yet the Westpac Life Saver Rescue Helicopter and NSW Police launched an air, sea and land search with the Police Dog Squad also joining in.  Due to low-light conditions, the helicopter was called off but police continued to search the area.  The NSW Police confirmed that police divers located the body at about 1:30 am a short distance from where he was last seen. 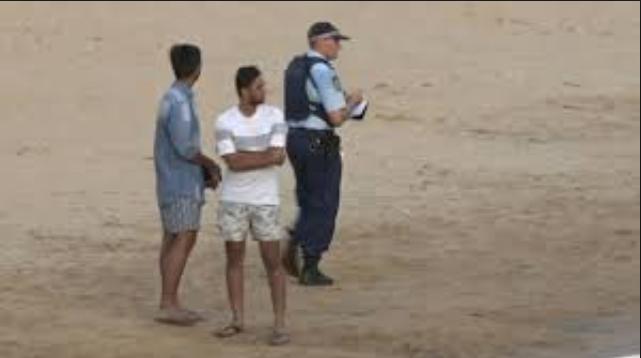 “…a report was prepared for the Coroner”.  But who paid?

Not the ethnic burden. They wouldn’t think of donating.

How much did that combined rescue effort at Wattamolla Lagoon cost?  Did the ethnic idiots get fined $20,000?  No.

“The Wattamolla area is an extremely dangerous place to swim, that lagoon has claimed countless lives already.  This is the second drowning death at the same spot since November last year when a 20-year-old man (drunk ethnic) drowned in the same waters and two others were hospitalised.”

Apparently, the latest ethnic demise at Wattamolla has sparked renewed water safety warnings.  As if that will make any difference to ignorant ethnics who ignore the warning signage.  They ignore public pleas from rescue services.  They avoid patrolled beaches like a death wish.

You don’t even need Engrish to understand these universal signs

Would education, information, signs make any difference, since this demographic can’t speak or read English?  The dumb bastards walk right past universal warning signs to get to the dangerous water anyhow.

Over half a dozen Indian migrants have drowned in Australian waters this summer, including a father-son duo from India who succumbed on Chritsmas Eve in 2018 at the unpatrolled Colonnades beach located over a kilometre from patrolled Woillamai Surf Beach in Victoria.  It was outside patrol times anyway at around 5:30pm. Another three Indian nationals succumbed near Coffs Harbour just days before that.

The multicultural success story New South Wales has had 24 coastal succumbings since July 2018.  In South Australia, two out of every five coastal fatalities occur more than 5km away from a Surf Life Saving Club.  It’s ethnic surf suicide.

The National Drownings Report shows one in four people drowning in Australian waters over the past decade were born outside of Australia with international students and recent arrivals and tourists accounting for a large number of drownings. 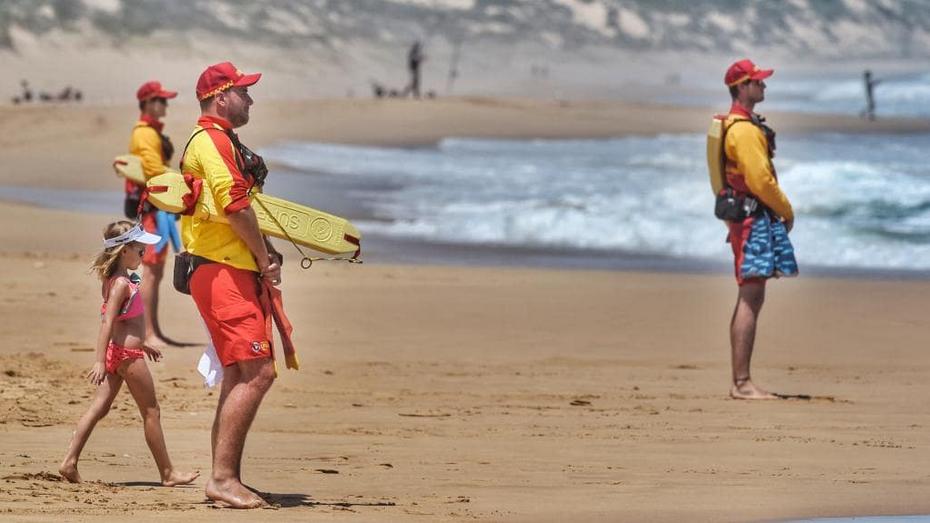 In NSW, in order to raise awareness and to equip migrants with the swimming skills, the State Government is providing a special swimming program.  Royal Life Saving has been funded to deliver adult ‘learn to swim’ programs for refugees and migrants across a number of communities mostly in Western Sydney.

Who’s paying for all that?  Not the ethnics, but White Australia taxpaying mugs.   Meanwhile, Ordinary Australians are going without around our once proud nation.

Surf Life Saving used to be Australia’s proud volunteering institution.  But these days, it is used and abused.  Only fools take up surf life saving because it serves largely the ethnic burden.   In the old days at least you knew you were there to support Aussies who could swim, who respected and adhered to the patrolled beaches.  But now foreigners take you for granted like an extension of their welfarist culture.

So local surf rescuers, be wise and throw in the towel because you are being used and abused by Canberra for risking your life for their imported invasion. 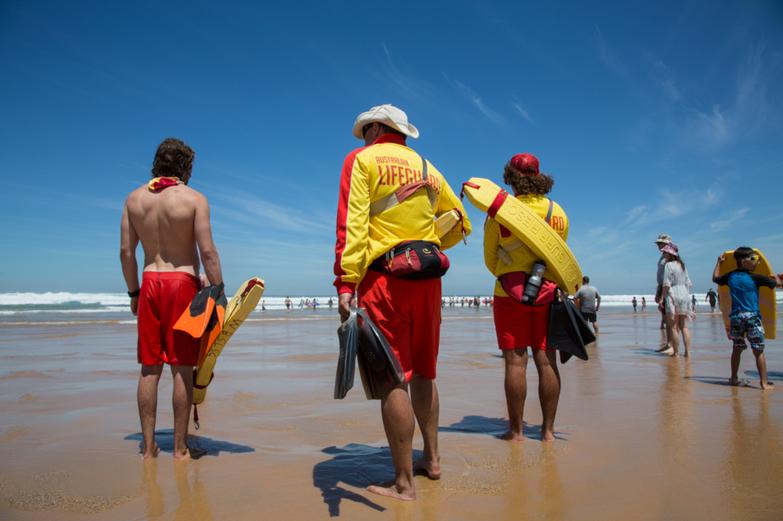 “Mate, if we surf life savers only rescue foreigners now, are we not just part of Canberra’s Immigration Department, so shouldn’t we be paid?”