This special Sydney Forum will examine the conservative movement from a number of different angles.

Is it really what Australia needs?   The Trump phenomenon: does it really have Australian counterparts, what of anti establishment dissatisfaction and who will lead the challenge and on what basis?

Dr. Tom Sunic, former Croatian diplomat, theorist of the European ‘New Right’, member of the American Freedom Party, via video link, will look at the ideological failure of conservative politics to initiate and maintain change in the era of Trump, the failings of Trump, and where America might be headed in unstable times: Tom spoke in Sydney on two other occasions in person for the old ‘Sydney Forum’ group.

“President Trump, American Conservatism And The Challenge To The Insider Government Of The United States.”

Perry Jewell, renowned political activist whose Confederate Action Party predated One Nation in Queensland, will look at the ideological-political construction flaws in the original One Nation, which is also a different entity to the new version. Guides to the present?

“Conservative Politics In Practise: The Foundation Of The Original One Nation.”

Dr. Jim Saleam, writer and activist for the Australia First Party, will view the present day struggle between conservatives and nationalists for territory and what are the issues at stake. Are these two strands of ideological thought in Australia in fact – divorced and at war? He will take a long historical view to arrive at present day conclusions.

Speaker to be confirmed will examine the wrong assumptions which underlie free market economics and the host of conservative think tanks which push it.

A lot is being said in the press about new ‘conservative’ parties and groups in Australia. There are a host of them, from Pauline Hanson’s Liberal Party Extra (oops PHON) to Australian Liberty Alliance, from Cory Bernardi’s conservative movement through to Q Society, and its time we got to the bottom of it all. Could this all be just a special Liberal Party guided push to re-centre (pardon the pun) Australian politics?

A special Forum will be held in April in Sydney (date to be set) with Australian and overseas speakers. We will get to it and try to assist new layers of people reaching towards Australian nationalism.

There has been an escalation of hype of late in conservative ranks with the election of President Trump and with certain European elections which feature parties that want to take the immigration debate into a discussion of Muslim migration only and the foreign policy agenda towards Aussie support for Israel. Whereas Australian nationalists see a multiplicity of immigration dangers and the encroachment of Chinese

imperialism, these folk don’t. While we seek ultimate neutrality towards Middle East problems, we can see, unlike these forces, that Israel is no innocent in the mix.. The conservatives’ two misleading lines of policy seem very important to them which should tell us something. Is there a scam being run?

Just for your entertainment today, we remind conservatives that their beloved Israel has been fomenting Islamist radicalism for a long time, albeit for its own purposes.

Israel’s romance with Al-Qaeda is ongoing

‘The Institute for National Security Studies in Tel Aviv is an influential think tank staffed by a rogue’s gallery of Israel’s former military and intelligence top brass; its director is a former spy chief. The institute held its tenth annual conference this week; speakers included current and former senior ministers in the Israeli government. Among them was Ayelet Shaked, who in 2014 approvingly posted to her Facebook page a genocidal article which specified in great detail that the “the entire Palestinian people is the enemy”; that Palestinian mothers should be sent “to hell”; and that Palestinian babies are “little snakes”.

In his conference speech, Education Minister Naftali Bennett, of the hard-right Jewish Home party, reiterated his past call for the annexation of Area C, some 60 per cent of the occupied West Bank.

The recently published annual report of the INSS has a fair bit to say on the war in Syria. One of the report’s authors lays out what he thinks Israeli strategy should be there. It’s not a pleasant read.

As I have detailed in this column before, although Israeli strategy in Syria since 2011 has shifted, with differing opinions prevailing at different times, the general game plan seems to have been the “let them bleed” doctrine. In other words, to encourage a state of civil and proxy war to continue for as long as possible. This allows Israel to contribute to the weakening of the Syrian state and its government, while at the same time denying its armed opponents an outright victory.

The INSS report advises a continuation of this same strategy, albeit couched in rather euphemistic terminology. “From Israel’s perspective,” it reads, “the best scenario is the disappearance of the Assad regime, along with the removal of Iran and Hezbollah from Syria on the one hand, and the defeat of the Islamic State and the establishment of a moderate Sunni regime in Syria on the other.”

This is in line with the report’s other headline finding: that the top two threats to Israel’s regional hegemony are the Boycott, Divestment and Sanctions (BDS) movement and Lebanese resistance group Hezbollah.

The Syrian regime has long supported Hezbollah’s armed resistance to Israeli occupation, allowing deliveries of Iranian arms to be shipped through its territory. It was mainly due to this that Hezbollah entered the Syrian war, fearing this key strategic support would be cut off by the armed opposition, which is dominated by sectarian extremists.

Hezbollah is a Shia group, a religious minority in the context of global Islam. Armed rebels in Syria frequently engage in chillingly sectarian attacks against the Shia, with notable Saudi-backed rebel leader Zahran Alloush once promising to cleanse Damascus of all “unclean Rafidites” (a sectarian slur against Shia).

In this context, the report’s reference to an Israeli hope for a “moderate Sunni regime” is the height of hypocrisy. Although it does not name the armed groups which Israel is supporting in Syria, it is clear that it is just such groups as those once led by the now-late Alloush that are being supported by the West and by Israel.

As the report clarifies: “this [Sunni regime] model has materialised in limited form in the Golan Heights, where moderate Sunni rebels are successfully combating both the Assad regime and the Islamic State.”

The reference here is clearly to the group formally known as Jabhat Al-Nusra, the Al-Qaeda affiliate in Syria. Nusra re-branded itself last year as Jabhat Fateh Al-Sham, a purely cosmetic attempt to distance itself from the notorious extremist group. As I have detailed in this column previously, the “moderate Sunni rebels” Israel is aiding in the occupied Golan Heights include this Al-Qaeda linked group.

Elsewhere in the report, it expresses the hope that Jabhat Fateh Al-Sham “will provide a wider basis for coordination” between armed rebel groups. “The question is what role organisations with a Salafi jihadist orientation can fill in a future arrangement,” it muses.

It has been a long-term strategic goal for Israel to divide Syria up into mutually antagonistic sectarian mini-states. As such, the war in Syria, with the prospect (however remote) of the breakup of the country has been a dream come true for Israeli planners. As such, there is no doubt that Israel’s cynical romance with Al-Qaeda in Syria is ongoing.’ 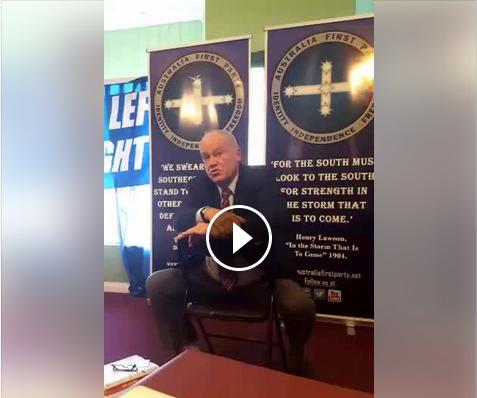 We expect to have this video available on our YouTube channel shortly.