Australia First Party welcomes support and input from our members, our financiers, and from our support base – in which ever ways people are able and willing.

Screening and background checks are par for the course 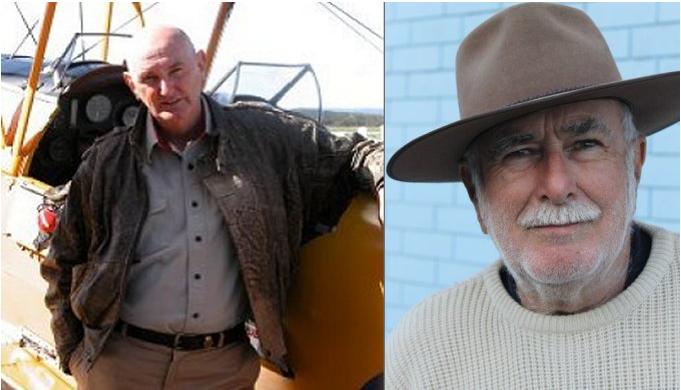 Here are some suggested ways we would appreciate your contribution – as your time and ability permit.

Members of choose their own involvement.  Whatever the involvement, it honourably should be undertaken with integrity and reliability.

Action can also be arranged in a small group.

All members have access to political booklets from the Information Service.

Stickers and Leaflets – Don’t leave home without them – a few in the pocket can do the job!

Postering – use Selleys Aquadhere glue – mixed 20% glue to 80% water and when pasted up, run roller over face of poster. Generally avoid private property although multinationals, banks, politicians, and others of the Traitor Class are fair game. Get a few mates and work at night, using a bucket in a shopping bag with a roller or brush [roller preferred] and on foot away from vehicle, which should be parked away from immediate area. Use a beanie or face covering if required when spook cameras are thought to be about. 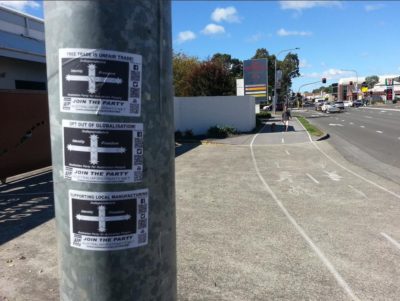 The following statement was approved by the then ‘Management Committee’ of the Party on January 10 2011. It is a key Party document.

‘The Australia First Party recognises the dependent nature of the Australian state upon the forces of globalism. Australia is a client state, ruled by a traitor class which is integrated into a transnational network of globalist elites and their economic and political structures. This class would govern Australia as a resources quarry cowed by thought-policing and a secret political police. Australia is further menaced by a new Chinese imperialism that competes with the American face of the New World Order for domination over Asia and the Pacific, with Australia a pawn in the game. The unfolding population / food crisis coupled with New World Order wars launches refugee hordes at Australia’s borders, whilst the traitor class sponsors a mass immigration recolonization of Australia for the purposes of economic enmeshment with the ‘global economy’. In the world crisis of the first quarter of the twenty-first century, Australia lacks status as an independent country. Indeed, Australia may disappear by century’s end as a country – and suffer partition by other states.

To rescue our country and our people means removing Australia to a position outside of the chaos of globalism. That means the creation of an independent Australia. To win an independent Australia where political power can be exercised directly by the people, where wealth comes to all who labour and where arms and the initiation and the enforcement of the laws are in the hands of the people, a new force outside of the old parties and their worn-out ideologies and prejudices – has become necessary. This new nationalist movement must now fight and win the struggle for Australia’s national independence.

It is ultimately necessary to unite all who can be united against the traitor class into a broad patriotic front to achieve Australian national independence. All those parties, groups and trade and community associations which contest the ideology, the politics, the economics and the cultural expressions of globalism, can find common ground against the foreign control and exploitation of Australia. Their uniting thread is the cause of Australian national independence.

The patriotic united front should not be a matter for tomorrow, but a matter of immediacy. United fronts operate in two ways: we predict the ultimate formation of a mass united front in times future, one that will win Australian national independence at a moment when parties and groups, economic and social and cultural associations all bond together in intense struggle. For today, we must build for that future in struggles on a daily basis around all manner of issues; we must wage community campaigns apposite to each Australian group and build unity on the ground. It is mandatory to seek this unity.

The Australia First Party is an incorporation registered as a Federal party. That does not mean that its function is only to contest elections. The party operates to ‘The Three Tier Method’.

This means that the party contests elections, wages community campaigns of all sorts to build links with fellow Australians and to unite all Australians – and develops its ideas and principles into an Australianist ideology that also carries on a cultural defence of Australianity against globalisation. The three tiers operate as a unity.

In one sense, the party reaches out to groups of a patriotic nature which may operate to one or another of the three tiers as their individual method. The party seeks to build relationships with such parties and groups and to unite whenever necessary to defend common interests and win common victories. New patriotic groups form either as political, trade, or cultural groups. As Australia descends into chaos, that process is organic.

Australia First Party within the broad Australian patriotic movement seeks to be a vanguard movement. This means that the party struggles to affirm the power of the ideals of Australian identity, independence and freedom, to carry those ideals everywhere, to defend them and preach them with zeal as a veritable Australianism and to inspire all others to tread the path towards the overweening fight for Australian national independence.

The party states clearly how it would prefer its dealings with other patriotic political organisations to be conducted and what relationships should be developed.

The Australia First Party recognises that different parties and groups exist for several reasons. These reasons can include: geographic circumstance, particular historical factors, previous organisational histories, the inter-relationships of people and sometimes – internecine struggles that are to be regretted, but which are human nature.

The Australia First Party declares that it will treat the other political organisations within a patriotic united front in this way:

The party states clearly how it would prefer its dealings with other patriotic community organisations to be conducted and what relationships should be developed.

The Australia First Party recognises that different community associations arise for different reasons. Some defend the interests of the Australian productive classes – workers, farmers, small-business or other patriotic working people. Some advance the defence of Australian heritage and identity. Some explain new ideas that can inspire a very different Australia.

The Australia First Party declares that it will treat other organisations that represent the Australian community within a patriotic united front in this way:

The Australia First Party will always maintain its independence and initiative in any united front arrangement and will act to secure its interests. However, it accepts that the times require a flexible and co-operative attitude.

Certainly, the goals of the Australia First Party are (i) to unite all nationalist and activist minded people into a single party and then to seek further working arrangements with whatever political forces may thereafter exist for whatever reasons outside of the party’s ambit and (ii) to deepen the unity of Australia’s productive classes and their organisations against the traitor class and to create wider unity amongst all those resistance organisations which critique globalisation in ideas and culture.

Certainly, the party’s aim is indeed to impose order where we detect diffuseness and to give focus where we note disarray.

Nonetheless, the party reasons that such general goals can not be reached by a self-proclamation of virtue. Rather, the party will fight such that its ideological position and political line progressively gain hegemony. It shall do so openly and honestly and by all fair means of discourse. No other organisation should feel anything else than a sense of relief that the position is made clear.

In the interim, and given that the fair contest of parties and other forces will continue, the Australia First Party has concluded that the only practical way whereby all may learn of each other and build the necessary bonds and links which allow for final unity, is to work confederally to construct a practical unity in struggle.

The united patriotic front is the requirement to which all should work.’