The Liberal State government and its local Council puppets are on a collision course with a growing people’s heritage struggle around the preservation of the historical Old Windsor Bridge (1874) and the Thompson Square precinct. 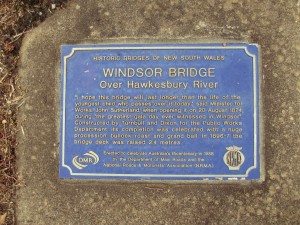 A popular rally pilloried the State government’s plans on Sunday June 3. Some 200 people braved the rain to make their feelings felt.

The bloody-mindedness of the Premier (in particular) to enforce the diktat – is noted. The government simply refuses to consider other reasonable bridge-building alternatives. It does not beggar much brain-searching to conclude that it is all an exercise in ‘culture-busting‘ – breaking the resolve of the community and their bonds of the local identity.

This is all prepatory to the big developments and population surge scheduled for the Hawkesbury.

The Liberal Party held 51% of the primary vote in Hawkesbury in a 2010 by-election. It is fairly certain that the Liberal vote will lose ten points (at least), come September. Hence the secret (sic) Lib-chatter about a bogus independent ticket to siphon votes back to mother.

The main factor in defence of the Hawkesbury’s heritage remains people’s action. Tony Pettitt’s Australia First activists will participate in this fight as individuals and in full co-operation with the campaign group.

If elected to Council in September, Tony Pettitt and the Australia First Party will continue to fight to preserve Hawkesbury’s heritage.