The release of the Commonwealth government Cabinet papers for 1988 – 1989 provided us with some vindication of the Australian nationalist struggle in times past.

For me personally came information relevant to overturning false convictions procured against me by our political police agencies, the Australian Security Intelligence Organisation (ASIO) and the (former) New South Wales Police ‘Special Branch’. This useful background data was contained in an ASIO ‘Memorandum’, dated November 27 1989 and passed to Prime Minister Bob Hawke’s Cabinet.

Australian Nationalists say – and I have argued publicly ever since – that in 1991 I was falsely imprisoned for alleged participation in a January 1989 shotgun attack upon the home of Eddie Funde, Representative to Australia of the African National Congress (ANC). Funde, now shown to be wildly corrupt in South Africa, was for many years prior to the attack the darling of the Australian liberal media elite. More tellingly, the Hawke government had covertly and indirectly financed and facilitated his activities in Australia from the time he arrived here in 1984, even employing conduits and surrogates in its financial and organizational arrangements.

Prime Minister Hawke had a direct interest in the attack upon Eddie Funde which I say was carried out upon his home by two young men out on a perverse prank. I have received intelligence to the effect that in September 1989 the Foreign Minister Gareth Evans effectively ‘promised’ the ANC I would be prosecuted over the Funde attack. Undoubtedly this is correct, given that Hawke personally was up to his neck in ANC activism in Australia. In 1985, I saw a letter confirming that he had intervened personally to establish an ANC office in Sydney for Eddie Funde. 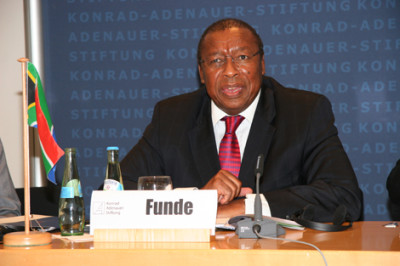 It says to nationalists that the Funde shotgun matter could never have been left as two foolish men playing a violent prank; the state required a political trial to show the perfidy of ‘racists’ and the ‘heroism’ of the ANC Representative. So the affair was upgraded by the men reluctantly (as even the state’s evidence showed) making statements claiming that I and another man had instigated the attack upon Funde and given them the firearm. For the record here, there has never been any other evidence – scientific, civilian-witness or confessional – that showed I was involved in the crime. The version given by these men was vehemently denied by me and other witnesses, but as often happens in political trials, juries are loath to acquit the accused. The Cabinet was duly informed in the Memorandum that the two Funde assailants had made these statements, something which must have brought great mirth and joy at morning tea.

In the period 1988 – 1991, I was the chairman of the nationalist party, Australian National Action. The ASIO Memorandum suggests that we were engaged in some violence as a response both to a broad immigration and multiculturalism debate and to public “concerns” about Japanese investment in Australia. I might just as easily say that the ASIO had targeted us because we rejected the Asianising immigration policy of the Hawke government and its keen desire to enmesh Australia’s economy with Asia. Interestingly, ASIO said it “is not clear” why violence had escalated other than for reasons expressed in those terms. It might equally be – as we always said – that other than a few confrontational incidents, Australian National Action was not involved in violent activities. However, ASIO said that we intended “to increase racial tension” in Australia – which clearly would draw their reaction.

The Memorandum by its very nature implied ASIO was seeking formal government sanction for an energetic reaction to Australian National Action. Of course, Prime Minister Hawke would hardly have denied them that. He had previously criticised Australian National Action on Perth radio (October 1988) for our campaigns against foreign investment and again in Federal Parliament in March 1989 for our “racism”.

Yet, ASIO complained that it had neither the funds nor the human resources to allocate away from its other tasks to deal with so-called racists. It said there many other difficulties and dangers in dealing with us. ASIO said that it was working with “the appropriate” State police. Was that to save the costs and effectively to employ other already-active resources? In my case, that meant working with the notorious New South Wales Police ‘Special Branch’ – an organisation found institutionally corrupt in the Police Royal Commission in 1997. But of course – that finding was then years away. It also meant working closely with my ‘case manager’, the then Detective Sergeant (later Superintendent and last Commanded of Special Branch) Neville Ireland. He was found personally corrupt in 1997 and his much of his corruption was centred right in the period that he was investigating (sic) me. Did ASIO know that? Would ASIO have cared?

ASIO advised the Cabinet that suppressing us would not be an easy task. The Memorandum referred to “the strong leadership … of Saleam” and that “Saleam has maintained control of NA from gaol” – where I had served a short sentence on an unrelated matter before being ‘remanded’ in custody over the Funde charges.

Ominously and prophetically (sic) ASIO said: “Saleam’s current one-year sentence would be increased if he is convicted on charges resulting from the Funde shooting.”

Of course, ASIO found its own way to incite the fears of Cabinet members and to thereby earn that sanction. ASIO opted to paraphrase me and then misinterpret what was said. In a long statement, I became a dangerous revolutionary and possible terrorist and one about to strike. ASIO said:

“NA aims to establish an Australian republic with a new constitution and
a national government with representation from all political parties. However,
NA’s leader, James Saleam, dismisses the possibility of achieving power by
parliamentary means. Rather, he writes of Australians needing to become
‘accustomed to political turmoil, disorder and even social violence’ and of the need for NA to ‘destroy public confidence in the state-power’ and to contribute to ‘the coming gross instability of Australian politics.’ The main theme of NA’s ‘Political Programme’ proposes that a ‘White Australia’ be established, by restricting immigration to persons of European racial descent, by deporting illegal immigrants and repatriating those who can not or will not assimilate into the Australian culture.

‘Asianisation’ is described in Saleam’s pamphlets as the ‘major enemy of the Australian People and Nation’, and ‘a matter which is certain to be decided by guns – through national war and possibly, civil war.’

Needless to say, ASIO had waded through a mass of pamphleteering and speechmaking to cobble together enough historical and critical material to infer that I advocated people take up guerrilla war – and do it now. I have little doubt that the nods and winks of Cabinet towards ASIO at this tale of imminent woe set me upon the road towards a political trial.

To my mind, ASIO was ‘intending’ to facilitate my conviction. Of course, ASIO would insist it has done nothing wrong in assisting Special Branch and may throw off any impropriety I might prove – towards that discredited agency. Needless to say, I would never ‘buy’ that. I blame ASIO squarely for perverting the course of justice.

Ultimately, in October 1990, ASIO was compelled to take over the Funde case from Special Branch which had rather botched matters and streamline the case through to a victory in May 1991. As they wrote in a Report To Parliament in 1991, they had concluded operations “conducted jointly with police”, an operation that led to my imprisonment.

What should be obvious to all now, thanks to the Memorandum, is that the Funde prosecution was a security case, a political trial, exactly as I have always said. It was important enough to be discussed in Cabinet. It was important enough to be coloured by a brief that said I was an immediate security threat My trial joins three others – the Ananda Marga case, the Croatian Six case and the Hilton Bomb case – as a trail involving the security agencies ASIO and Special Branch, claims of false witness testimony and police perjury, suppressed evidence and other illegalities reaching high up inside state agencies.

The release of these Cabinet papers is just another part of a long political struggle in which many nationalists have been engaged. We rejected then as we reject now, the official logic of the sustained political police attack upon the nationalist organisation of the day – Australian National Action. We know that in the current political climate, the political police agencies still work to marginalize nationalists and other patriots. In 2011, ASIO admitted in yet another Report To Parliament, that “nationalists” were a main target of its activities, formalising again, a position it had adopted in 1989 and reaffirmed in the 1990’s.

It had been the lot of many activists from that earlier period from 1988 – 1991 – and who along with me now work in Australia First Party –   to have upheld the Australian nationalist cause, to have protected many nationalist comrades from false prosecution, to have ensured the survival of its networks and resources. We did what we could in difficult circumstances. Ultimately, I went to gaol. Yet, neither I nor my closest comrades could be forced to ‘break’. We are unbroken still and we had the satisfaction of watching the last Special Branch Commander Ireland fall “a broken man” as one journalist told us in confidence at the Police Royal Commission – cortesy of information we had provided to investigators. We had the satisfaction of opening many Special Branch files which provided useful information that may yet overturn my convictions.

Later in 2015, I will file in the New South Wales Supreme Court the Crimes (Appeal And Review) Act application for an inquiry into the Funde convictions. I do not expect that the judge hearing the matter will order the inquiry and if by some miracle one was ordered – I do not expect to win it. Like the other political cases involving ASIO and the Special Branch, the state has too much political capital invested in falsehood to let the convictions go. The Croatian Six were denied an inquiry by the very Supreme Court Justice who had been the Crown advocate in my unsuccessful appeal on the Funde convictions and the Hilton Bomb case is never meant to be solved, lest ASIO find itself in the dock.

So my fight for an inquiry too will be just another long march through the institutions of the state, another piece of theatre in an ongoing propaganda war.

The passage of time, as the release of the Cabinet papers shows – is that a little more of the truth comes out.

1. The ASIO memorandum referred to two organisations – Australian National Action and the ‘Australian Nationalists Movement’ in Perth. I note we were called “racist” but the other was described as “neo-nazi”. It seemed ASIO had its own imperfect labelling system. I note that many lying journalists who have reported my court case and myself on many occasions have declined to make the ideological distinction between nationalists and neo-nazis. Small mercies are derived of whence they come.

2. The state’s two witnesses against me have had chequered lives since 1991. One has done time for being a drug user and dealer and has made a statement saying I was not involved in the Funde crime, while the other has lived on witness protection in New Zealand and possibly infiltrated youth gangs for Kiwi police intelligence. Neville Ireland stole large sums from Special Branch’s informant’s fund and lied to Royal Commission investigators about it; he was allowed to retire from the Police Force. Eddie Funde may never be prosecuted for receiving fraudulent commissions in hyper corrupt and ‘rainbow’ South Africa.