Australia’s hard-fought freedoms since Eureka Stockade of 1854 must not be taken for granted.  Our freedom of speech is an essential tenet of Australia’s democratic liberal society.

The Australian Constitution does not explicitly protect freedom of expression.  This was an oversight by our Federation Forefathers in 1901.  However, the High Court has held that an implied freedom of political communication exists as an indispensable part of the system of representative and responsible government created by the Constitution. 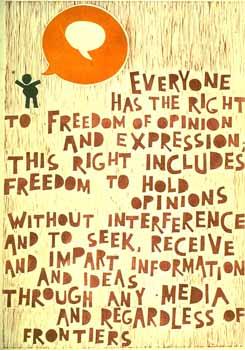 A small number of human rights are recognised as absolute rights which cannot be limited for whatever reason:

Sadly and disturbingly, a number of individuals in Australia in recent times have been denied their democratic freedom of free speech. Offensive behaviour because of race, colour or national or ethnic origin

(1) It is unlawful for a person to do an act, otherwise than in private, if:

(a) the act is reasonably likely, in all the circumstances, to offend, insult, humiliate or intimidate another person or a group of people; and

(b) the act is done because of the race, colour or national or ethnic origin of the other person or of some or all of the people in the group.

Note: Subsection (1) makes certain acts unlawful. Section 46P of the Australian Human Rights Commission Act 1986 allows people to make complaints to the Australian Human Rights Commission about unlawful acts. However, an unlawful act is not necessarily a criminal offence. Section 26 says that this Act does not make it an offence to do an act that is unlawful because of this Part, unless Part IV expressly says that the act is an offence.

(2) For the purposes of subsection (1), an act is taken not to be done in private if it:

(a) causes words, sounds, images or writing to be communicated to the public; or

(c) is done in the sight or hearing of people who are in a public place.

“public place ” includes any place to which the public have access as of right or by invitation, whether express or implied and whether or not a charge is made for admission to the place.

Click to link to our articles on this vital campaign:

Evelyn Beatrice Hall (1868-1956) wrote under the pseudonym ‘S. G. Tallentyre‘, was an English writer best known for her biography of Voltaire entitled The Life of Voltaire, first published in 1903.

Hall’s quotation is often cited to describe the principle of freedom of speech. François-Marie Arouet (1694-1778) known by his nom de plume ‘Voltaire‘, was a French Enlightenment writer, historian and philosopher famous for his wit, his criticism of Christianity, especially the Roman Catholic Church, and his advocacy of freedom of religion, freedom of speech, and separation of church and state.  Voltaire died four months into Australia being founded at Sydney Cove.