In the last Federal election, the Australian Labor Party (ALP) candidate, David Bradbury, won the seat of Lindsay (which takes in most of Penrith City) by a wafer thin margin.

We are informed that the ALP has done (secret) polling in Penrith City that indicates their vote has collapsed.

If it reaches the national score of 30%, it might be a welcome surprise. Of course, traditionally, the ALP always polled well in the eastern area of Penrith centred on St. Marys.

The collapse of the ALP vote may have several causes, but for Australia First it has come at an important moment.  Will this factor spur the Girotto campaign?

Herald-Sun (Mar 31, 2011):
You can see the wreckage of Labor’s heartland still nailed to telegraph poles on Luxford Rd in Londonderry, 45km west of Sydney’s CBD.

The campaign poster for Allan Shearan smiles blandly down on an electorate that was once rock-solid ALP, the hard-scrabble areas of North St Marys, Tregear and Whalan.

On Saturday they kicked the guts out of Labor. Now a sea of conservative blue covers the western suburbs of Sydney, after Barry O’Farrell’s Liberals made inroads into places John Howard never reached; Labor strongholds once thought impregnable.

These were Labor people, the working poor and their welfare-dependent neighbours in the most marginalised part of the city, turning their back on the party which they feel has betrayed them.

No matter how hard Julia Gillard and her federal colleagues try to spin the outcome of the NSW election, the message has been delivered: the reaper is coming for them too. Londonderry, Mulgoa, Penrith, Smithfield, Parramatta all flipped to the Liberals with savage swings against Labor of more than 20 per cent — about the size of Mt Druitt’s unemployment rate.

Just a small patch of red remains in the centre, the seats of Mt Druitt, Blacktown and Toongabbie, which Labor barely retained with swings against it of 19.4, 18.8 and 13.7 per cent, respectively.

“There will be more crime,” she says. “People don’t look after their children now and they’ll be even worse.”

Why? “Because the Liberals will come in and stop the payments. There will be more crime because people won’t have any money.”

Established 50 years ago for public housing, the area is home to three generations of disadvantage.

You can see the classic markers of underprivilege: graffiti, unkempt public housing and young obese women sluggishly pushing prams home from McDonald’s. This is the world of the infamous school bullying incident on YouTube, in which Casey Heynes struck back against Ritchard Gale, a world where teeth are in short supply and tattoos and rat’s-tail hairstyles abound.

But more often than not, in these flat, featureless suburbs that make up Sydney’s forgotten core, you see modest houses, with well-tended gardens and pot plants, small mowed front lawns and cyclone fences. There are palm trees and Australian flags, and a sprinkling of satellite dishes. This is Holden country, where working people have been trying hard to better themselves, take pride in their homes but increasingly struggle to pay their bills.

“They are decent people around here. They look after their properties. But the electricity bills are killing a lot of people.”

He sold a little manual car this week to a woman with three children, who was trading in her Falcon because she couldn’t afford $75 a week for petrol.

“She had to sacrifice something to keep paying the debts.”

From a staunch Labor family in Yorkshire, England, Richard says he no longer votes Labor because “they no longer respect working-class people”.

This is the heartland Labor took for granted and O’Farrell snatched away. He means to keep it too, with one of his first decisions as Premier to appoint himself minister for western Sydney.

People here speak of being ignored by Labor, which they say has taken them for granted and “lost its roots”. They are angry and worried about escalating prices of electricity, petrol and water, which they regard as basic necessities they cannot cut back on any further.

“The point of the business is to make money,” says Telford owner Lucia Townson, 49. “We’re just paying the bills and wages.

“It’s terrible. The Labor Government has done this. You used to be able to live. Now you can’t even exist. The old people live in darkness. With winter they will be living in blankets. We’re going back to the Stone Age.”

She works seven days a week, and lives by herself. “I just go home to sleep and shower.”

Yet her electricity bill was $530 last quarter.

ENERGY prices have just been the final straw in an already weakened local economy, seemingly doubling in a few short years, a rate that is a lot higher than the 32 per cent quoted by government. And on top of it comes the carbon tax, estimated to force up prices another 40 per cent.

For Townson, its main significance was Julia Gillard’s breach of faith. “She lied about the carbon tax.”

Builder Stan, 66, who works seven days a week, and also sells cars for Townson, says: “My biggest concern is the utilities. The water and electricity bills (as well as) speed cameras and fines.

“From the time you get up and go to work you’ve got to be on your guard. From Penrith to Parramatta there are six or seven speed zone changes and speed cameras. When you get to work, (with a speeding fine) that’s a day’s pay gone. It doesn’t stop there. You park (outside a building site) to drop your tools off and you get a parking fine.

“You come home and open your letterbox and all the bills are there. I dread opening my letterbox now.”

In Queen St, the once thriving main drag of St Marys, shops are shuttered, and empty houses dot nearby streets.

Murray Short, the manager of Online Hire, an earth mover and building equipment outfit, says his removalist truck is out almost every day as families give up, pack up and move interstate or go to live with family in country towns such as Young, Bathurst or Orange.

“A lot of people are in dire straits,” he says.

These are the working poor who are flocking to financial counsellors, seeking help to get out from under the debt that is drowning them and who have now resorted to charity food parcels.

With very basic three-bedroom houses, former public housing, costing at least $320,000 in these disadvantaged suburbs, and rent at $320 a week and rising, they are stretched as tight as they can go.

While Julia Gillard and the two country independents swear blind there is no lesson in the NSW results for them, the message from the once stalwart Labor heartland tells a different story.

Tony Abbott would be prime minister now if a few more booths had swung his way in these suburbs. Now he has O’Farrell’s army of keen new Liberal members to smooth his path, and suburb after suburb which has stopped trusting Labor. 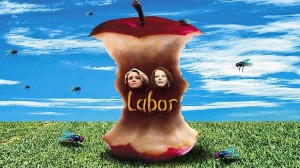