The LibLab controlled Council knows all about community consultation. It means ‘inform’ doesn’t it? You can ‘Have Your Say”.  You can “Bang the Table” all you like.

Liberal Mayor Daniel Myles says.. sure there was community consultation about the sale of the old Blackheath Airstrip land on Hat Hill Road.  Back in 1991, remember?  Then at Council’s meeting on March 13 this year, well community consultation was proposed, but actually got overlooked.  Big Boy Myles then ‘consulted’ with 350 residents at a packed hall in Blackheath last May, or was that ‘informed’?

“There is no intention to hold any further public meetings on this matter,” a Council staffer said.  You can bang the table all you like.  If Council wants to privatise community land and sell it off, try stopping us!

Anyway, “we have community facilities across the Mountains that need upgrading,” according to Big Boy Myles.  What he means is he wants his own cultural centre, just like predecessor Labor Big Mayor Angel has got his.  Katoomba’s cultural centre features a bigger Coles Supermarket, a theatrette, a multi-purpose workshop, Coles carparking, a café, a souvenir shop, two courtyards, and a Coles delivery ramp.

Ratepayers are set to subsidise the first four years of operation by just over $1 million each year until 2015.  Big Boy Myles says this is ok, because they are “community facilities”.

Katoomba’s cultural centre – a Coles flavoured one
As expected, the reality was quite short of the artist’s impression

The revenue from the sale of the 45 subdivided lots on Blackheath’s old airstrip will be used to fund Big Boy’s Springwood Cultural Centre.  But with a soft property market and millions of ratepayers money to be spent connecting utility services to the 45 lots, the revenue from land sales could be decades away.

Costs estimates so far for the Springwood Taj Mahal are $9.5 million.  Council will have to flog off the childhood centre to raise the money, except it doesn’t own that either.  So there will need to be more deals along the way.  Let’s call that Stage 2.

But Springwood’s Cultural Centre will have a bigger 500 seat theatre with catering facilities, so one up on Katoomba! 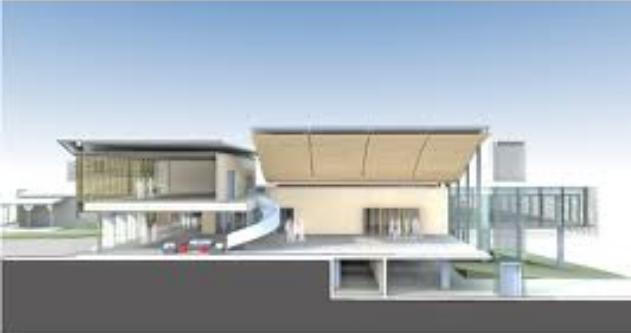 Springwood’s turn for a Mee Too ‘cultural’ centre too – Woolies flavour!