On December 8 Penrith patriotic people demonstrated against the second Penrith Mosque proposal. The Council voted to build it.

We have published several articles on this subject in the last week and they appear on our national Facebook page (check it out below).

Now we have witnessed , an Islamic extremist group in Sydney seize a café and threaten the public.

These Mosques will culture-bust Penrith and there must be resistance. But the Liberal Party ‘conservatives’ are hard at it trying to suck people in to following them as they act ‘tough’, ‘rebel’ against the Liberal party machine and promise to really ‘represent’ us.

Pigs fly as they say.

A new strategy and new tactics for patriotic people are needed and we will do our best to provide it.

The Penrith patriotic people had a ‘defeat’ of sorts on Monday night when the Penrith City Council affirmed that it would go ahead with the second Mosque at Kemps Creek. The first was approved on November 8. One is Sunni and the other Shi’ite.

The extreme-left rabble from Antifa and the Trotskyite groups who demonstrated at Penrith Council chambers on Monday, proclaimed the building of the Mosques would be some sort of victory against ‘Islamophobia’ and for tolerance and religious freedom. Ironic – since these groups regard Islam as patriarchy, sexism and superstition and even ‘anti homosexual’.

But that was just one anomaly Australia First Party members noticed when they joined the people’s protest. Of course, the anti Mosque protest drew the positive local people and their supporters from various political groups. Unfortunately, it also drew a collection of odd individuals and members of shadowy circles who attached themselves to the protest. These were various dross from the dirty tricks department of the Liberals, false-Christian nuts with Zionist flags (see the article below and its sick pic) and assorted other fraudsters. This seemed to us indicative of the central direction of the anti Mosques ‘action group’ directed by Liberal Party Councillor Marcus Cornish. 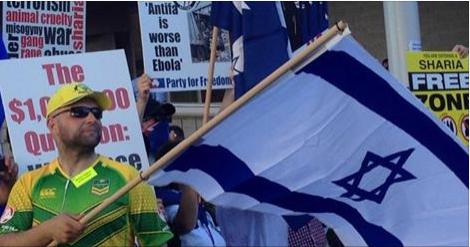 Councillor Cornish has been the front-runner in organizing against the Mosques and he has been widely reported in the media. He is a member of the Liberal Party and is a member of the party’s so-called conservative faction. Certain odd bods who turned out in the crowd and who we identified are people who lend themselves on occasion to the Liberal Party ‘conservatives’ and who can bolster the illusion that these Liberals really are ‘different’.

It is now understood that Councillor Cornish wishes to take the latest Mosque case off to the Land And Environment Court. He may succeed there, or he may not. He does not seem to want to take the first Mosque matter to the Court. Why not? However, the Council’s decision and the possible court action essentially means an effective end to the demonstrations. However, it is by far not the end of people’s action and the patriotic people in this struggle for Penrith’s heritage must now decide whether they act closely with Councillor Cornish – or take their own road.

There is one obvious fact that warns us about Liberal games and should encourage us to urge the Penrith patriotic people to take the path of struggle. We see that it is fairly clear Councillor Cornish has an interest in repackaging and marketing his Liberal group as people who can be trusted by the locals and who will stand up for the popular will. It has been whispered that these Liberals are in ‘revolt’ against their ‘liberal’, ‘soft’, ‘tolerant’ Liberal Party and that they reject multiculturalism in favour of some sort of Australianness.

No: we are absolute skeptics about all of that. We know the history.

Australia First Party rejects any notion that the Cornish Liberals are any sort of ‘faction’ in the party, or that they are “breaking away” as one observer put it, or that they are “hard core” like us as another said. We know that this so-called faction is really just a face of the Liberal Party itself, one which floats out their the picture of ‘Pig Iron Bob’ Menzies, talks of the conservative past and family values and social integration, but which is just a tool to bind one class of its supporters to the Liberal Party as voters and activists. The current version of the ‘faction’ was set up in 1996 to stabilize the party when Pauline Hanson was an emerging force and possibly a challenge to the two-party game. In truth, Tony Abbott himself was at the initial planning meeting that set up the faction. Why would such a ‘faction’ be breaking anywhere? Its earlier version that ran from 1974 to 1991 never ‘broke away’. Why would its current version do so? Indeed, its very purpose is not to ‘break’ certain of the Liberals clients towards any sort of challenge to Liberal Party ideology and politics (even a watery one), but to keep these people in the loop.

We had a hint of that from Councillor Cornish on November 3 when he addressed people outside the chambers. He said that his future daughter in law was to be a Muslim, that Penrith welcomed integration of all in its diverse population. He said that Penrith had Hindus, Buddhists and others, and that all were welcome and the current Mosque questions had nothing to do with “racism”. All this chatter means that the ethnic defence of Australians and their culture, a people of European ethnos and culture – is not on his agenda. All that is on his agenda is something to do with integration at a time when the Liberal Party government is involved in wars in Muslim countries.

Our position is always clear. The pseudo politically correct Cornish does not impress us in the least degree. We are not here to preach the integration of all and sundry into a ‘colour blind’ conservative Australia. No. We represent the Australian People alone. It is chalk and cheese.

What is now really decisive is the path is taken by the Penrith patriotic people. Do they want Mosques in Penrith or not?

Australia First Party has the Victor Waterson election campaign for the State electorate of Penrith as one potential rallying point in focusing public anger and action. Yet any election campaign is incomplete unless moulded in with a grassroots community action campaign. It is because our party understands that the exercise in Mosque building is part of a Liberal agenda of culture-bust that we can organize against the bigger picture. Once the Mosques are built, people demoralized, culture relativised and all things of culture-change normalized, the Liberal State government can get on with the explosion of population planned for the Nepean area, the creation of a new Penrith CBD and a new little China in Western Sydney. Does Councillor Cornish and his Liberal conservatives oppose any of this?

Our party offers the Penrith patriotic resistance a way forward. It is time to construct at the community level a movement of civil dissent and resistance directed at Penrith City Council and which can keep all community resistance live. That resistance should have as its first battle, a decisive rupture with the Action Group and the Cornish Liberals.

In our next article we will explain to our readers what this method of people’s struggle will involve and why it is the path that preserves the heritage and identity of Penrith.

Controversial plans for a new Islamic prayer hall at Kemps Creek, in Sydney’s west, have been given the go-ahead at a meeting that followed clashes between up to 100 protesters.

At a special meeting of Penrith Council on Monday night four councillors put forward a motion opposing the new prayer hall, but it was defeated by 10 votes to four.

Outside council chambers before the meeting there were angry exchanges between a group opposed to the prayer hall and another group against anti-Islam and anti-racism sentiments.

About 180 people then packed into the public gallery and there were several interjections throughout proceedings.

Three community members in favour and three against the Islamic prayer hall development addressed Mayor Ross Fowler and councillors about their concerns.

Those speaking in support of the prayer hall were yelled at by members of the public gallery.

The mayor had to remind people sitting in the gallery several times to keep calm and respect the speakers. At one point, Mr Fowler was sworn at.

Outspoken Liberal Councillor Marcus Cornish, who is against the prayer hall, said it would bring more crime to Penrith.

At one point, Councillor Cornish refused to sit down after the mayor asked him to.

Greens Councillor Michelle Tormey also told the meeting that on her way inside the building said she had been threatened by an anti-Islam protester who said he would “stab her in the stomach” if she voted in favour of the prayer hall development.

More than a dozen police officers and a large security presence separated the protesters who exchanged insults.

Several protesters against the prayer hall held up signs with Nazi symbols or slogans such as “Islam a crime against humanity”, “Say no to Sharia” and “Think of Penrith’s future”.

Protester Nick Folkes said the group was there to support local residents who did not want the prayer hall to go ahead.

He said the council had already approved two mosques in two weeks and they believed it would change the local community.

“Islam is a challenge to our way of life,” Mr Folkes said.

“It’s not just the mosque, it’s the political ideology they have in store for us.”

However, the group in support of the hall said Muslims and the prayer hall were welcome in the area.

“Smash the savage racist attacks on Muslim and non-white ethnic communities,” the group in support of the hall said.

They also held up signs which said: “Racism is unacceptable, Muslims are welcome”, “Racism – the enemy of freedom” and “Don’t keep calm and fight Islamophobia”.

Police said there were no major incidents and no-one was arrested.