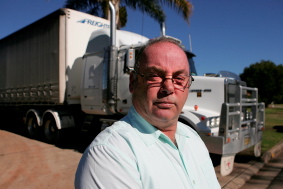 The Australia First Party has nominated Mr. Mick Saunders for the Federal seat of
‘Lindsay’ in this year’s poll.

Mr. Saunders was a candidate for the party in the State by-election for Penrith in 2010, for Lindsay in the last Federal poll and as a member of the  ticket for Penrith City Council which saw Maurice Girotto elected for East Ward in 2012.

Mr. Saunders, who lived as a child in St. Marys, lives in Lindsay with his family and operates an owner-driver transport business.  In 2008, he was instrumental in the National Truck Shutdown.

The Australia First Party is committed generally to its full  Community And Electorate Programme which can be viewed its main website:  www.australiafirstparty.net

The Lindsay electorate program for Australia First Party is being drafted currently,
but involves:

1.  For Citizens’ Initiated Referendum – where you, the voter, can propose not only changes to the Constitution, but actual legislation and have it voted upon by all Australians.

2.  Mobilizing our farmers and other concerned citizens against coal-seam gas mining around the Nepean area.

3. Urgent action on homelessness in Far Western Sydney with acquisition of lands to build modern and friendly estates, units and houses.

4. To counter all activities of government and business forces that favour immigration, refugee admissions and contract labour.

“I fear our political elites are changing Australia into something alien to us. I would like to be able to stand up for everyone and state that we want a say instead of being told that this is what is going to happen and that it’s good for us. We don’t allow that logic in our homes so why do we have to put up with it in our country?

There is a population explosion driven disaster that is looming in Lindsay.

We will also see the destruction of one of Sydney’s key fresh food-producing areas.  This also puts unbearable pressure on our already immensely strained services, such as roads and rail that are far beyond capacity now. Development has caused inflated real-estate prices that are only making the developers richer and pushing home ownership beyond the average family.

I stand for infrastructure improvements, but not where it is factored as a means to facilitate a population explosion in Penrith City and Greater Western Sydney.”