By Eureka Stockade Day, December 3, the party’s national office will have processed for ‘use’ in a fresh party registration application some 600 membership forms.

There is no need to explain here the petty bureaucratic rules which surround these forms. Suffice to say, it is a labour intensive job.

When applications for registration are lodged, the Australian Electoral Commission must sight 550 notarised forms.

The national office will continue to process membership forms throughout December, including new forms from members who are currently only enrolled in State party groups and must sign ‘Federal’ forms and from fresh people who have indicated an interest in joining us.

As readers here know, the party also applied for a review of the decision which de-registered us in the first place. We cannot say whether that review will be successful. If it is, great! If not, a new application for registration, is certain to be made.

The President of our party, Dr. Jim Saleam, said this morning:

“I expect that there will be a growing and developing unity among those groups in Australia which are in fact nationalist. Our supporters and friends should expect announcements collectively from us next month to further the struggle against the false ‘civic patriot’ line of certain organisations which are now cluttering the field and misleading many Australians. Yet, we will be compelled to look beyond that immediate unity of purpose. In 2016 we must work towards the actual unity of these organisations.

There is no other option if we are to fully participate in the political struggle. The Australia First Party will prove its viability and mettle in re-registering itself. In the united effort in the struggle against civic patriotism we will prove our co-operative spirit”. 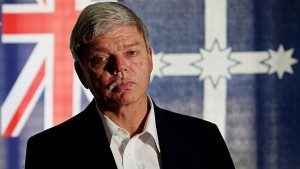 In anticipation of this statement here today, we thank a party member who pledged $1000 to the cause!