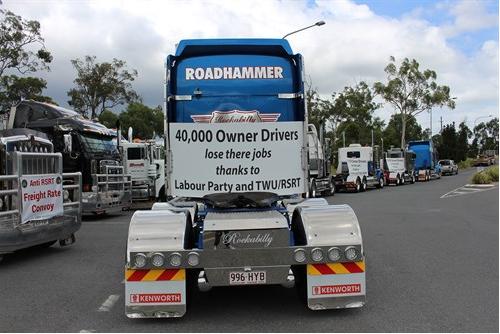 “Furious self-employed truck drivers are planning a protest convoy to take their fight against the Road Safety Remuneration Tribunal to federal parliament, warning that new minimum rates of pay will drive them out of business.

The protest is planned to coincide with the resumption of parliament on April 18. It is being fuelled by anger among thousands of owner-drivers across the country who hope to pressure MPs into overturning the tribunal’s order mandating the new pay regime.

Employment Minister Michaelia Cash has flagged legislation to freeze the pay rates the week parliament resumes and has given the green light for owner-drivers to “get your trucks out and, if you have to, do a convoy to Canberra”.

“The government has five of the six crossbench votes it needs to pass its bill. The three undecided crossbench senators are to hold meetings in coming days with the Transport Workers Union and National Road Transport Association, the lead body pushing to axe the tribunal.

Australian Trucking Association chief executive Christopher Melham confirmed a convoy would arrive in Canberra on April 18. “The ATA’s own safety truck will take the lead of the convoy, and I’d like to invite minister Cash to ride with us in the safety truck’s passenger seat,” he said.

Queensland senator Glenn Lazarus is also helping to organise a convoy for Sunday, April 17, for which permits have been sought for drivers to park around the parliamentary circle and gather on the lawns of Parliament House, where he will address them at 11am. The organiser of the Sunday convoy, Gordon Mackinlay, told The Weekend Australian he hoped at least 200 fellow owner-drivers would join him.

“One of my associates has got us a permit with police to do it, so it will be all legal,” he said.

“A lot of us will sleep in our trucks at Yass the night before.”

Protest convoys are also being planned in major cities at 12pm on April 18 for those who cannot travel to Canberra. Independent Contractors Australia executive director Ken Phillips, who is launching a High Court challenge against the tribunal, said: “If they’re going to do trucking blockades, don’t just do Parliament House. Go and do the protest with your trucks outside ALP headquarters, Greens headquarters, the tribunal’s headquarters and the headquarters of the big trucking companies.”

Independent Victorian senator John Madigan, one of the undecided crossbenchers, is holding a town-hall meeting in Ballarat today. He told The Weekend Australian that TWU national secretary Tony Sheldon would explain the new pay regime to owner-drivers and respond to their concerns. He expected hundreds of drivers to attend.

“It seems on face value at the moment that there are mistakes and some bad consequences from this legislation,” he said.

“We need to get this sorted out now, not in a month’s time. This affects individuals, their lives, their partners, it affects small communities. If we don’t get this right, it could be devastating.”

Independent Tasmanian Senator Jacqui Lambie has not indicated whether she will support the bill to freeze the new pay rates but has scheduled meetings with Mr Sheldon on Monday as well as ¬National Road Transport Association chief Warren Clark. Motoring Enthusiast Party senator

The fury over the tribunal’s new pay regime is unlikely to result in a blockade, as happened in 1995 when timber workers formed a ring around Parliament House, forcing prime minister Paul Keating to walk to work.

“The Australian Trucking Association will lead the way in a Convoy to Canberra on Monday 18 April to protest the introduction of the Contractor Driver Minimum Payments Road Safety Remuneration Order 2016 (RSRO).

The RSRO came into effect yesterday afternoon, after the Federal Court decided not to continue a stay on the order. The Convoy supports Federal Employment Minister Michaelia Cash’s call for industry to show their support for legislation delaying the order, which will be introduced to parliament on 18 April.

ATA Chief Executive Christopher Melham said the Order would have a devastating impact on tens of thousands of owner-drivers and other small operators.

“The ATA’s own Safety Truck will take the lead of the convoy, and I’d like to invite Minister Cash to ride with us in Safety Truck’s passenger seat,” Mr Melham said.

“The ATA is proud to organise this Convoy to Canberra. It’s essential that Ministers and Senators understand just how many small operators will be threatened by this payments order.”

Further information about the convoy will be announced early next week. To register to be part of the convoy, email the ATA at ata@truck.net.au.

‘Owner-drivers got behind the wheel to protest minimum rates’

“Owner-drivers have gathered to send a message to the Road Safety Remuneration Tribunal.  Truck drivers have taken to the streets south of Brisbane to protest the introduction of minimum pay rates for owner-drivers.

Close to 100 people rallied at Berrinba and then took part in the convoy to publicise their concerns about the impending scheme, which will require owner-drivers to be paid set hourly and kilometre rates from April 4.

The measure, from the Road Safety Remuneration Tribunal (RSRT), is designed to ensure owner-drivers receive a viable rate to do their job safely and make a living. However, critics are concerned the scheme will lead to owner-drivers losing their livelihood instead.

Trucks taking part in the Anti RSRT Freight Rate Convoy were decked out with banners proclaiming minimum rates would spell the end of owner-drivers. The vehicles wound their way through Berrinba and out to the BP service station at Archerfield.

The rally attracted political support, with Queensland senator Glenn Lazarus speaking at the event to declare he would fight against the RSRT’s plans.

“At the end of the day I am going to make as much noise as I can possibly make about this because this is absolute bullshit what they are doing to you guys,” he told the assembled crowd, which broke out in claps and cheers in response.

Owner-drivers rallied today to protest the introduction of minimum rates.

Owner-driver Rodney Chant, who runs Chant Trans and played a hand in organising the convoy, urged all owner-drivers to get involved to delay the introduction of minimum rates.

The RSRT is due to decide before the end of March if it will postpone minimum rates until January 1, 2017 and phase them in gradually. It has given the trucking industry until 12pm, March 21 to lodge written submissions about varying the start date.

Chant told the rally a delay would give owner-drivers the chance to restructure their business to comply with the requirements of the RSRT’s ruling.

“We need to get those submissions [in]. It is so important each and every person here states their case,” Chant told the rally.

“We’re not going to stop this order but if we make enough noise to the right people in the correct manner, and by numbers…that’s what we need.”

Organisers of today’s rally handed out information packs and had people on hand to help attendees write submissions. Most attendees were mainly concerned about minimum rates pricing them out of the market for work.

Sections of the trucking industry have argued the RSRT-mandated rates are too high and will encourage businesses to use large transport fleets instead of owner-drivers.

Furthermore, many in the industry are still unaware about the scheme even though the RSRT announced it in December last year to give affected parties four months to prepare.

Many people at today’s rally reported only becoming aware of the RSRT’s order in the last three weeks.

The lack of awareness has been a key argument put to the tribunal as to why it should revise the April 4 start date.

The Australian Industry Group, NatRoad, the New South Wales Business Chamber and the Australian Livestock and Rural Transporters Association believe not enough information has been provided to the industry to help it prepare.

Today’s rally followed the RSRT’s hearing on March 15 about applications to vary minimum rates. Owner-drivers and their supporters tried to use the hearing to air their concerns about the RSRT’s plan, but they struggled to be heard.

Owner-drivers are concerned minimum rates will send them out of business.”