Throughout our great nation Australia in the smallest of traditional towns can be found a Mechanics’ Institute – a local community building for locals for self-education, technical skills training and personal advancement. Sometimes called a Working Men’s Institute, Mechanics School of Arts, or Athenaeum; the concept originated in Edinburgh to “address societal needs by incorporating fundamental scientific thinking and research into engineering solutions.”

The world’s first Mechanics’ Institute was established in Edinburgh in October 1821 as the School of Arts of Edinburgh (later Heriot-Watt University), with the provision of technical education for working people and professionals.  The school revolutionised access to education in science and technology for ordinary people.

As many Scots settled in colonial Australia, mechanics Institutes were established for the local men by local land holders come philanthropists.

From the 1850s Gold Rush, Mechanics’ Institutes quickly spread throughout Victoria wherever a hall, library or school was needed.  They each respectively provided local lads with necessary practical and technical skills not taught in schools, and so kept the local lads local for the broader benefit of the local community.  It allowed Ordinary Australians to become financially independent in thinking and skills working on the land and in their own community, rather than relying on the wealthy classes and so break from the old English class system.

Over 1200 Mechanics’ Institutes were built in Victoria but just over 500 remain today, and only six still operate their lending library services.

The Mechanics’ Institute is a symbol of local pioneering ingenuity, self-education.  Many these days regrettably are under-utilised, despite governments systemically abandoning vocational education across Australia in favour of cheap foreign scab labour to replace Aussie jobs.

The Mechanics’ Institute needs to be revived throughout Australia for the following local multi uses: 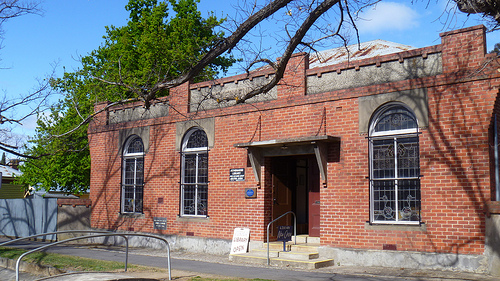 Local business philanthropists involved with groups such as Lions and Rotary ought to make this a national project, like in the 1820s.