The Australia First Party was reconstituted in September 2007. The party has contested
several polls at different levels of government.

The rebuilding of a nationalist vote has been a slow process after the effective
collapse of the One Nation party (which took much of that but directed it in a more ‘conservative’ direction) and the former Australia First founded by Graeme Campbell.

Some data is provided. Limited comment is given here on the conditions behind each
vote score.

However, in this first poll, it was clear that Australia First Party was regrouping
nationalist minded people. The higher tallies indicated potential to move the party from ‘fringe party’ (less than 2%) to minor party (4 %– 10%)

In June 2010, in a by-election in Hawkesbury City, the candidate Mr. Tony Pettitt,
received 3004 votes for 9.34% This was a strong showing and it surprised the party’s critics.

The party had achieved by then the technique of localising its politics, rendering
national issues that affect all into a local message.

Australia First contested the 2010 federal election fielding four candidates for the
House of Representatives and two candidates, Peter Schuback and Nick Maine, for the Senate.  The party had only recently been registered and its effort was designed to promote the party.

Australia First obtained 9,680 votes in Queensland for the Senate. This was achieved
without any real finance and was considered good for a first effort.

The Australia First Party candidates for the lower house and their results were as
follows:

In October 2010, Australia First ran a candidate in a Sutherland Shire Council Ward
D by-election election. The AFP candidate, Matt Hodgson, obtained 932 votes or 4%. On this occasion, Australia First was competed against by another candidate who echoed AF positions and who obtained 2.5%

Shortly after, in May 2011, John McGrath was a candidate in the Palerang Shire
Council by-election.  He won 6.1% of the poll. Again, this campaign represented the impact of the strong localization of party attitude: the Murray-Darling water fraud, the plan to increase population in the Shire and the threat to our heritage and identity.

Australia First Party was well placed to receive positive results in 2012 and
achieve the election of our Councilor for Penrith City – Maurice Girotto.

As reported elsewhere on this site, the party had success in Hervey Bay (19%) and
Maribyrnong (5.34%) indicating that the trend to nationalist voting was a national one. 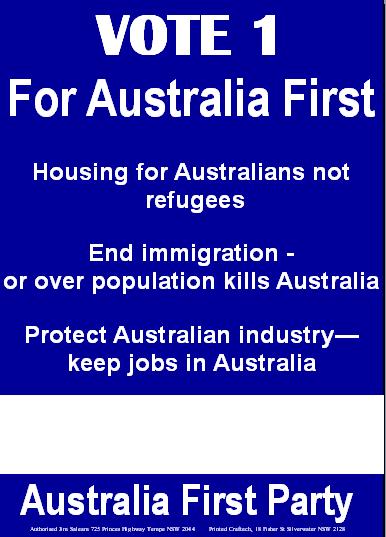