Yes, the Blue Mountains, as cold as they are that time of year, have local homeless people trying each freezing night to grapple through another bitter winter.

But the big problem is that the Blue Mountains City Council also knows about these desperate local, yet distainfully, nightly ignores them. And Council has just erected an expensive high steel fence around its cheapest accommodation – its caravan park, to keep the poor out.

This Liberal-Labor-Greens dominated Council snubs the vulnerable of Blue Mountains’ society.  Their Party Politics is too self-centred, arrogant up in fantasy land absorbed in pet multi-million dollar decadent schemes.  They show scant interest to toss a coin to the local homeless on their doorstep.

Also out of sight in their homes, many ordinary Mountains folk live in Breadline Poverty, in rent stress, undernourished and one step away from homelessness.

Whether caused by family stress, domestic violence, addictions and/or just the hounding rising costs of living, ordinary Blue Mountains folk  (like many struggling Australians) live on the brink.

This is Australia’s corrosive private suffering, hidden from the public street and neighbourhood.  Yet poverty has become all too real and prevalent. And this is Australia in 2012. Centrelink is but false hope.  It is but arrogant government hand-to-mouth crumbs to an underclass that it considers a cost and liability.   Compare the crying federal billions handed to 2 star luxury for illegal foreigners on Christmas Island.

Council’s current problem-avoidance bandaid is to palm these vulnerable people off to the nearest local motel intended for overnight tourists – the G’Day Motel across the highway in Katoomba. 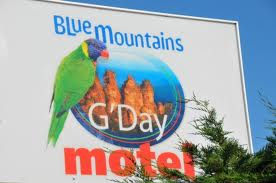 Council abandonment of local homelessness is a disgrace. Some staffer probably looked out his Council chambers ivory tower window and saw the G’Day Motel across the highway and so suggested:  “just chuck ’em over there!”

The incumbent Council cronies are festering leeches.   Go along to a Council meeting and watch the aristocractic snobs enraptured in feathering their own party political nests.  LibLabs have no Breadline Poverty agenda.  They want to jack up rates and see more go to the wall.  The Greens have added their Carbon Tax.

Local Council now wants to sell community land in Blackheath that it has no democratic right to sell or to privatise.  The LibLab plot is to fund a second decadent multi-million dollar LibLab Taj Mahal in lower Mountains Springwood, to emulate the Upper Mountains Katoomba Taj Mahal.  Financial frugality would see a sustainable Council lease the massive new Springwood Sports Club across the road.

But no, the big ego Liberal Mayor wants his way.  He can gesture about opening a State Government funded office for Wentworth Community Housing, but then commits $3.2 million in ratepayers money to set up Blackheath’s community land for housing development, all to fund his pet Springwood Taj Mahal…

This aristocratic war needs to be fought!  Australia First is committed to Australians first.

Upon getting voted on Council, our top priority is to look after our most vulnerable locals – to secure immediate family-suited transition accommodation in Katoomba for Blue Mountains homeless.

As for foreign refugees and off-Mountains folk, they need not apply.

This remains our timeless pledge to Australians