Well, well. It seems that the Liberal Party is sure to recycle former Federal MP, Jacki Kelly, to run in East Ward at Penrith City in the September 8 election.

Yes of course, given our essential position which is against the immigration-led population explosion planned by the Liberal State government for Penrith City, a so-called “conservative” with a quirky history on the subject of immigration would be a useful ruse.  After all, her hubby was caught out issuing bogus ‘anti Islamic’ election leaflets some years back. Fielding Jacki might deceive the electorate that she was not so in tune with the Liberal hierarchy and is willing to stand up for Australians against the population deluge that will change the nature of Penrith City forever.

Yet the event of her candidature, loaded as it is with the subtle nuance of a subterranean political struggle that has raged for decades, might rebound and prove of real service to our lead candidate, Maurice Girotto. It might just bring the immigration-population politics of the Liberals into the open, but only if we struggle to make it so. The Liberals have resorted to an old deception-politics and it can be difficult indeed to drag out the truth.

Needless to say, we’ll do the ‘drag-out’, better than a Chinese Red Guard with a university professor on a leash.

Yet, what a story this dirty war has been. I must refer to a sometimes open but also largely covert struggle between the Liberal Party ‘hard Right’ now led by upper-house MP, David Clarke – and the various nationalist minded parties and groups in this State. This struggle has gone on since 1975 and has usually taken the form of Mr. Clarke’s group privately claiming to potential patriotic dissidents that they really think the same thing as the dissident, but are secret about it, that they are us and we are them, and only if we’d pack up and join the Liberal Party and ‘take it over’ silently from the inside, can we hope to make for political change. And some of us were promised that we could become important Liberals too, if we all just played. Unfortunately for the Libs, we just didn’t play. This fraud was offered to innumerable groups; in fact, this writer was approached too, by Mr. Clarke himself no less, way back when I was a student. Just a few years ago, even the president of One Nation was approached by a ‘hard’ Liberal and given 500 Liberal Party membership forms and the promise that if they joined the Libs, Little Johnny Howard would do it all. 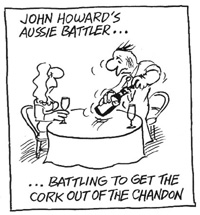 The Clarke scam was originally operated by anti communist migrant activist and quality fakir, Lyenko Urbanchich, from whom Mr. Clarke took over his Liberal Party ‘faction’ about ten years ago. In the 1970’s and 1980’s some in the Liberal Party played at being the anti communist hardmen. If you didn’t like the Left in our country, then they said they were for you. In the 1990’s when Pauline Hanson emerged and communism had taken a nosedive, they played at being hard conservatives in the culture wars with the left-over Left in media and academia and pro Aussie culture and so on. They said they would guard Aussie values better than One Nation. So much so, that they ran agents in Hanson’s party who are now all back ‘home’. They had to make sure that Liberals didn’t defect to Hanson, then use Hansonism to get what they wanted and when Hansonism had run its course, reel back in any useful idiot home to the Liberal Party.

As old Lyenko in his Slovenian accent stammered at a meeting one night thirty years ago, whilst trying to con a group of patriots into his anti communist game waged to supposedly win back the Liberal Party from the softie lefty trendy types who’d joined – “vee arzz ze Liberal Party”  and “vee vill take back our conservative party.” And ain’t that the eternal truth. The faction was always just a face of the Liberal Party, something ticklishly clandestine and full of intrigue, a devious ‘conservative’ politics for idiots who don’t understand an old royal party game called – masque.

This story has been one of those pieces of political history unrecognized by the public. I suppose some of our critics know it; the academics know it. Naturally, we Australia First activists know all about it. We’ve all had to fight it over the years and we’ve recorded its history step by step. The last time the game came to me personally was not too long ago; I had some Young Liberal fool approach me to ask me to read Mein Kampf, so I could get the low-down on what he was doing about founding a militia and how he would do so in tandem with me and Australia First. What the ….. ?? I’m still wondering what the game was. Maybe me thinking what the game was – was actually the game? One thing I do know, I am not a medical doctor so I couldn’t have prescribed him anti-psychotic medicine. I just showed him the door.

So once again, we face off. It’s show time again. The scene is Western Sydney. It’s the most ‘working class’ of Penrith City’s wards where services and transport and housing are under stress. The ward is crawling and buzzing with the collective face of the new migration. People fear going out of their homes at night and crime and drugs run amok. How convinced are we that Jacki Kelly has been put up to allay community concerns – while the Libs just make it all far worse? Try – we think that absolutely! It is no secret that the Labor Party vote has collapsed in Penrith City and it’s true to say that Jacki Kelly had some appeal to Labor voters. If Labor was shedding votes, then it’d be fair to say that Australia First must not be permitted to soak then up.

To stop Girotto from winning and to avoid this and any other embarrassment, the Liberals have been forced to play a card, a good card, a Queen of Hearts. Yet it creates a level playing field where the motives of the Liberal machine are visible and the battle-lines clear.

We say that it is no accident that David Clarke’s ‘hard Right’ Liberal faction would sponsor Jacki Kelly. During that fateful Federal poll when Jacki Kelly’s husband was printing ‘anti Islamic’ leaflets and letterboxing them late at night, the Liberal Party was peddling a little anti Islam as essential blather given John Howard was all for the war in Afghanistan and for rorting the trillions of dollars of rare minerals found in Afghanistan that the “western economy” still needs.

A little anti Islam convinces the naïve that the war might be worth it. Don’t go too far of course and stir a real immigration debate; keep it ‘in house’ and bring in the useful idiots.

But the blunderers got caught. This time, the Libs will peddle Mrs. Aussie Battler who is there to build a safe community and protect Aussie values. We intend to make sure that the scam gets nowhere at all.