One in eight Australians is living in poverty according to a 2012 report by welfare organisation the Australian Council of Social Service (ACOSS).

That equates to more than 2.2 million people living below the poverty line in Australia and close to 600,000 of them are children.  In a wealthy country like Australia, this is simply inexcusable. 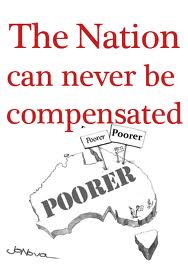 Under both Labor and Liberal governments in the past two decades, both head long enraptured in economic growth dogma, poverty has increased in Australia.  So much for Bob Hawke’s empty promise to get re-elected in 1987…”by 1990 no Australian child will be living in poverty.”

And what is the Foreign Labor Party doing now under the Welsh Moll – encouraging more illegal arrivals to suck on Australian welfare!    Labor is supporting so-called refugees, while our own internal refugee problem escalates.

Australians know where Foreign Labor priorities lie – with foreigners at the expense of Australians.

Australian single parents have seen their child allowance ripped from them under Miss O’Ginny.   ACOSS reports that now that 300,000 children living in poverty are with sole parents.

Then we have the Salvation Army diverted from supporting Australians living in abject poverty, to supporting illegal boat arrivals.

On its website, the Salvos boast about “operating a migrant and refugee assistance programs in each state”.    The Salvos “offer a range of different programs including financial and material aid, personal support and access to mainstream community networks…reinforcing our internationalism.”

The Salvation Army even operates on Nauru and Manus Island doing the Labor Government’s  job of looking after illegal boat people and saving the Labor Government millions in the process.  The Salvos there are more worried about leaky tents for Sri Lankan illegals than Australian families sleeping in parks and in cars.

What is the Salvation Army doing the job of Serco in detention centres?

On top of the billions committed by Defence, Customs, and Detention Centres around Australia, Australia’s Immigration Department has funded the Salvos $75 million in Australian taxpayers’ money to care for illegals offshore.  This should come out of our foreign aid budget, which Rudd, Carr and Gillard have long blown.

The Salvation Army has become an arm of government and deserves no support as an Australian charity neglecting our own vulnerable citizens at home. 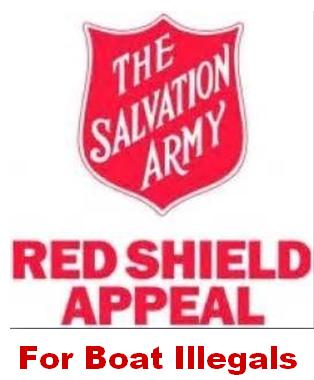 A recent report by the Salvation Army shows a 9 per cent increase in demand for its help in the past year.  No wonder.  That 9 per cent is made up of economic illegals from Sri Lanka and Afghanistan seeking the good life downunder.

Australians feeling charitable should ignore the Salvo’s Red Shield appeal this year and send them a clear message that we are not supporting their betrayal of Australians.

Instead, Australians should donate to The Smith Family, Australia’s own national independent children’s charity helping disadvantaged Australians to get the most out of their education, so they can create better futures for themselves.

Australia needs to break the cycle of disadvantage at home.  Charity begins at home.

Australia is not a welfare agency for the Third World, else we’ll be overrun.  At the rate of 20,000 illegal boat arrivals a year under Foreign Labor, Australia is being overrun.