The Victorian Legal Services Commissioner has decided not to investigate a complaint against a solicitor (sic), the notorious self-proclaimed investigator-hero and one-time anarchist, Luke McMahon.

I produce the official answer to the complaint below, if only for the dark amusement of all. The complaint was rejected on the technical ground that the conducting material cited is more than three years old (although some of it was certainly part of a stream that carries on into the present).

Whatever the case, I complained. I will continue to do as the president of Australia First, regarding any person who, like McMahon, has affected the life and political activity of any member of the organisation. For the record, I was also defamed by Luke McMahon who was previously an occasional scribbler for the former Fairfax network, now subsumed into Nine Entertainment.

And in saying that, I note that Luke McMahon is closely bonded to ‘Slackbastard’ (Professor Rob Sparrow of Monash University), the anarchist leader – and Nick McKenzie, Nine Entertainment’s own and well-promoted hero-investigator of honey-trap neo-nazis, a curiosity of a man who is more than pally with the Director General of the Australian Security Intelligence Organisation.

In our country, media defamation and the power of media groups to do as they wish often go unchallenged. But Luke McMahon is now a solicitor with Legal Aid and is responsible for representing the deserving in our courts. Heaven help the accused! It will be my business to refine the evidence and come again at Luke McMahon. Doubtless, he will say that this is an oh-so-malicious bad attitude, which means any complaint from me would be vexatious. But facts will be facts and this bloke leaves them scattered all over. 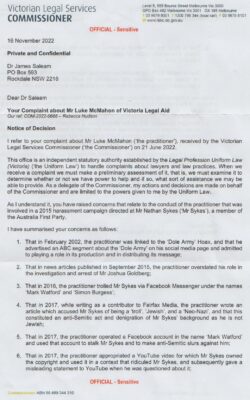 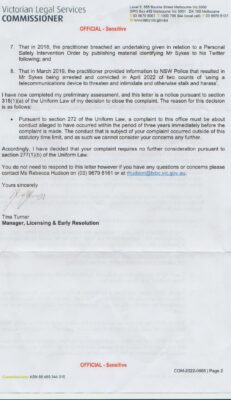