Are you an Indian student or worker on a working visa in Australia and wanna make some extra coin?

Pyne will pay millions into your bank account up front.  All you need to do invent a private college and find anyone in the street who wants a free laptop.  Get em to sign for the laptop and use that signature to enroll them as a diploma student. That’s it!

Send your student list to Pyne and he will transfer cash to your bank account.   You can claim up to $90,000 per student under Pyne’s VET-FEE-HELP scheme.   Once a loan is approved, the Federal Government pays the college direct, with the majority of funds transferred before the student enrolment census date which falls early in the semester.  Pyne’s office pays the private education provider directly and up front.  No-one checks the student actually does any course. 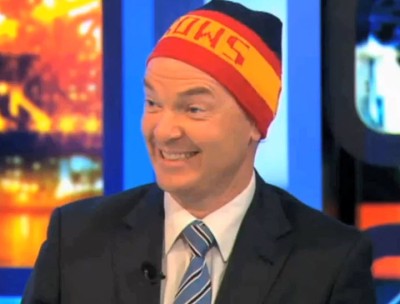 But just make sure you target people who will never earn $53,000, otherwise Pyne will get the tax office on to them.  This way they will never have to pay any debts.   Obvious targets are the illiterate, immigrants who can’t speak English, the homeless, the intellectually disabled, the elderly, Aboriginal housing missions.  You get the idea.  Spruik free laptops outside Centrelink.

As Liberal Federal Minister for Education and Training 2013-2015, Pyne has presided over higher education and training in Australia.  Pyne adoped VET-FEE-HELP following successive Labor attempts to socially re-engineer Australia’s tertiary education; first by Whitlam, then Hawke, then Gillard.  Whitlam made taxpayers fund the lot, Hawke cut back with ‘HECS’ pushing out the cost as ‘student loans’.  Julia Gillard expanded the scheme to diplomas and to private operators.  Those who had a hand in the scheme were Labor Education Ministers Chris Evans, Chris Bowen, Craig Emerson, Kim Carr, Simon Crean and hey, Billy Shorten!

Within a few months of Rudd Labor sweeping to power, in October 2007 one entrepreneurial Indian national, Amarjit Singh, founded his private college in immigrant Sydney which he named Unique International College. He became CEO and rented level 1 at 60 South Street in Granville in the epicentre of Sydney’s ethnic west.

According to the college’s website it maintains a relationship with the Australian Catholic University.  “Nationally recognised courses, highly qualified teachers, accessible location”

And here’s the reality in Granville:

(the top floor above Silly Willy’s)

For the year 2014 alone, Pyne paid this Granville college $47 million through his Department of Education and Training office in Canberra.  The Indian CEO netted a profit of more than $11 million in just half that time (six months).

Years and billions later, in October 2015, the Australian Competition and Consumer Commission (ACCC) and the NSW Fair Trading Department have alleged that the Unique International College in Sydney’s western suburbs engaged in “unconscionable conduct” in pushing disadvantaged students into signing up for courses worth up to $25,000.

It’s only because a few honest students came forward.

The ACCC will ask the court to make the college repay the $57 million it has received to date in Commonwealth government funding.
In one instance, a 19-year-old disabled man who was under the full-time care of his grandmother was allegedly signed up for thousands of dollars in Commonwealth debt despite not being informed of anything about the course or the private college that was providing it 400 kilometres from his home in Wagga Wagga.

Yep, agents for the college (Indians on 457 visas wanting extra cash) were engaged on commission to recruit illiterate and disabled “students”.  They netted thousands of dollars in loans from Pyne’s VET-FEE-HELP scheme to fund courses they were never told they were being signed up for, documents lodged in the federal court allege. 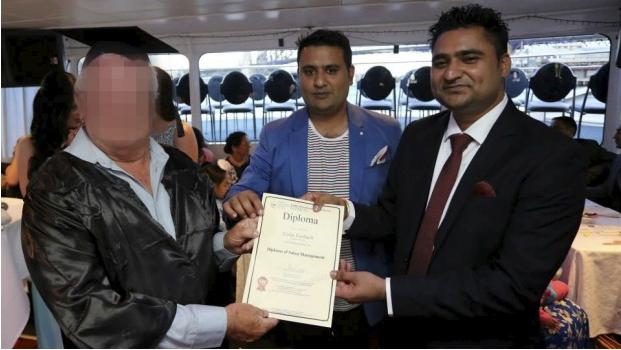 The company’s founder and CEO, Amarjit Khela, presents one of his students with an Indian diploma.

The ACCC’s statement of claim filed in the Federal Court on Tuesday reveals the students that were allegedly targeted by the college were often from Aboriginal housing missions in the state’s most disadvantaged areas such as Walgett, Boggabilla and Bourke.

Sales agents would allegedly enter their houses, enticing students and their families with free laptops and would then ask the students to sign a series of forms that they could not understand.

Students were allegedly told nothing at all about the courses or that the courses in salon management, marketing and business management were free as long as they never earned more than $50,000 a year. Only 2.4 per cent of Unique’s students graduated between July and December 2014, the ACCC alleges.   Christopher Pyne was Education Minister at the time.

In another case cited by the ACCC, a 66-year-old Indigenous woman who could not read or write when she left school was allegedly targeted by Unique College’s sales agents to complete an online course despite the fact she had never had an internet connection, a laptop, email, or any reasonable means by which to pay the course fees. 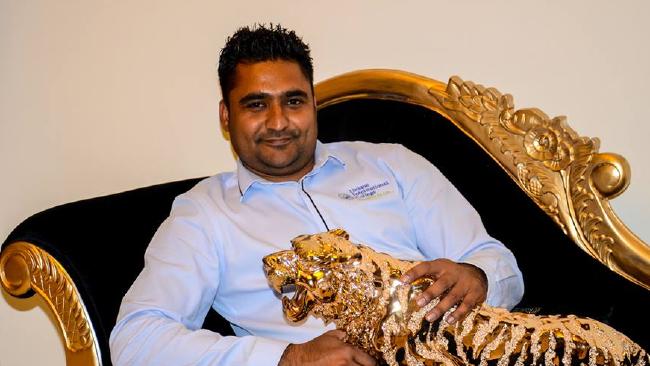 Amarjit Singh: one of Christopher Pyne’s slumdog millionnaires thanks to VET-FEE-HELP

As Education Minister 2013-2015, Pyne forked out $1.3 billion in Australian taxpayers money to shift payments from government tertiary education (universities and TAFE) to private colleges.  It was part of Hockey’s budget emergency phase.

Labor’s Kevin Rudd first came up with the LAPTOP SANTA idea in 2007, under the notorious Digital Education Revolution – Der!  He handed the Santa job to Julia Gillard and Verity Firth in Sydney with a budget of $2.2 billion for laptops to be gifted to 50,000 year 9 to 12 students Australia wide, whether they wanted one or not.

Video games took off.  It was one of Rudd;s many wacky spend ideas,  This one was imaginatively called, “One Laptop Per Child in Australia”. Go Kev!  Except the implementation went awry and the money ran out, so lots of kids missed out and got pissed off.

What happened? Widespread rorting. With little regulation to protect students, unscrupulous providers rushed into the marketplace, luring unqualified students into courses with offers of cash bonuses, laptops and tablets. Enrolments exploded by 300 per cent, blowing out the state’s education budget.

Since 2013, public TAFE colleges have been a wake up to the surge in shonky private operators encouraged under the Liberal’s privatisation of higher education.  Dodgy private colleges and their army of 457 visa imports have been spruiking free laptops, prizes and other inducements to attract students so that they can reap millions from VET FEE HELP scheme.

Your tax at work!

Low-life marketeers from these private colleges linger outside Centrelink offices as well as outside referral services for the homeless and drug addicted.  Telephone agents get student details from job websites or disability programs in order to target them for new enrolments.

When Jacqui Whitehead’s son was recruited to a business management course she became suspicious.  Her 24-year-old son Lukus has a diagnosed intellectual disability and autism spectrum disorder. The Adelaide man completed year 10 with a special life skills qualification for people with a disability. 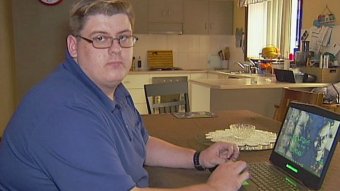 He was signed up for a diploma in business management by recruiters for Aspire College after being targeted outside Centrelink.

Once it was clear Lukus was struggling Mrs Whitehead rang the school, to inform them he had a disability. Lukus also asked for an extension so he could finish his assignments.

“He told them he had a disability. They told him it didn’t matter [and] it wasn’t an excuse,” Mrs Whitehead said.

The college’s response to Lukus’ difficulties was to sell him another course. He now has an $18,000 VET-FEE-HELP debt.
Lukus said he signed up to the second diploma in Interactive Digital Media because the course came with an expensive laptop.

“At first I thought I could pay it off if I got the job but then I realised I probably wouldn’t get the job because I’ve done previous courses and they haven’t worked out,” Lukus said.

Lukus is not alone. His brother, who is also autistic has been targeted. Mrs Whitehead said her other son was harassed by telephone sales people from another company after they obtained his details from a job website.

“They were ringing him and hassling him to sign up for a course,” she said.

“I had to ring them back because they were bullying him saying ‘don’t you want a job, don’t you want to further your career’.”
Mrs Whitehead said she is “disgusted”. “I want Lukus to be able to train for his ability so that he can work, so that he can have a job for his capacity.

“I can’t believe they’re allowed to stand outside of Centrelink.  I can’t believe they get money for every student they get to sign up. The Government needs to realise that they’re handing money to these colleges and the kids aren’t getting anything out of it.”

“And the Government’s not getting their money back either because these kids aren’t going to be able to pay for the debt because they’re not finishing the course.”

Singh doesn’t tell his victims that their signature for the free laptop and training actually signs them up as vocational students in a Certificate III in Information, Digital Media and Technology.   Singh doesn’t tell them that the college is to make $5752 an hour and will claim $160,000 upfront from VET-FEE-HELP.

One retiree, Warwick Martell, questioned why he was being told he was to learn skills to equip him for the workforce of the future.

“You’re joking,” he says. “It’d take me eight hours to walk from here to the car, let alone get a bloody job again.” 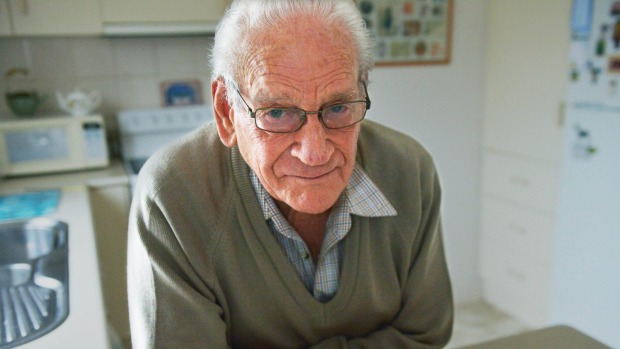 Travelling curry-munchers enrolled Mr Warwick Martell (87) with 60 other residents of his retirement home in a dodgy computer course.

“The [revenue and profit] data seems so amazing that closer scrutiny is im¬portant to establish transparency about how student loans have been issued, and whether there were breaches by private colleges issuing VET FEE-HELP loans,” Mr Riordan said.

In 2013 and 2014, nearly one-fifth of VET FEE-HELP loans have gone to one rapidly growing provider, the Australian College of Training and Employment, trading as Evocca College, a private company which has been at the centre of speculation about a float.  Another company, Australian Careers Network, is set to list on the ASX on November 28 after posting a $25.5 million profit from $50 million revenue in the 2014 financial year.

Christopher Pyne was Education Minister at the time.

It is set to partner up with Careers Australia and make squillions.

Fourth year apprentice Jackson McKee (23) has said:  “There are teachers putting answers on boards and that’s it. Once you take away the challenge of learning then what do you get? Monkeys who can read.”