British-born Governor of Tasmania, Peter Underwood, has abused his Anzac Day speech at the Hobart Cenotaph by callously demeaning the spirit of the ANZACs.

He used his Anzac Day speech to urge Australia to spend less time paying homage to the Anzac legend and more time examining the causes of war and Australia’s involvement in conflicts.  He stated:  “Australia needs to drop the sentimental myths that Anzac Day has attracted. We should spend less time studying Simpson’s donkey and more time looking at why we were fighting in Iraq and Afghanistan for so long,” he said.

Mr Underwood told the ANZAC commemorative service, “..how about diverting some of the millions of dollars that will be spent on the Anzac Festival to provide proper support for the University of Sydney’s Centre for Peace and Conflict Studies.”   He stated this in front of thousands of Tasmanians who had flocked to the Hobart Cenotaph for Anzac Day services to pay their respects to the fallen. 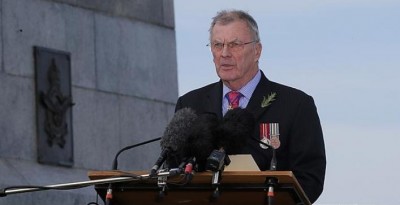 Bloody ignorant poms coming out here and telling us what we should and shouldn’t do, and demeaning our fallen!  Your comments are a national insult and disgrace.

But this foundation has become a lobby group supported by OneWorldist politicians advocating open borders for the world’s refugees, economic or otherwise.  The Greens Clover Moore is a key player in its advocacy.

Underwood seems to be responding to an article on this website posted on the eve of ANZAC Day:   https://australiafirstparty.net/anzac-day-is-about-remembering-but-more-importantly-about-respect-and-recognition/

In the words of official war historian C.E.W. Bean, the Spirit of ANZAC  “stands for reckless valour in a good cause, for enterprise, resourcefulness, fidelity, comradeship and endurance that will never own defeat.”

Colonel Arthur Burke OAM (Ret’d) reminds us that The ANZAC Spirit was epitomised in the deeds of Simpson with his donkey at Gallipoli – comradeship, courage and sacrifice: others before self. It also encompasses the laughter, the pride and the love of life that is in every Australian and New Zealander.

“Today we stand safe and free, clothed with all the privileges and rights of citizens in these great free countries. And all these things – liberty, security, opportunity, the privileges of citizenship – we owe to those men who fought, endured, suffered, and died for us and for their country.”

But it seems Peter Underwood, a Rudd Labor Left appointment since 2008, has stepped out of line as a representative of Australia’s Head of State and done a Quentin Bryce – voicing his own personal cultural-political views at a formal public ceremony.

Bryce’s remarks were inappropriate and a breach of public trust.  Underwood’s remarks were down right insulting.  It is one thing to hold personal opinions about cultural-political issues, but it was a crossing of the line for Peter Underwood as Governor to air his personal opinion publicly while performing a solemn ceremony in honour of the ANZACs on ANZAC Day.

It is unlikely that he will be asked to speak at any future ANZAC Day ceremonies.

The Governor of Tasmania has an entrusted statutory community duty to emphasise that the things that bind the community, not to elicit controversial opinions that risk dividing the community.    It is “to encourage mutual respect, tolerance, support and goodwill.”

On ANZAC Day, Governor Peter Underwood’s personal comments did the opposite.  He only served to insult many Australians.   He would be well served to review the concluding remarks of William Cox concerning the ‘Exercise of the Reserve Powers of the Governor of Tasmania’:   “It must be always remembered, however, that it is a necessary discretion and one which we entrust to the impartiality, good sense and integrity of our vice-regal representative.”

Greater respect for the ANZACs was delivered in Launceston by RSL sub branch president Ken Padman who urged young Tasmanians to emulate the qualities of the Anzacs.  Padman said to the gathering:

Underwood should learn up on ANZAC History 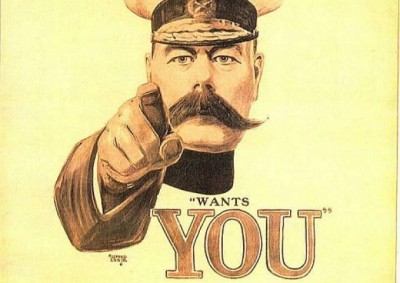 Governor Peter Underwood would dispel his ignorant “sentimental myth notions” by reading up on the true history of the ANZACs.

It was indeed, Underwood’s country of birth, Britain that was responsible for ordering the Australian solders in the ill-fated Gallipoli Land Campaign.

In The Great War (1914-1918), Britain’s Field Marshall Lord Kitchener as Secretary of State for War in 1914 had appointed British General Ian Hamilton to command the Allied Mediterranean Expeditionary Force (MEF) to gain control of the Dardanelles straits from Turkey and capture Constantinople in March 1915.  The MEF included the Australian and New Zealand Army Corps (ANZAC).

British General Hamilton was not given a chance to take part in planning the campaign. The Gallipoli Land Campaign had been previously conceived by First Lord of the British Admiralty, Winston Churchill, together with then Chief of the British Imperial General Staff, British General Charles Douglas.  Irrespective, the Gallipoli Land Campaign, was wholly a British military strategy, decision and responsibility.

The Campaign was a fiasco, poorly planned and badly executed.  The ANZACs dutifully followed British orders to attack in an amphibious assault on the Gallipoli peninsula at Gaba Tepe headland in Turkey on April 25, 1915.

It was a different more innocent time and psyche, but the ANZACs volunteered to fight for the cause of freedom against tyranny; and they did so as Australian and New Zealand volunteers. 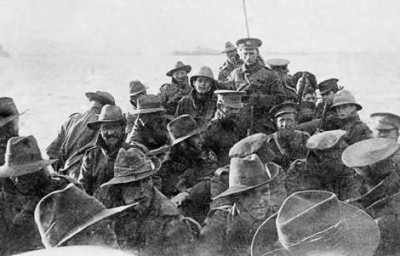 The battle quickly turned into a catastrophic deadly siege on both sides.  Some 744 Australians died on the first day.  For 260 days (8 long months), Australian and New Zealand troops, alongside those from Great Britain and Ireland, France, India, and Newfoundland battled harsh conditions and Ottoman forces desperately fighting to protect their homeland.

By the time the campaign ended, more than 120,000 men had died: at least 87,000 Ottoman soldiers and 44,000 Allied soldiers, including 8709 Australians and 2721 New Zealanders, 33,072 British and about 10,000 French – all up about a fifth of all those who had landed on the peninsula.   Many more were wounded and sustained illness from the summer heat conditions, primitive sanitation, plagues of flies and the outbreak of diseases like dysentery, diarrhoea and enteric fever. More went on to die on the Western Front or return home insane.

In the wider story of the First World War, the Gallipoli campaign made no large mark. The number of dead, although horrific, pales in comparison with the death toll in France and Belgium during the war. However, for New Zealand, along with Australia and Turkey, the Gallipoli campaign is often claimed to have played an important part in fostering a sense of national identity.

The failed campaign was attributed to Churchill and Kitchener, both British.  The ANZACs landed unknowingly on a suicidal beach with impassable mountains in between them and their objective.

More broadly, it was Churchill’s own doing by alienating the Ottomans at the outbreak of war through his arrogant treatment of them.  If Churchill had not treated the Turks so poorly, the Black Sea would not have been closed to allied shipping, and that was the whole reason for the Gallipoli Campaign in the first place.

Song of Gallipoli by Eric Bogle: “And The Band Played Waltzing Matilda”

“Now when I was a young man, I carried me pack, and I lived the free life of a rover
From the Murray’s green basin to the dusty outback, well, I waltzed my Matilda all over.
Then in 1915, my country said son, It’s time you stopped rambling, there’s work to be done.
So they gave me a tin hat, and they gave me a gun, and they marched me away to the war.

And the band played Waltzing Matilda, as the ship pulled away from the quay
And amidst all the cheers, the flag-waving and tears, we sailed off for Gallipoli
And how well I remember that terrible day, how our blood stained the sand and the water
And of how in that hell that they called Suvla Bay, we were butchered like lambs at the slaughter.
Johnny Turk he was waiting, he’d primed himself well. He shower’d us with bullets,
And he rained us with shell. And in five minutes flat, he’d blown us all to hell
Nearly blew us right back to Australia.

But the band played Waltzing Matilda, when we stopped to bury our slain.
We buried ours, and the Turks buried theirs, then we started all over again.
And those that were left, well we tried to survive, in that mad world of blood, death and fire
And for ten weary weeks, I kept myself alive, though around me the corpses piled higher
Then a big Turkish shell knocked me arse over head, and when I woke up in my hospital bed,
And saw what it had done, well I wished I was dead. Never knew there was worse things than dyin’.

The legless, the armless, the blind, the insane, those proud wounded heroes of Suvla
And as our ship pulled into Circular Quay, I looked at the place where me legs used to be.
And thanked Christ there was nobody waiting for me, to grieve, to mourn, and to pity.

But the band played Waltzing Matilda, as they carried us down the gangway.
But nobody cheered, they just stood and stared, then they turned all their faces away
And so now every April, I sit on me porch, and I watch the parades pass before me.
And I see my old comrades, how proudly they march, reviving old dreams of past glories
And the old men march slowly, old bones stiff and sore. They’re tired old heroes from a forgotten war
And the young people ask, what are they marching for? And I ask myself the same question.

Underwood as a pom, don’t dare teach our ANZAC forefathers to suck eggs!