Korea’s appalling ferry disaster of April 16 with its tragic loss of many lives is of a proportion akin to wartime or of Titanic scale for our advanced world in 2014.

The incident and the circumstances associated with the ferry and its shipping firm simply should not have happened in 2014.  Over a hundred years ago, lessons were learned from the RMS Titanic’s sinking on April 14, 1912 off the coast of Canada and the tragic loss of over 1500 lives, two-thirds of the number on board.

But that was an experience by the West a hundred years ago, and it seems emerging nations like Korea have some catching up to do by way of commercial transport standards.  Best practice international conventions, rules and standards across many industries, not just commercial transport, seem to have been given lip service in favour of encouraging inclusion of ‘unready’ nations.

But World Class Standards allowed to be lowered to Third World sub-standards is to everyone’s peril.

The 6,800 tonne commercial ferry “Sewol” with 476 people on board (mostly students) was sailing on a regular short coast voyage on Wednesday April 16 from Incheon, a port west of Seoul, to the resort island of Jeju off Korea’s southern coast.  At about 8:45 am local time the vessel suddenly made a sharp turn, then immediately listed. Within 30 minutes the vessel was overturned and by 12 noon it had all but sunk.  Two-thirds of the passengers were second-year students from Danwon High School in Ansan, south of Seoul.

At this stage, it is reported that perhaps 302, or nearly two-thirds of the 476, have perished. 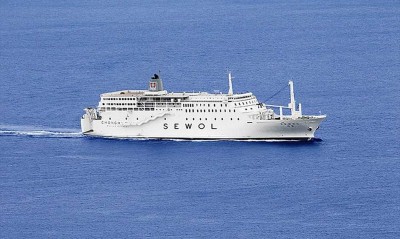 Already, there are media reports of crew negligence, incompetence, failure to respond quickly and efficiently to the crisis and for fumbling during the early stages of rescue operations.

There are reports of contributory factors such as the vessel’s design flaws, a slew of loopholes in safety measures by the private ferry operator, Chonghaejin Marine, and of lax regulatory enforcement.  The maritime inspection agency Korea Register of Shipping had found the Sewol fit to sail, despite a modified design which made the vessel more top-heavy.   Investigators are looking into whether the ferry was overloaded and cargo properly secured when it set sail from Incheon.

Was the Sewol doomed by old school corruption and incompetence like the Titanic?  Is emerging Korea still burdened by archaic 19th Century cultures?    Like much of the emerging Third World, Western standards in government, industry, the workplace, society have not kept pace with the window dressing of rapid economic development. Like in other emerging Asian nations, modern urban cities have sprouted up in a matter of years. Buildings and vehicles were constructed hastily, even if that meant sacrificing quality and safety measures; lives sacrificed for “progress”.

There are also reports coming in from surviving passengers about the crew’s incompetence – passengers were repeatedly ordered by intercom to remain where they were, despite the 6,825-ton Sewol listing perilously and water filling the internal decks.

The ferry’s eleven crew have been arrested, including the ship’s captain, Lee Jun-seok, and all four of its lower-ranking navigation officers. They face various criminal charges, including negligence of duty, violation of maritime law and accidental homicide. The crew were among the first to flee the ship, while most of the passengers were trapped inside.

Prosecutors also seized another ferry owned by Chonghaejin Marine that had a design similar to the Sewol’s, to collect possible evidence of safety violations. Investigators say the life rafts in the other ferry do not function properly.

Prosecutors have indicated that investigators were expanding their inquiry into the ship’s owner, safety inspectors, regulators and Coast Guard radio dispatchers who were accused of not responding quickly enough to the ferry’s trouble.  A senior prosecution team is investigating into “malpractice in the entire shipping industry.”

Too little too late?

Blame is being dished out as it should. Hundreds of rightfully angry grieving parents are vocally stirring Korea’s national psyche.

Up to 100 distraught family members of the victims clashed with the police when they attempted to march to Seoul from Jindo island. A bereaved woman shouted: “Bring me the body so that I can see the face and hug my child.”

The issue is bigger than another ferry sinking for Korea, and it has had a few.  The scale of the Sewol Disaster has become Korea’s national disgrace.

In the wake of mounting public criticism of his government’s substandard response to the ferry disaster, (south) Korea’s prime minister, Chung Hong-won, has today resigned in shame.

An elderly convenience store owner in Seoul stated to the international media amongst the weeping parents:

“I am ashamed to be Korean!  How can we say we are a developed nation?” he asked. “Those sons of bitches in the government aren’t doing enough to help the families. Sons of bitches in the businesses are corrupt, making this happen, probably ignoring the regulations because it is cheaper.”

Editorial writers echoed this theme. The Kookmin Ilbo wrote that the disaster response was, “A typical underdeveloped-country style action … confusion, haste and a delayed rescue.” The Chosun Ilbo wrote, “Above all, the people must have felt deeply that Korea is a country that doesn’t value human lives.”

This Sewol Disaster lays bare cultural flaws in Korea’s national character.  A tragedy in 1912, but unforgivable in 2014.

Some Koreans say that rapid growth, which fostered a need to get things done faster and cheaper, made the country more prone to disasters decades ago, something of an embarrassment as it joined the ranks of developed nations in the 1990s.

But Korea, like so many emerging nations, only window dresses Western standards.

The Sewol Disaster is not a first for Koreans in recent times.  In 1995, the upscale Sampoong department store in Seoul collapsed, killing 500 people, the cause contributed to an obsession with rapid growth tolerating corruption and cutting corners.   In 1994, a major bridge over the Han River also collapsed, killing more than 30 people.  In 2013, Korea’s Asiana flight 214 from Seoul crash landed at San Francisco killing three and injuring 168 passengers.

All tragedies were generally attributed to poor governance, poor standards and poor enforcement.  Korea’s archaic culture bases senior appointments on seniority, as a reward for time served, not for ability or talent.   Korean culture encourages a sense of entitlement to the perks of office than responsibility.

Korea is obsessed with rapid economic growth at face value and at all costs to catch up to the West.  But human, social and environmental controls are ignored.  Safety, principles, and accountability are ignored, which simply means that Korea is cheating to compete with the West.

A week prior, Australia’s Prime Minister Tony Abbott had travelled to Korea to sign a free trade agreement with (south) Korea’s President Park Geun-hye.  The deal with Australia was described by Park Geun-hye as “substantive and mutually beneficial”. 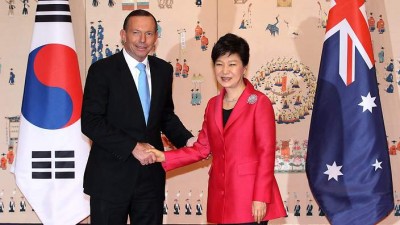 But Korea got more out of the FTA deal than did Australia.

Tony Abbott’s presumption that the FTA was made on the basis of their being a proverbial “level playing field” was a treacherous short selling and betrayal of Australia’s World Class Standards to Korea’s Third World sub-standards.

Korean cheating means that it should be disqualified from free trade agreements with the West, like Australia.    It is for Korea to raise its standards to World Class Australia’s.  It is not for Australia to lower its standards to a cheating Korea.

Australian exporters’ desire for a proverbial “level playing field” with Third World nations has come at the demise of Australian-based businesses producing for our own Australian home markets.

Liberal and Labor governments one after the other since as far back as Whitlam, have pushed the economic liberalist ideal of “free trade” as the key strategy to build Australian export revenues. The fundamental problem continues to be that our trade ministers are weak negotiators and for small gains in opening up export trade, they have allowed massive import dumping.   It is for this reason alone that Australian Manufacturing has become a shadow of its former 1960s self.

The Labor Party has secured free trade agreements with ASEAN nations Brunei, Myanmar, Cambodia, Indonesia, Laos, Malaysia, the Philippines, Singapore, Thailand and Vietnam, as well as with Chile, New Zealand, and the United States.  All but the last two pay Third World wages, and the average wages in New Zealand and the US are worse than in Australia.

On the export side of Trade Minister Andrew Robb’s deal with Japan, Australian beef producers got only marginal tariff reductions, while Australian rice growers, sugar cane growers, dairy industry apples, pears and honey didn’t even get a mention.

Australian production across the board is of World Class Standard, and our agricultural produce is prized for disease free quality, yet Australian politicians are weak at negotiating commensurate trade deals.  In free trade, Australians keep getting dudded by Labor and Liberals time after time.

Abbott’s proverbial “level playing field” is a con and a treacherous betrayal to Australian producers and workers. 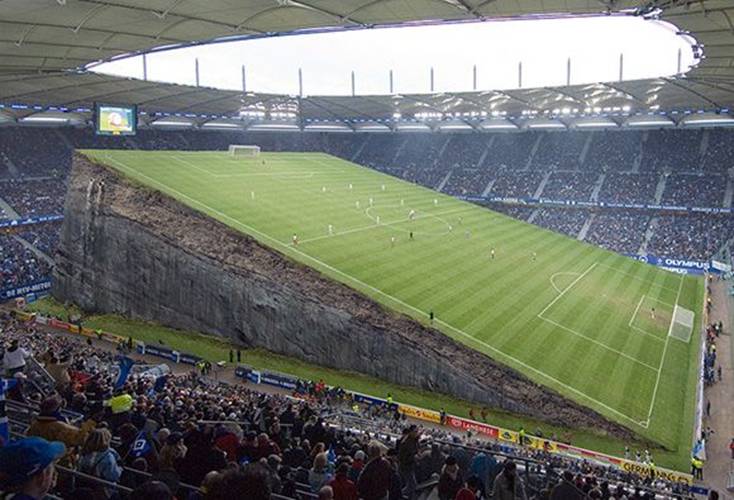 Yet, both the Labor Party and Liberal Party plan to tee up free trade agreements with the Gulf Cooperation Council  (Bahrain, Kuwait, Oman, Qatar, Saudi Arabia and the United Arab Emirates), and India, as well as with the United States’ secretive Trans-Pacific Partnership which threatens to allow multinationals to veto the rights of nations in trade deals.

Like Labor, the Liberals are blind to their free market ideology – cheaper consumer prices and choice means consumer economic growth, and more votes.  The Liberals throw their poorer cousin National puppets a few pittance to appease the noisiest lobbyists of the Bush.

In addition to Australian decent wages, few of Australia’s trading partners measure up to the standards of Australian industry in respect to quality, OHS, hard-fought workplace conditions, environmental and other regulatory controls.

No Australian would consider that a Sewol Disaster could happen with the Spirit of Australia.  Australian World Class Standards are so high that Australians can feel safe aboard, even in the infamously fierce seas that Bass Strait can unexpectedly dish up.

But for idealistic reasons, both the Labor Party and the Liberal Party blindly and happily hock Australian world class produce to Third World nations under dodgy free trade agreements as if Australian World-Class standards meant nothing. 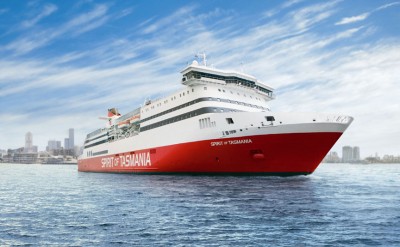 World Class Australian shipping is no comparison to shameful Korea.

Whereas the economically over-hyped “Asian Century” is shamefully just about exploiting emerging nations, the 21st Century should invite all to aspire to Australian proven World Class Standards.