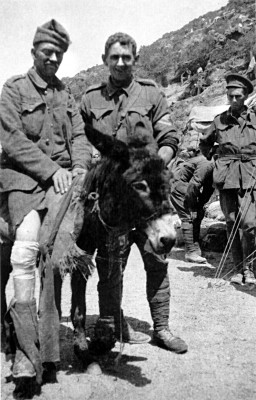 Simpson and his Donkey at Gallipoli, May 1915

Jack Simpson Kirkpatrick is well recognised as one of Australia’s most famous, and best-loved military heroes.

On the 25th April 1915 he, along with the rest of the Australian and New Zealand contingent landed at Gallipoli in Turkey – ordered by the British to land at the wrong beach on a piece of wild, impossible and savage terrain now known as Anzac Cove.

During the morning hours of April 26th , along with his fellows, Jack was carrying casualties back to the beach over his shoulder – it was then that he saw the donkey, an animal he had grown up with.

Jack used the donkey over twenty four days of fierce and deadly battle to rescue over 300 men down the notorious Monash Valley.  He did this selfless service under constant and ferocious attack from artillery, field guns and sniper fire, until he was fatally hit by enemy machine gun bullet in his back on 19th May 1915.

Australian Captain C. Longmore, in 1933, remembered how the soldiers “watched him spellbound from the trenches… it was one of the most inspiring sights of those early Gallipoli days.”

Australian Colonel John Monash an eye witness wrote “Private Simpson and his little beast earned the admiration of everyone at the upper end of the valley. They worked all day and night throughout the whole period since the landing, and the help rendered to the wounded was invaluable.

Unfortunately, the senior medical officer at Anzac, Colonel Howse VC, had given faulty instructions to the junior officer preparing Simpson’s citation.  Jack was recommended under the wrong category of heroism and consequently his VC request was denied.

In July 1967 Australian leaders tried to correct this tragic error by sending a petition to the British War Office, signed by Prime Minister Holt, the Governor General, the Chief of the General Staff, and other leaders on behalf of the Australian people, requesting that a posthumous Victoria Cross be awarded to Private John Simpson Kirkpartrick. The request was denied, on the grounds that it would be setting a dangerous precedent. This  was incorrect. The precedent had already been set. In 1907 two British officers, Lieutenants Melvill and Coghill were posthumously awarded the Victoria Cross for their actions in South Africa, twenty-eight years previously.

It is now 33 years since this petition was tendered by Australia’s leading citizens. The denial of the request by a handful of people in Whitehall, England was a disgracefull slight on Australia’s Political and Military leaders and of the people they represented.
It begs the question: ” Why is an award from another country more important than any honour we may bestow on our own heroes?”

Why have successive Australian Governments since 1991 chosen not to confer on Simpson his rightful honours with the Victoria Cross for Australia?

It would be a fitting honour, long overdue, for the currently visiting representative of the British Royal Family and heir to the British throne, Prince William Duke of Cambridge, to posthumously grant  Jack Simpson Kirkpatrick the Victoria Cross while he is respecting ANZACs at the Australian War Memorial tomorrow.