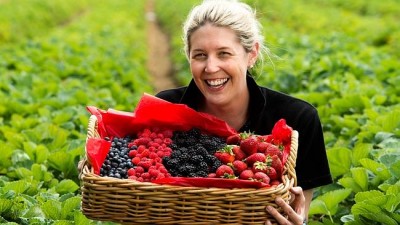 So far, thirteen Australians have now tested positive to hepatitis A after consuming the contaminated frozen berries from China. 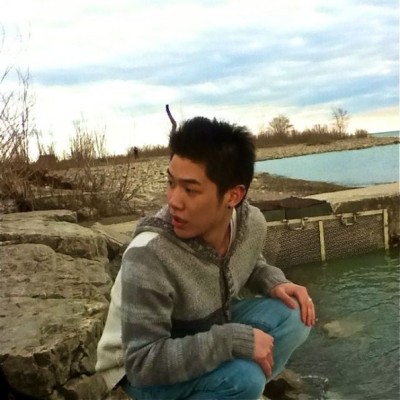 But only after Australian media publicity has the FSANZ authority published an Australia-wide product recall for two products, Nanna’s Mixed Berries and Nanna’s Raspberries due to potential hepatitis A contamination. Yet its recall is only for frozen berries and only for packets marked ‘Best Before 22/11/16’.

Whereas Patties Foods consumer recall is for: 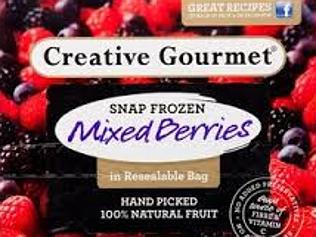 Woops, FSANZ missed recalling this product, despite confirmed by Patties Foods as from the same Chinese source

University of Melbourne’s Dr Andy Schmulow, senior research associate in its school of law, says the goods will have breached Australian consumer law if found not to be fit for human consumption.

FSANZ is reckless by allowing these same products having different use buy dates to 22/11/16 to be safely eaten by Australian consumers. All Nanna’s berry products still in existence need to be recalled.

FSANZ is also reckless by excluding any recall of related products out of Patties Foods processing plant, which have already been condemned by the company and reported in the Australian press:

FSANZ has recklessly ignored the fact that Patties Foods CEO Steven Chaur has previously stated to the Australian media: “The specific source supplied raspberries which were packed in Nanna’s and Creative Gourmet Mixed Berries, that were the subject of the consumer recall announced over the weekend.  The source also supplied product for Nanna’s Raspberries 1kg packs, with Best Before Dates up until 15/09/16.”

FSANZ has still not required any contamination testing at Patties Foods plant at Bairnsdale.

So FSANZ CEO Steve McCutcheon, why have these products not been subject to similar precautionary FSANZ recall? 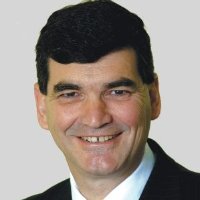 McCutcheon and his board need to be sacked for reckless incompetence. But seems the head of FSANZ has been asked to resign. His job has been advertised in The Australian newspaper last weekend on page 2. 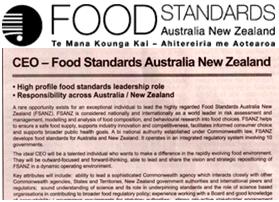 It’s not the first time Chinese shit has hit the fan downunder causing hepatitis A.

And FSANZ is trying to point the blame for the current Chinese poo berry scare back on to our Department of Agriculture.

All Australia’s Federal Department of Agriculture has done in the wake of the national food scare is to politely write to Chinese authorities demanding assurances that measures are in place to prevent further contamination of frozen berries. Typical hairy chested National’s Barnaby Joyce as Agriculture Minister says “As this issue has come to light, we have made sure that we’re on our front foot and trying to deal with it.”

Whereas independent senator Nick Xenophon is calling for an urgent independent review into Australia’s imported food safety regime and a Senate inquiry for MPs to test evidence in public hearings.

“This is a serious and widening outbreak of illness apparently caused by basic hygiene failures in China,” Senator Xenophon said.
“These berries were considered ‘low risk’ but failed the most basic of health checks – carrying a bacteria common in faecal matter.
“This shows systemic failures in the way that imported foods are screened in this country.” 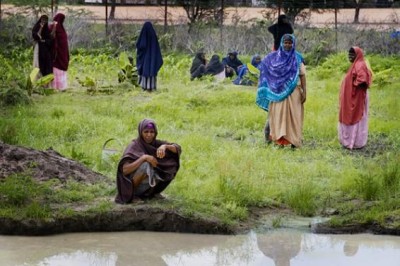 In August 2013, Australian author and science journalist Julian Cribb warned us, “When I started reporting in agricultural journalism there were 19,000 dairy farmers in Australia, today there are less than 3000 and they’re still leaving, so how many are we going to have left in 20 years time?”

He said this decline, combined with the supermarkets increasing reliance on imported foods, is making Australia’s food supply increasingly insecure.

“Between 1/4 and a 1/3 of our fresh fruits and vegetables are coming from overseas now and a lot of them are coming from China. It’s a crazy situation, the Chinese have got a food problem of their own but they’re exporting food to Australia.”

He argue this is not just problematic for Australians into the future, but right now, saying a lack of testing for chemicals on imported food products is putting people’s health at risk.

“You can walk into any supermarket around Australia and you’ll find a whole range of imported food, they haven’t been checked, you don’t know what’s in them. We know from American and European surveys that there are a lot of pesticides and various chemicals in the food, and not just from the food itself but also from the wrapping and things like that.” 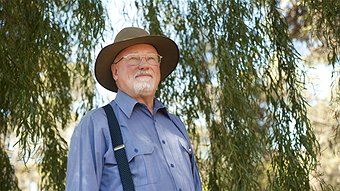 He says many supermarket foods are grown in countries where farmers are not as educated in safe agriculture practices, increasing the risk of food product contamination.

“If you grow it in these third world countries no-one is teaching the farmers how to use the chemicals properly, they’re not like our farmers who have been educated in these things.

“They are used badly, they are sloppy, they often overspray because they think more is better, there’s no inspections, there are no ag departments helping them to use chemicals wisely- so the stuff that’s coming in is a bit of a nightmare.” 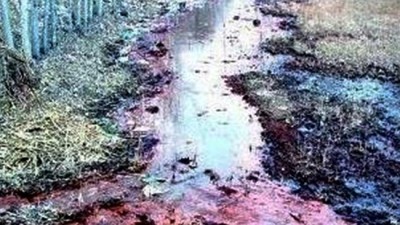 A river at Jinling in China’s Shandong province, where berries for Patties Foods are washed, runs purple with pollution.

He used fish as an example, saying that consumers are not aware they could be receiving toxins from this imported seafood.

“We import into Australia 85% of our fish which is ridiculous in a country with the world’s second largest ocean zone, and that fish is usually heavily contaminated with things like mercury, cadmium, heavy metals, because it’s grown with very very dirty water, in Asia usually.

“All the good quality Australian fish that gets sold overseas demands a nice fine price of course but our consumers are not getting it. We’re getting the b-grade stuff that’s heavily contaminated and nobody in government cares, the policy is to let people get cancer and then cure it.”

With Chinese Free Trade Australians will get more of the b-grade stuff dumped into our supermarkets.  We’ll only discover the health problems years down the track in the forms of cancers and liver and kidney failures.

The National Oceanic and Atmospheric Association in 2012 reported that eighty per cent of Australia’s retail seafood in Coles, Woolworths and IGA supermarkets is imported.  About half of those imports are raised on factory farms, called aquaculture.Asia is the number one producer of these aquaculture products, dominating 89 per cent of the industry, and most of our farmed fish imports come from there.

Tilapia fish in China’s fish farms, are fed pig and goose manure — even though it contains salmonella and makes the tilapia “more susceptible to disease.”

In Vietnam, farmed shrimp bound for the US market are kept fresh with heaps of ice made from tap water that teems with pathogenic bacteria.
Bloomberg also notes that at the same company “there’s trash on the floor, and flies crawl over baskets of processed shrimp stacked in an unchilled room.”

Like US meat farmers, Asia’s shrimp farmers rely heavily on antibiotics, many of which are banned for use in the United States.
According to a recent study by the centres for Disease Control and Prevention, a quarter of the food-borne illness outbreaks caused by imported food from 2005 to 2010 involved seafood — more than any other food commodity.

Residues of nitrofurans have been detected in south-east Asian shrimp, which is a known carcinogen.

In 2012, a Melbourne Age newspaper analysis of Australia’s ‘failed food’ results since 2010 shows 1050 imported foods, or one consignment a day, have not met Australian standards. Specifically, Australian medical experts have raised the alarm over a rising number of Asian fish imports containing banned antibiotics, like Enrofloxacin (Baytril) for animal use only. 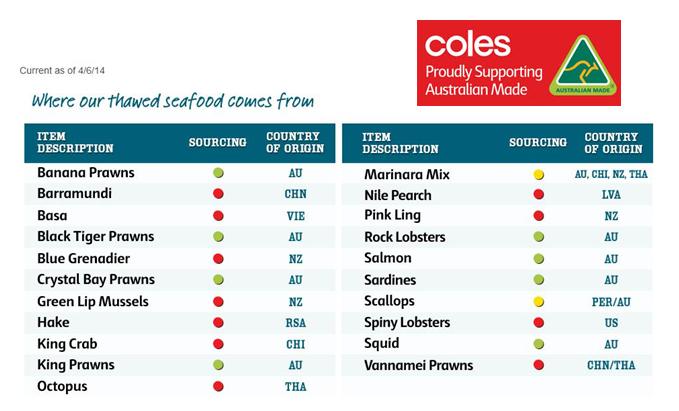 Coles gets much of its frozen seafood from the Third World – don’t risk it!

Australian farmers say they are confident that homegrown fruits are the best berries money can buy.  Owner of Sunny Ridge Strawberry Farm, Mick Gallace, said Australian grown produce was subject to strict rules. “You get a much fresher product which is grown with quality and is sold with a guarantee that you will not get sick,” he said.

PM Tony Abbott’s new China-Australia Free Trade Agreement (ChAFTA) announced in November 2014 is spruiked for Australian exporters. But ChAFTA also means that 95% of Chinese goods imported into Australia will be duty-free and free to compete on a Chinese level playing field with Australian farmers below cost in just four years time. 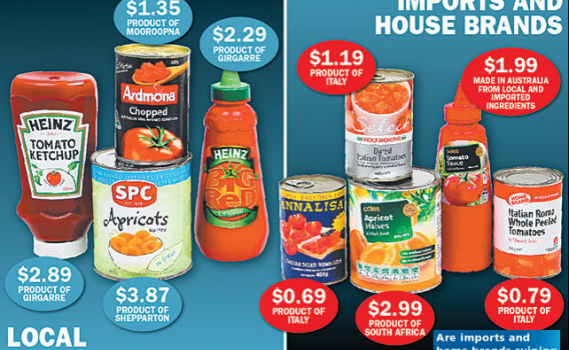