In the past week, eight Australians shopping at local supermarkets have contracted hepatitis A virus after eating Nanna’s frozen mixed berries secretly imported on the cheap from Third World China. So far Australia has three hepatitis A cases in Victoria, two in New South Wales, three in Queensland, and Australia’s Department of Health expects contamination numbers to increase.

Yet Australian shoppers are led to believe the fresh frozen berries are locally Australian. 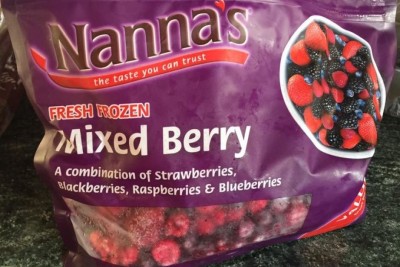 “The taste you can trust“? – contains cheap chinese shit (literally)

So bring on a civil class law suit!

Dr Finn Romanes, from the Victorian Health Department, said they were asking people who had eaten this product in the past 50 days to look out for symptoms of the disease.

Manufacturer, Patties Foods Limited, based in the Victorian town of Bairnsdale, chooses to snub local Australian farmers and instead import its berries from China and Chile as ingredients in its range of Nanna’s frozen mixed berries products.

Yet Patties Foods chooses to import berries for its frozen foods products from Third World China and Chile because they are cheaper.   Third World berries and fruit are cheaper for a reason – they don’t come close to meeting Australian First World horticultural standards. 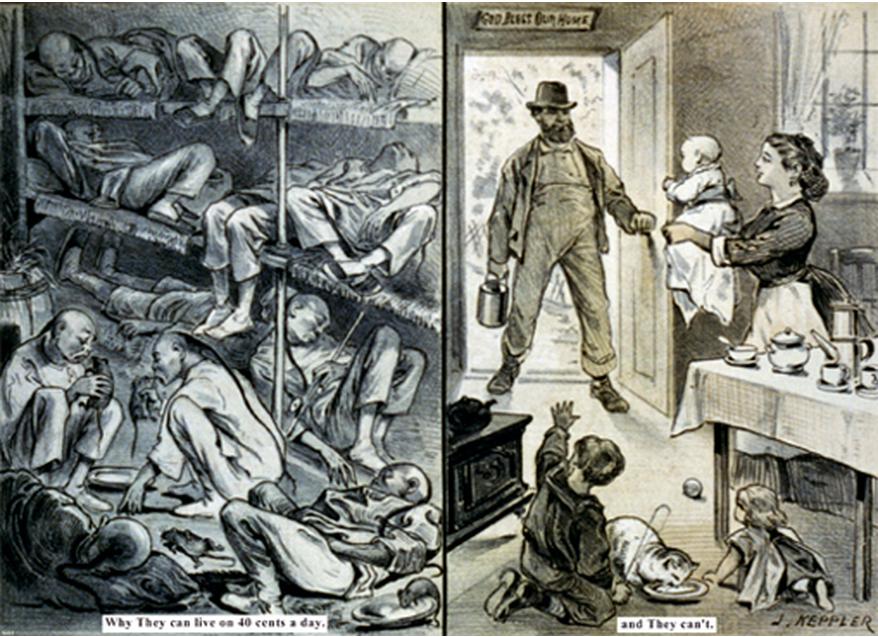 Yet Patties Foods misleadingly promotes itself as “the leading Australian-owned Branded Frozen Food Company.”  “We are proud of our reputation as the maker of some of Australia’s best loved products.”  “We therefore only use the best quality ingredients available.” “We will only deal with reputable suppliers who meet our strict quality standards.” 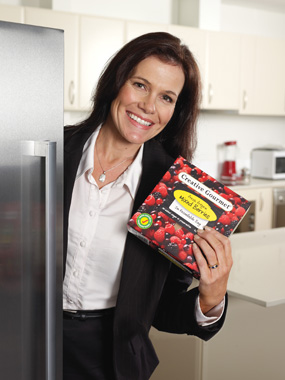 Dr Rosemary Lester, Victoria’s chief health officer, said frozen berries had been implicated in past outbreaks of hepatitis A.

“Hepatitis A virus infection is uncommon and normally associated with travel to countries affected by endemic hepatitis A,” she said. “The only common link between the cases is consumption of this product.”  (aka Nanna China).

“Symptoms typically begin with fever, loss of appetite and nausea, and can progress to jaundice, which is dark urine, yellowing of the eyes,” he said.  “In a very small number of cases there can be death associated with hepatitis A infection.

The Hepatitis A contamination of the berries is attributed to Chinese Third World farming and manufacturing conditions. Hepatitis A can only infect the berries when traces of human faecal matter containing the virus contaminate hands, objects, water or food.   China also uses sewage to fertilise its crops.  Yum!

Dr Vicky Sheppeard from NSW Health’s Communicable Diseases Branch said there were concerns because hepatitis A was contagious.

“So far we’ve had two people that have confirmed hepatitis A, that in the weeks to months before they developed hepatitis A had consumed these berries and they’re coming from different parts of the state, so we’re concerned this might be a more widespread problem,” said Dr Sheppeard. 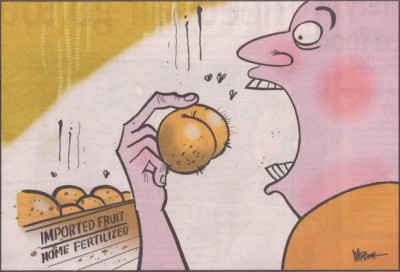 “The incubation period for hepatitis A is between two and seven weeks, so at this stage it’s an early stage of the investigation and we’re still gathering information about how much of the product is in NSW homes but potentially we will be seeing more cases in the coming weeks,” said Dr Sheppeard. 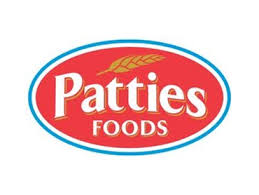 Once a family-owned company, Patties Foods Limited listed on the Australian Stock Exchange in 2006.  Since then, values and principles went out the door, and it has all been about corporate and shareholder return.

Profits have been down in recent years due to increased competition from Coles and Woolworths own home brands which use cheap foreign ingredients.  In 2013, Patties Foods which owns the well-known Australian brands of Herbert Adams, Four’n Twenty and Nanna’s, made a net profit of $9.1 million in the six months to December 31, down from $10.8 million in the previous corresponding period.

Even with new robotic packing equipment, Patties Foods, is finding it hard to compete on price with Woolworths and Coles cheap imported home brands.

Patties Foods CEO Steven Chaur has confirmed that the berries are packed in China before distribution in Australia.  “We have decided that all our frozen Mixed Berries should be recalled until such time as we receive the results of further laboratory tests. The recall is an important step to ensure public safety and confidence,” Mr Chaur said. 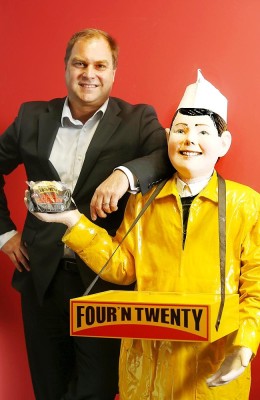 No Mr Chaur.  How can Australian consumers ever trust Nanna’s berries to not taste of chinese shit again?  Where does your meat come from that you put into Herbert Adams pies or Four’n Twenty pies these days?  Chinese horse meat?

Or is it Polish horse meat like that found in Tesco burgers a few years ago?  Tesco withdrew all products supplied by Silvercrest when a survey of beefburgers by the Food Safety Authority of Ireland (FSAI) showed 29% horse DNA relative to beef content in one of the samples.

Frozen food imports into Australia are not inspected for Food Safety.  Food Standards Australia New Zealand (FSANZ) is part of the Australian Government’s Health portfolio and is supposed to regulate food standards in both countries.  This includes country of origin labelling, ingredients labelling, the use of ingredients, processing aids, colourings, additives, vitamins and minerals.

But FSANZ allows foods to be labelled as a mix of local and imported ingredients, so it is meaningless to consumers.  FSANZ is as useless as tits on a bull just like the Foreign Investment Review Board.  Both bodies should be recalled, their boards sacked and decommissioned for being an irresponsible abuse of taxpayers’ money.

Instead, more trustworthy is AUSVEG, which is Australia’s leading horticultural body representing the interests of Australia’s 9,000 vegetable and potato growers.

AUSVEG Deputy CEO, Andrew White says, “Given that Australian producers are required to comply with some of the world’s strictest quality assurance standards before their products are made available for public consumption, it is high time the same level of scrutiny is applied to imported produce to ensure public safety.”

Free trade or no free trade; food from Third World China cannot be trusted.  Chinese fish is contaminated with river sewage. It is also common chinese practice to feed animal faeces to farm-raised Tilapia fish (ask the Americans), and to let livestock and poultry roam freely in fields and to spread livestock and poultry waste on fields or use it as fish feed.  Many of Third World China’s farms and food processors are situated in heavily industrialized regions where water, air and soil are contaminated by industrial and sewage effluents. 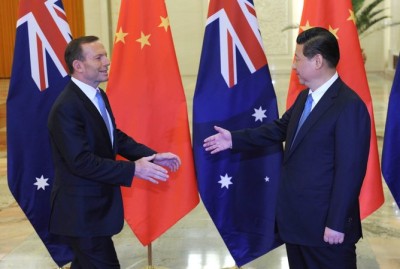 Third World Chinese manufacturers put cheap and toxic melamine in milk and infant formula to increase the apparent protein content. Melamine causes kidney failure and is universally banned in food production.  That didn’t stop chinese Shijiazhuang-based Sanlu Group and others contaminating 300,000 chinese in its milk powder in 2008.   As of July 2010, Chinese authorities were still reporting some seizures of melamine-contaminated dairy product in some provinces.  That is why in Sydney’s north shore, chinese immigrants clean out supermarkets of powdered milk – to post it home to their families in China.

Made in Australia? Or from local and imported ingredients?

SPC Ardmona has been forced to cut 61 fruit growers’ contracts, and was then denied provisional safeguard tariffs against cheap imported tomato and fruit products as part of the Productivity Commission’s accelerated report.  Food processor Simplot announced that two of its plants were under threat of closure due to a highly competitive industry and unsustainably high costs, and Gourmet Food Holdings, which owned iconic brand Rosella, was placed into receivership.

South Australia’s Spring Gully also entered voluntary administration earlier this year with debt of more than $3 million, only to be saved – largely – by a wave of local consumer support. 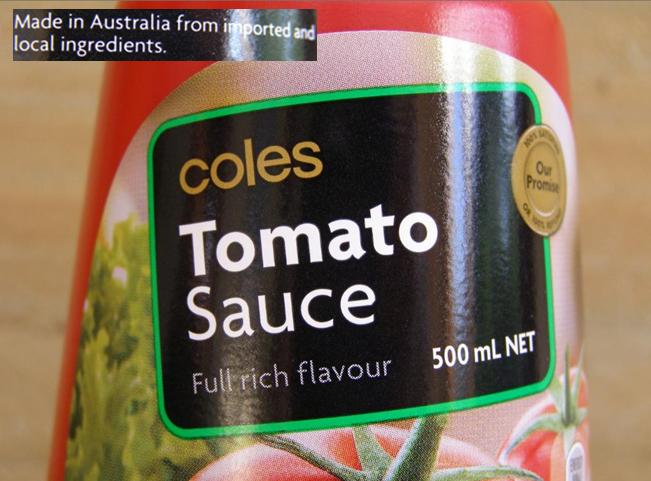 In practice, this means that manufacturers can get the word Australia on their goods, even if the ingredients are entirely from overseas and more than 50 per cent of production costs occur in other countries. 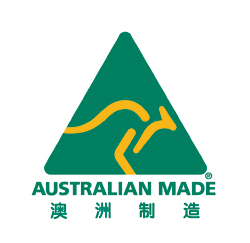 AUSVEG has long called for clearer Country of Origin Laws which provide consumers with the clarity they need to exercise their preference to purchase Australian produce, wherever possible.   Country of Origin Labelling must be mandatory for all foods imported into Australia.

AUSVEG Deputy CEO, Andrew White says, “By prohibiting confusing terms such as ‘made from local and imported ingredients’, this legislation will help to give Australian consumers the information they need to act on their proven preference to buy Australian.  By providing clarity around Country of Origin, we are not only giving consumers a choice, but also giving local growers a platform to compete against manipulatively-labelled, cheaper and inferior foreign product.”

“What this latest incident also clearly demonstrates is that it is in the public interest to provide consumers with clarity about where the produce they are buying comes from, so they can avoid products of dubious origins.”

When it comes to buying food in Australia, these are the only logos Australians can trust.