According Australian Conservative, Christian and Army veteran, Bernard Gaynor, Bendigo Bank has effectively converted to Islam. So perhaps we can expect its management to be off to Syria soon to raghead it with ISIL.  His following article appeared on http://bernardgaynor.com.au/ on Apr 5, 2014:

“The Bendigo Bank has staked its future on Islam. And that means it has turned its back on ordinary Australians.

Bendigo Bank hasn’t done this in any old way. It’s done it in the most brazen way possible, thumbing its nose at the citizens of the very town that gave birth to this company.

Of course, Bendigo Bank has hypocritically used new-age buzzwords to mask its totalitarian and anti-Australian intent: tolerance and inclusiveness. So it put out this statement yesterday:

“In response to recent questions and commentary regarding our decision to close an account.

This was a considered decision by our Bank, and we respect everyone’s right to voice their opinions.

Equally we have a right to ours, and we want to do business with organisations whose values align with our own.

Our Bank values tolerance and inclusiveness, qualities which are an important part of a strong community.

This is the only comment we will be making here on this matter.”

For those who don’t know, and in this particular case it is clear that this includes the Head-Honchos of Australia’s fifth largest bank, tolerance is defined as “The ability or willingness to tolerate the existence of opinions or behaviour that one dislikes or disagrees with.”  And inclusive, according to the Oxford Dictionary online, has the following meaning: “Not excluding any section of society or any party involved in something.”

Bendigo Bank obviously has other ideas about what these words mean. It thinks that being tolerant and inclusive is to operate an account for a group that want to build a mosque in Bendigo, while closing down an account for another group that opposes this idea. 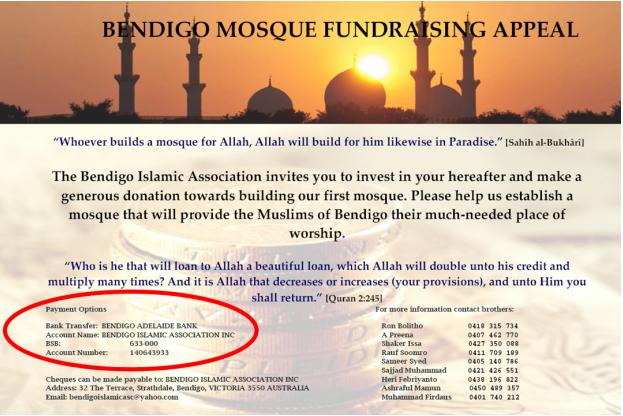 Quite simply, Bendigo Bank is doing ‘tolerance’ and ‘inclusiveness’ wrong.

And if truth in advertising laws had any power, Bendigo Bank would be banned from using those words in any statements, except to confirm to Australians that it was an organisation that shunned the ideas of tolerance and inclusion.

Bendigo Bank’s decision to support Islam over the rights of concerned local citizens to protest against its establishment in Bendigo also highlights the values of this company.

By definition, anyone who supports Islam supports a religion founded by a man who had sexual relations with a child, engaged in brutal atrocities against Jews and Christians, stated that the testimony of women is worth half that of men and who resorted to warfare to impose his will on unbelievers. By extension, they are now the values of Bendigo Bank.

And if you think that because all this happened 1500 years ago, it no longer matters, then you are wrong. More modern Islamic scholars controlling entire Islamic nations have stated that it’s hunky-dory to have sex with animals, provided you clean up afterwards. Of course, there are downsides. The animal must be slaughtered afterwards and its milk becomes unclean. Hey, don’t say Islam doesn’t have standards or values! And if you find that a little unappealing, you probably should not read what the Ayatollah Khomeini had to say about infants and sexual intercourse.

That’s the bed that Bendigo Bank has climbed into.  In doing so, it’s also decided that it can no longer deal with those who may disagree with these notions. That would be the non-Islamic majority, who are now being forced by organisations like Bendigo Bank to become second-class citizens.

It should make all Australians very concerned.

The easy refrain that Sharia Law will never be implemented rings hollow when the Islamic population of around only 2% already has the power to pressure banks to shut down the financial operations of those who oppose them.

That pretty much is Sharia Law.

And, like any law, it also comes with police. Now we know who they are: Bendigo Bank.”