PART 8:  He returned to New Zealand without anyone at immigration curious

Tarrant returned to New Zealand without anyone at immigration curious as to his travel schedule, which just happened to include countries with serious red-flags attached to them in the age of ‘the war on terror’.  He bought military-grade weapons without anyone having a clue how and nobody at his rifle club getting close enough to inquire about where he picked up his AR-15. He was posting “since 2016” on ‘extremist’ websites clearly being monitored by the spook brigade and Antifa but registering with no-one except Lads Society leader Tom Sewell who regularly chats to VicPol and just made a deal with ASIO.

He posted pics of his guns on Twitter days before a massacre. 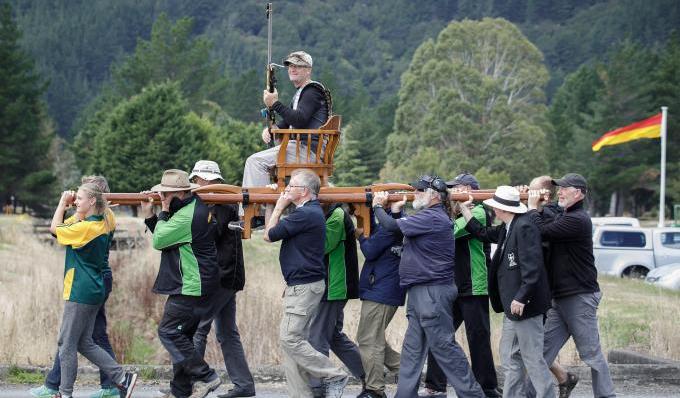 He spent six minutes shooting up a mosque without a visible drop of blood being spilt in a video he was live streaming to Facebook  (Ed: We are not disputing the killings happened, just commenting that there was no visible blood or gore).

The only respondents out of the entire Christchurch Police were two cops busy at an armed training session at nearby Princess Margaret Hospital and who were on their way to see “if” he might be attacking Al Noor, despite the fact terrified Moslems from that mosque must have been frantically calling 111 well before Tarrant had time to drive to Linwood picking off subcontinental pedestrians along the way. They managed to catch him via his number plate which apparently no other police pursuit vehicle, if there were any, was able to, (Tarrant didn’t attempt to disguise it anyway); nor was anyone attentive to the fact the passenger window was blown out on the left side of the rental car. 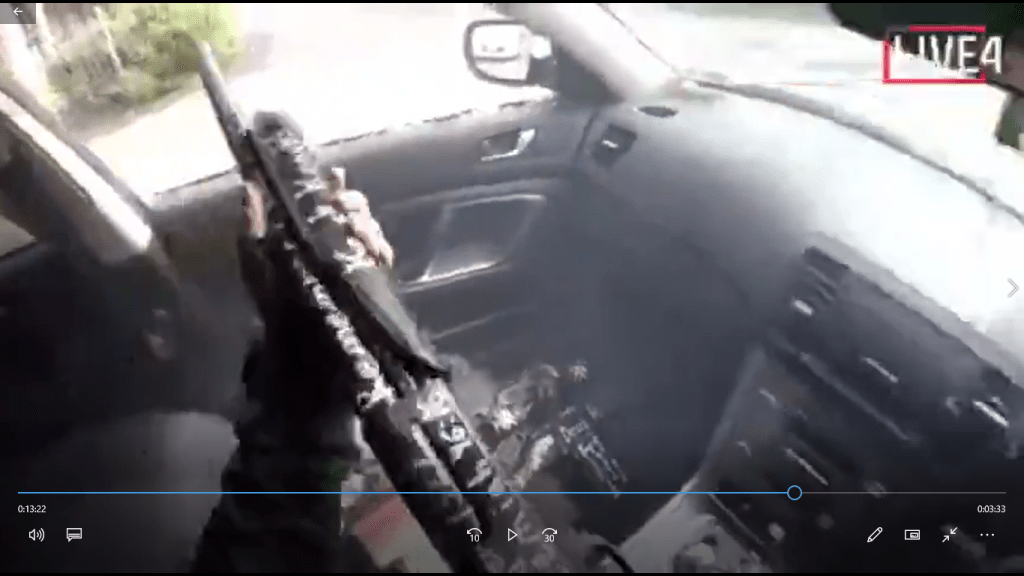 The two unnamed officers who have had messages of congratulations from around the world are already on leave with one overseas; dutybound no doubt to maintain silence surrounding the case (which means they can’t answer any questions straightforward or otherwise).

We’ve checked the vicinity of the area where all the events occurred and there is nothing to dispute the (now) official version in terms of timeline or police capture.  Via Google Maps we located the position on Brougham Street where they rammed Tarrant’s vehicle and it is situated on a logical interception course from Princess Margaret Hospital. Yet, that doesn’t explain why they seemed to be the only cops on his case, nor any of the other more mysterious aspects of the shooter’s background raised; they just account for the fact that he had the opportunity to be physically present at the crime scenes he is alleged to have been. That is about all our research corroborates. 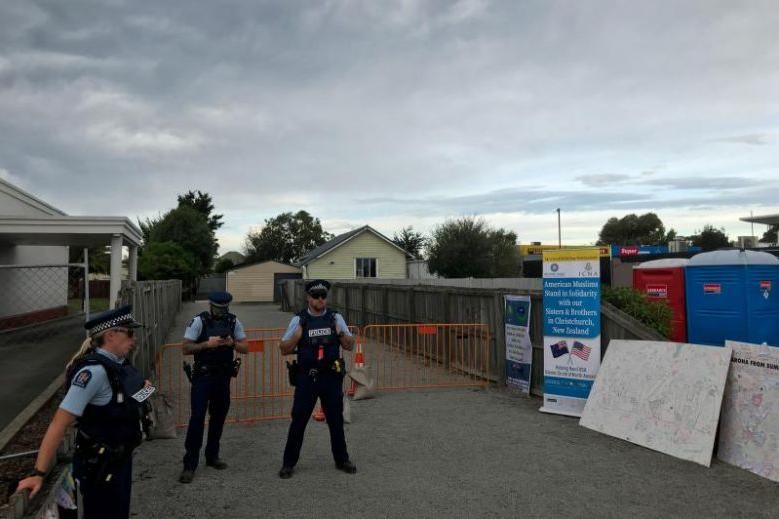 But before the day’s events, it’s as if Tarrant had everything but a gigantic neon finger pointing at him with big letters spelling out “Yoo-hoo, mad shooter standing right here!”

According to the mainstream media, Tarrant published his manifesto on social media pages including Twitter hours before carrying out the attacks. Supposedly minutes before he set off on his spree (which is when he was sitting in his silver Subaru hatchback hire-car in the carpark of Schindler Lifts at an industrial estate at Riccarton), he emailed his manifesto to NZ Prime Minister Jacinda Arden and “70 others”.

According to the official version of events among those who received the message were National leader Simon Bridges and Parliament Speaker Trevor Mallard. Media organisations both in NZ and international are also alleged to have been recipients of Tarrant’s 74-page statement.

No security was ordered around the mosques he stated in his manifesto, nor checks done on credit cards in his name to establish where he hired the car, its license plate, and possible Sat Nav pinpointing of either his car or mobile. As there was no mention of a laptop seized among the items in his possession so we’re guessing that he uploaded his manifesto via his phone.

This was a man who wanted to be caught. He did everything he could to ensure that he was apprehended for his crimes, which was the very central intention of his mission. But the lethargic way security services responded he could well have had time to fly back to Grafton for one last cuppa with his gran before they worked it all out.

Tarrant wouldn’t have let that happen, though, he’d have driven himself to the nearest cop shop the minute he ran out of bullets and Moslems to shoot at. It’s like all along he was programmed for a mission in the chilling echoes of the classic paranoid conspiracy film that we’ve already mentioned in this text, The Parallax View, (Paramount, 1974).

Jihadis either blow themselves up or get away. The IRA didn’t make senseless martyrs of themselves. This idea of becoming a victim for a cause suggests narcissism more than heroism. Tarrant wanted to get caught because he wants the ‘fame’ and he has chosen ‘defence of the White race’ as his justification. Again, it’s not the Moslems who brought themselves here, it’s a system that was created to encourage their migration when it isn’t filling immigration quotas.

His manifesto, largely wrong from one page to the next, fails to entertain the reality of the very history he claims to base it on. Historically, and using as an example the English and not the Dutch, Spanish or whatever, a very small island with a comparatively minimal number of White inhabits managed to dominate much of the world, without any regards to birth-rates. We agree with sections of his screed, such as population replacement, but then we would have to because he’s lifted our (White nationalist) ideas.

However, we don’t necessarily (at UNA) blame birth-rates, which among White people are rational in an environmentally and economically sustainable sense. It’s just that successive governments subservient to a world order continually pour in more and more non-Whites, either for the profit of the few or because there is a distinct program in place to dilute the hereditary racial content of those lands. After all, common Romans went hungry because the wealthy traded in slaves and left them without work, and it was “individuals” such as Julius Caesar that were necked by grumbling oligarchs partly because he intervened on behalf of the common people.

Indeed, Tarrant makes much of condemning individualism without considering the great individuals who shaped White history, and often for personal gain, Christopher Columbus is just one off the top of our writer’s head. Does he really believe that the rugged individualists in the Americas didn’t set aside their “pursuit of happiness” and take up muskets against the British in a ‘collective interest’ (Ironically, the tune he played ‘going into battle’, The British Grenadiers, was the marching music of the British trying to subjugate the Americans in the war of independence)?

Yes, indeed, individuals can come together when the call is great, so we find that derivative nonsense. Moreover, the treatment of poor children in Victorian London was so callous that great writers such as Charles Dickens were compelled to take up their cause. In a so-called golden age of empire, there wasn’t much worry happening about White birth-rates, at least not in the grand sense; lone voices doubtless cried out in the wilderness.

Those like Tarrant are living out of time and space in some half-wit myth about a White utopia that never was. Does he even understand that throughout history there was no bonhomie among our people just because we shared the same skin colour and culture? There was a very different ‘culture’ for the serfs who lived under the yoke of the landowner, and the tyrannical rulers whose royal nests were feathered by the taxes of starving peasants. Our goal is to honour that ‘vision’ of a White Working Man’s Paradise, envisaged by men like Percy Stephensen, William Lane, and William Guthrie Spence. 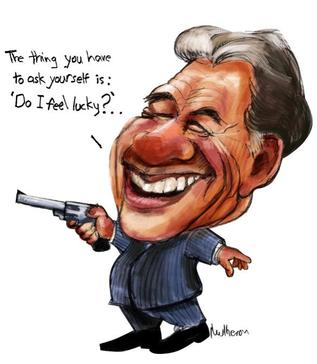 NZ Winston Peters (Queen-maker of communist Ardern) back on Jun 14 in 2016 in NZ Parliament:

“We in New Zealand First are opposed to religious extremism in any form, and this atrocity resulted from Islamic extremism by a terrorist whose family had sought shelter in the United States. There are those who will take the politically correct view and blame it all on a lack of gun control. They are wrong. They have been misled. They are seeking to divert blame from where it should lie because this terrorist could have used any weapon of destruction—a bomb, an improvised device, a method of mass poisoning—and blaming a lack of gun control in this way is seen, in our view, as simply a cop-out.”