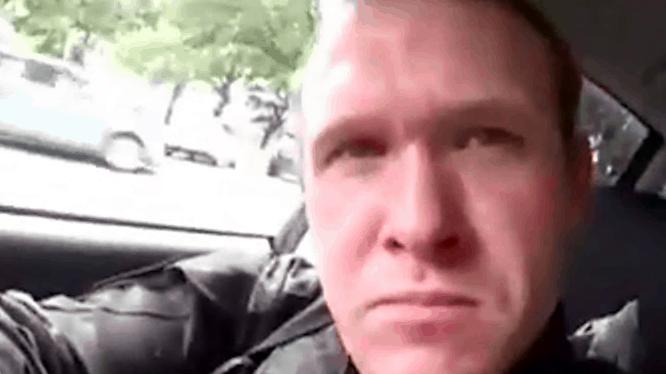 ‘Tarrant is already seated inside his rented silver Subaru Impreza hatchback when the video starts. We know it’s a rental because a yellow pine-tree freshener is dangling from his rear-vision mirror. Thanks to the feminine voice of his Sat Nav relaying audio directions, we were able to trace his exact route via Google Maps, from where he was parked, to the path he took to Al Noor mosque.

Firstly, we note the irony that he begins his journey in the carpark of Schindler Lifts (given the not-so-oblique reference to Schindler’s List; ThyssenKrupp weaponised the Nazi Second and Third Reichs) situated in the horseshoe shape industrial estate which is Leslie Hills Drive, in Riccarton. We shan’t harp on the Schindler thing, however, suffice to say there is no connection between Oskar Schindler and the lift company. Yet, why did he begin his journey from there?  What’s with starting at Schindler, there was more than just a wisp of a chance a passer-by might’ve spotted him and become suspicious? 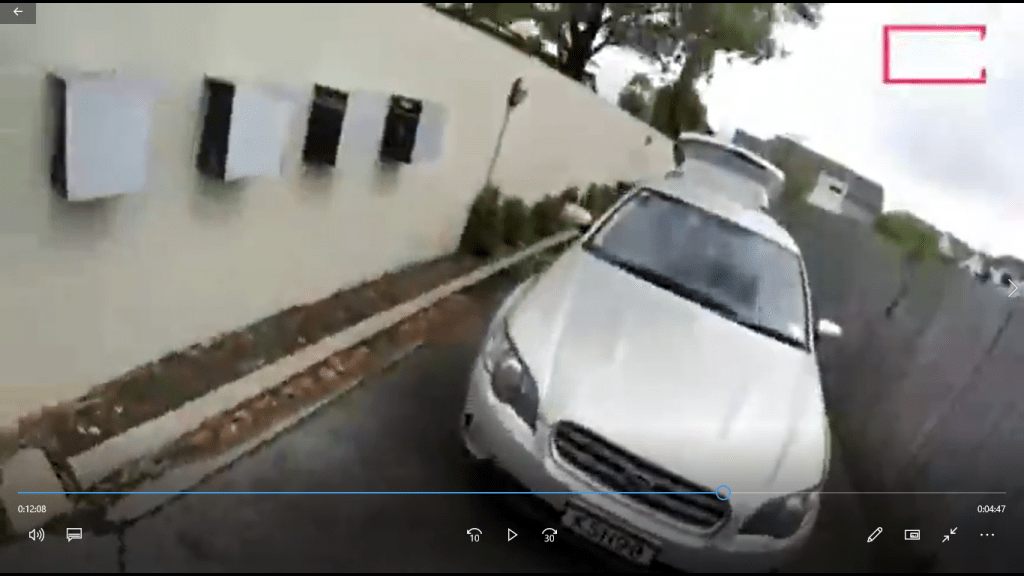 Industrial estates are busy places at that time on a given weekday and men dressed in paramilitary armour stencilled with right-wing slogans and a GoPro are more than likely to stand out from your yellow-vest and clerical types; especially when driving a geeky hire car and not an armour-plated vehicle.

These are all difficult questions but what we are really wondering is why when in his manifesto on page 12 Tarrant claims to have visited “the mosques in Christchurch and Linwood”, and having made much of his training, he needed a satellite guidance system to travel the short distance from Leslie Hills Drive to Deans Ave where the mosque is located? 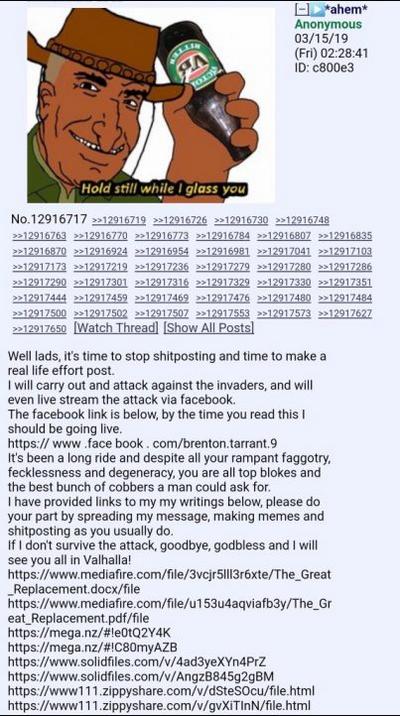 It’s worth noting just as a marker that in the video stationed beside a grey-painted industrial block building a yellow dumpster is visible in the carpark. That skip bin is present when you Google ‘Leslie Hills Drive, Schindler Lifts’, as you can see from the screengrab we’ve provided.

Firstly, however, before embarking on the ride, Brenton jocularly tells his incel viewers “Let’s get this party started.”  He then spritely says, “Remember, lads, subscribe to PewDiePie”. 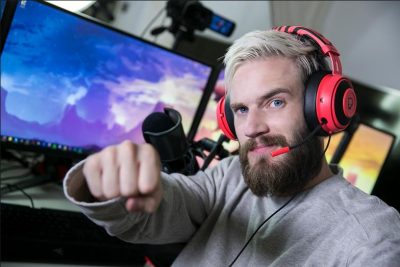 Other utterances are made during the course of the journey, but not all of them are distinguishable to our ears; partly because of the battle tunes he’s playing presumably on a Bluetooth device, and partly as his voice is too low to understand what is being said.

In respect to those recordings, the first is identified as a song “that was written to celebrate Serbia’s war against Bosnia and the ethnic cleansing of Muslims from the Balkans”.

Next up, is the marching tune British Grenadiers, which he plays all the way to the entrance of the mosque when he begins popping shells. Our writer must admit, he is partial to this last particular military tune himself, although if he was going on a shooting rampage, he’d more likely play either Engelbert Humperdinck or some vintage Wiggles.

Having started the car, Tarrant begins his route turning right from the carpark into Leslie Hills Drive, left onto Mandeville Rd, then some ways further on he made another left at Blenheim Rd. Rolling left onto Deans Ave, he stops short of the Al Noor mosque where the audio briefly cuts out as he takes off his helmet and lays it aside on the front passenger seat next to the three rifles. Whatever he mouths to the camera is inaudible. It isn’t clear why he halts the car or why he de-helmets, but moments later he places his armoured-lid back on his bean and continues the short run to the mosque, with that Serbian folk ditty still jigging along jauntily on the soundtrack.

Whatever he tells the viewers as he puts his foot to the pedal is indistinct but that Serbian tune is sure getting irritating right about now especially if, like our writer, you’re wearing headphones with the volume raised to try and catch whatever he says over the audio.

We still don’t know what he’s telling the viewers as he turns left into the carpark entrance to the right of the mosque, but the British Grenadiers has begun playing, and unsuspecting pedestrians pass by. More questions occur to us like how come the Serbian number and British Grenadiers and not True Blue and Jimmy Barnes, but we dismiss this line of inquiry as perhaps silly and in poor taste under the circumstances.

Anyway, the moment is nearing where all humour must be put on hold because what follows is only funny if you’re psychopathic or simply hate Moslems that much.  Notably, Tarrant’s hardware and outwear has been decorated and inscribed with various symbols, insignia, and names of heroes and martyrs pertaining to one setting out on a White-race-based crusade. His vest has been adorned with a white stencil of the black sun wheel which links to esoteric Aryanism. Taken together with his ‘manifesto’ so far Tarrant is just a hodgepodge of pseudo-White Nationalism, something that bears taking into account when adducing the disparate elements of this story.

Not in his manifesto, or elsewhere, does he give any indication — with the exception of Oswald Mosley — that he’s been influenced by serious nationalists; only the fruitcakes, extremists, and most bizarre of all his entire admiration is dedicated to a black female neoconservative named Candace Owens (an American conservative commentator and pro-Trump political activist) whose pro-Semitism conflicts with much of the symbolism Tarrant has adopted although in his manifesto he denies hating Jews. Irrespective, she is “the person who had the greatest influence on me.” 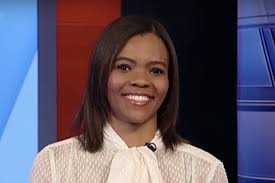 Consider, too, that Tarrant in his manifesto ‘The Great Replacement‘ writes that “Conservatism is dead. Thank God. Now let us bury it and move on to something of worth (Tarrant 2019, pp. 24-24)”.

Well, bucko, you do realise that the person that had ‘the greatest influence’ on you is a conservative?!  What’s more, he gets the dictionary definition of conservatism confused the political ideas.

Most bizarrely, despite indicating elsewhere in his writings that it poses a military threat, he professes that “the nation with the closest political and social values to my own is China (Tarrant 2019, p. 16)”. This is as he describes himself as both a “fascist” and an “ethno-nationalist”. Well, is he aware that China is busily occupying Australia in the very manner that his loathed Moslems are only whereas they pose no real threat the Chinese are the greatest problem we must tackle if ever we’re to be truly independent and allowed to explore our identity as a unique people among the diversity of White peoples that he lumps together as “Europeans”? Frankly, you can also add the USA to that list.

Quite telling is how, in his missing years of Oswaldesque travels around the globe, funded by an unlikely fortune sprung from a “bitcoin” deal that he made despite being a school dropout, he admits to shifting phases of ideological identities like a normal person changes their underwear. He writes, “I was a communist, then an anarchist and finally a libertarian before becoming an eco-nationalist.”

Yet, as White Nationalists are demonised in the fallout of this oddest affair none of those other identities will be singled-out for villainizing.

He writes, “Australia, just like the rest of the colonies of Europe, is simply an offshoot of the European people.” He’ll find a fierce argument about that if he is ever allowed to correspond with Australian nationalists once his thousand-year sentence is handed down. Moreover, he sarcastically dismisses his own kin as “drunken Europeans”.

Nothing he did was in the name of Australia, or Australian nationalism, but on the face of it for this pan-global White movement, born in America, which is a type of globalism in its own right.  We even doubt he did it for that cause, but more likely because he’s a born loser who has been conditioned like the rest of the western world to feel an entitlement to fifteen minutes of fame.

Add to that the incalculable damage that was done to his empathic conditioning courtesy of gaming addiction and you have all the ingredients of a real live Duke Nukem that fire actual bullets. In truth, this guy has more in common with the Columbine shooters than he does Anders Breivik.

Perhaps if he was an articulate nationalist who hit a proper target then we wouldn’t be so revolted, yet this isn’t the man, and these aren’t the targets, and we’re not about to get raided by the goon squad for giving him the thumbs-up on social media even if we aren’t especially fond of Moslems who, let’s face it, criticise Israel for invading Palestine but flood arrogantly into our lands in the same manner. 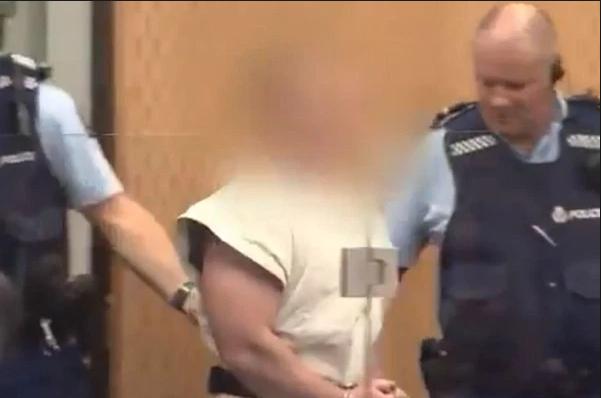 Professionally trained by whom?