Some media and political pundits think there is a chance Pauline Hanson will get into the Senate from Queensland.

We are a bit more skeptical about that. However, whatever the case, no nationalist will raise a hand for Pauline Hanson. 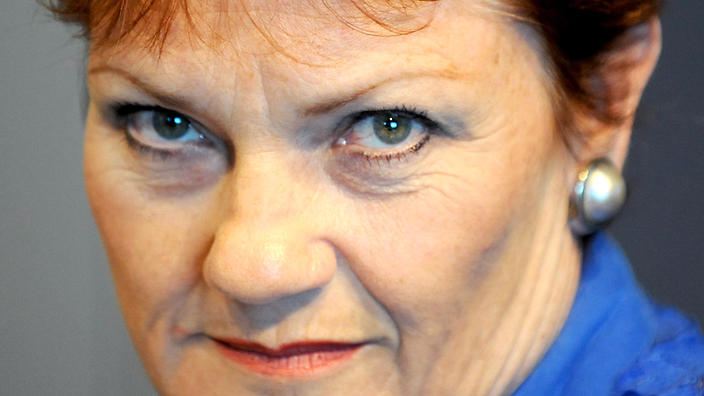 Many of us knew her in the days of One Nation. These members of One Nation suffered betrayal and organizational abuse of trust and misuse of their finance!

Even more so, all of our members who were previously with One Nation and those who were already in the nationalist ranks have serious issues with the Pauline Hanson’s One Nation party.

Just over a week ago, a person in Adelaide had a ‘friendly’ chat with Pauline Hanson. He recorded the discussion and passed it to us – and we publish it without any comment.

“When I first heard Pauline would be campaigning in Adelaide at a shopping centre nearby me, I thought it a good opportunity to ask her some tough questions.

When I first approached Ms Hanson, I shook her hand and straight-of-the-bat told her that I’d been on her One Nation website and noted that her policy on multiculturalism — stating ‘this is not about race’ and that ‘assimilation is key’ — is an affront to the foundations of Nationalism.

She began talking about how Australia was always diverse society, that -“Australia was made up of Yugoslavians, Ukrainians” and so forth.

And that assimilation is the key to preserve our culture etc, (or words to that effect.) She said, “Australia has always been multiracial, it’s multiculturalism that is the problem for us. After the second World War, many Greeks and Italians came here and assimilated just fine.”

“That’s because they’re European, the same race.” I interjected.

“Multiracialism is bringing about the genocide of White Australians, a genocide by replacement. And assimilation is the equivalent of looking the other way & pretending it’s not happening.”

“I don’t know what you mean?”,she replied.

“What I mean is that, if everyone assimilates and becomes ‘like us’ and we all get along… Our genocide simply carries on unnoticed and we just DIE quietly…”

She gave me a confused look.

Abbott imprisoned me, but his Liberals still derive my spreading of message

[I think she bloody well KNEW what it meant!]

“Right now, our birth-rate is below replacement level, while these foreign races keep pouring in & they’re breeding like crazy.

They’re breeding us out. We’re being replaced,” I answered.

“Well, now you’re talking about Islam, and Islam is not a race, it is a religion…”

“What do you want then?”

“I just want my race to SURVIVE… To live on.” I replied.

“The media made me appear that way,” she interrupted.

“Well, it seemed as though you were on board with ‘Ethnic’ Nationalism back then. But now it appears you’ve capitulated.”

“I was NEVER that way. The media framed me that way,” she said. “These have ALWAYS been my positions.” (referring to her current positions)

At this point she excused herself by saying “I’ve gotta talk to other people.”

We publish this as a report: