Nick Folkes Party For Freedom (PFF) has come under scrutiny lately for harassing phone calls mainly directed at a number of women who had previously been members or who had worked with them. Police complaints were made. In one case, the calls exceeded all boundaries of obscenity.

Yet, it just gets worse for the PFF to the point where we can say that Party For Freedom means ‘the freedom to party’.

Into our possession came a meme featuring a photo of a number of PFF members reclining upon a bed while one shows his posterior. 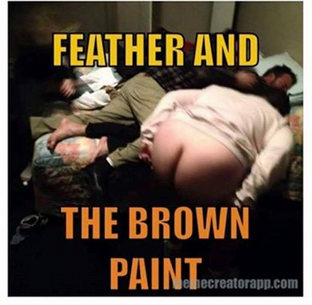 The ample buttocks are the possession of Toby Cook. Leader, Nick Folkes, can be seen.

We understand this meme was published on a secret chat room site of PFF. Reasonably, it implies that members are to be exposed (pardon the pun) to obscenity also.

Why would anyone serious about being involved in the patriotic struggle wish to deal with PFF?

WHY THE ITALIAN STATE WANTS TO BAN FORZA NUOVA