For instance, many Ordinary Australians perceive Islam and Sharia Law to be offensive to Australia’s decent civilized values.  Most intensely disapprove of (i.e. hate) the Islamic behaviours and practices that Sharia Law prescribes in the Quran as written in the Dark Ages to 632 AD – This includes the condoning of pedophilia, forced marriage, polygamy, halal and female genital mutilation.  Stating such disapproval is free speech, which may be perceived by Islamists as hate speech.  But if censorship prohibits public criticism, then the cultural values of foreign social deviants are being allowed to run counter to Australia’s mainstream societal values without challenge.  It becomes a slippery slope.

Citizens of any nation have a right to defend their rights against invaders.  It’s termed an ‘inalienable right to self-determination‘.

Without free speech and the freedom to express disapproval (criticism of a behaviour or practice), authoritarian censorship prevails, as enforced in totalitarian states like China, North Korea, Saudi Arabia, Myanmar, Turkmenistan, Eritrea, Uzbekistan.  The commonality of these nations?  Backward cultures anathema to Australia’s open First World society, and state imprisonment of political opponents of whom the state disapproves. 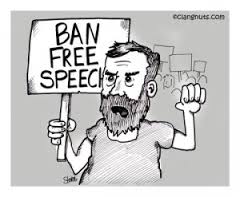 Disturbingly, censorship of free speech is playing out in Islamified Turkey by its Muslim President Erdoğan who has imprisoned hundreds of his political opponents, journalists, university rectors, military officers, and aid workers – all on trumped-up charges and fabricated evidence.for daring to express their disapproval of his government.

“The implied freedom acts to restrict the powers of the executive and legislature and is not a personal right granted to individuals. It includes not only speech, but also non-verbal communication regarding political and government matters, and its application is not confined to election periods.”   – Leanne Griffiths, James Cook University, 2005.

Such local and legitimate reassurances are a tad more contemporary and relevant than some foreign barbaric scripture written in a desert cave in 632 AD.  However, Australia is at risk of becoming increasingly Islamified by a thousand cuts under the euphemism of ‘multiculturalism’ and its creeping anti-discrimination legislation, state by state. Multiculturalism pragmatically is discriminatingly transferring mainstream rights steadily over to minorities and newcomers – many of whom hold decidely anti-Australian cultural values.

This is dangerous for mainstream Australians, who are beginning to recognise that their presumed and entitled democratic rights are being undermined.  All it takes is censorship legislation to undermine free speech to join the totalitarian backward states.

Consider censorship legislation in Australia.  Labor’s PM Gough Whitlam’s totalitarian Racial Discrimination Act 1975 Section 18C prohibits and criminalises any behaviour in the public domain that another perceives to be offensive, insulting, humiliating or intimidating that is claimed on the basis of race, colour or national or ethnic origin.

Penalties range between 6 months and two years imprisonment and or a fine of $5000, plus considerable legal representation, court costs and months of delayed process.

No White Australian has ever been successful in bringing a case against a non-White relying upon the Racial Discrimination Act 1975 through the Australian Human Rights Commission.

Both are prejudiced against White Australians.

Consider the state of Victoria in Australia.  Under the Racial and Religious Tolerance Act 2001.  Under Section 25, prohibits and criminalises any conduct (in public or in private) that intentionally incites hatred and threatens physical harm towards another on the ground of the religious belief.  Penalty is 6 months imprisonment or a $6000 fine.

Threatening physical harm is a separate matter already dealt with in Victorian under the Crimes Act 1958, Section 21 ‘Threats to inflict serious injury’ in which it is a serious criminal offence for a person to make a threat to inflict serious injury on another (intending that another fears would be carried out).  Penalty is 5 years maximum imprisonment. 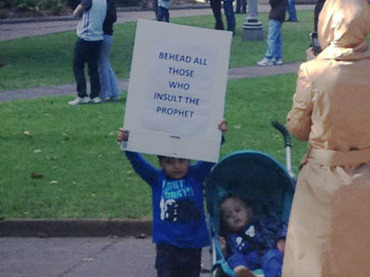 This makes the Racial and Religious Tolerance Act 2001, Section 25 in relation to threatening physical harm, redundant by duplication.

But inciting hatred is subjective, remembering that hatred is a perception of intense disapproval.

Three Australian patriots have been charged by the Victorian police for participating in a non-violent political demonstration.

Members of the United Patriots Front carried out some ‘street theatre’ in which they mocked those Islamic extremists who cut the heads off their enemies; they used a fake knife to cut the fake head off a fake dummy, with fake red blood (food dye) spurting out.  It was early Sunday morning, the council chambers and the shops were closed, and no-one else was present at the time. 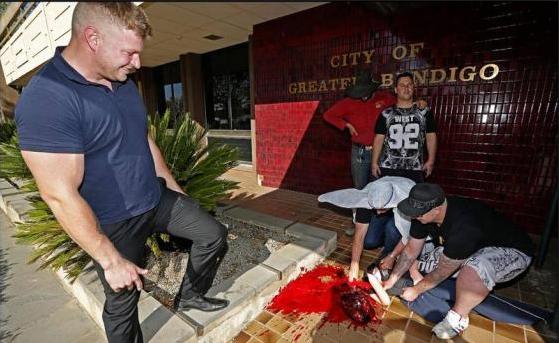 In a video on Facebook, Blair Cottrell (leader of the United Patriots Front) stated that:

“I made a statement before two of my colleagues, with plastic knives, beheaded a dummy made out of pillows. The act was intended to be a political statement against a mosque development in the local area, Islamic immigration, and that particular Islamic practice.”

It was a political demonstration in which some patriotic Australians publicly showed their opinion of Islam, an opinion which they are perfectly entitled to hold and express in a democratic society.

In the aforementioned Facebook video, a Victoria Police document was displayed, which shows that Blair Cottrell has been charged as follows, under the Racial and Religious Tolerance Act 2001, section 25 (2):

The “informant” for this charge is stated to be one Detective Senior Constable Erin Ross (34952) of the Bendigo Crime Investigation Unit.

The Racial and Religious Tolerance Act 2001 is a farce, as is similar legislation in other States and at the Federal level. It is a political law designed for a political purpose; the intent is to silence criticism of the realities of Multiculturalism. It is a broad-reaching law, whereby anyone can be charged for “inciting . . . severe ridicule” of a person or persons of any race or religion; it is an incredibly subjective law that could be used to fine or jail just about half the country. Anyone could be charged by the police for making a comment against Islam, Scientology, or even Satanism. You could even be charged for telling an Irish joke. These Multiculturalist laws are anti-democratic, but the Multiculturalists don’t care.

Muslims are not a race.  Islam is not a religion, but a political ideological cult – because outside mosques Islamic sharia prescribes strict unquestionable laws governing human behaviour, ritualistic practices, human interactions, social order and relations, and duties in every aspect of life: personal, familial, religious, social, moral and political, including punishment, finance and property ownership.  There is no strict or moderate interpretations – there is only one Quran rule book from 632 AD.

Under the Multiculturalism laws, the police are being used as political tools to suppress political opposition; this is typical of authoritarian regimes. Whilst the police in Australia have not reached the anti-democratic depths of the KGB and the Gestapo, they are heading down that slippery slope by engaging in political persecution of political movements.

Multiculturalist regimes want any staunch patriots, who have the temerity to criticize Islam, to be silenced. They want to stop free speech in Australia.

If you are a sensible traditionalist or a staid conservative, you are automatically deemed to be a “hater”, but somehow the most rabid hate-filled anti-traditionalists and anti-nationalists are not called “haters”. 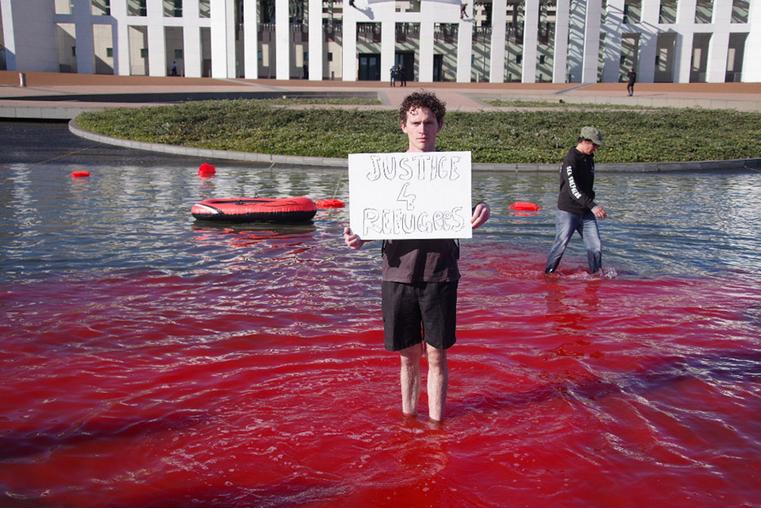 Leftist Third World migration advocates pollute the pool outside Australia’s Parliament with red dye (and abseil on the building) yet avoid prosecution.  Any different to red dye on a footpath outside Leftist Bendigo council?  Rules for some?

Laws against so-called “religious and racial vilification” and “race hate” are all about word-play and spin-doctoring, not about justice. These laws are all about the intended political suppression of opposing views; they are an anathema to any true democracy.

The rabid Multiculturalists don’t give a brass razoo for the continuance of democracy in Australia. Our forebears worked and fought to create a free society, but the Multiculturalists are intent on destroying it. The true blue Australians who fought for our nation would be rolling in their graves if they could see the state of things today.

When the Australian nation was founded, it was founded as a free and democratic society. If the Multiculturalists get their way, it will never be so again.

Real Australians need to support the Bendigo victims of Multiculturalist ‘fascism’, as it is part and parcel of supporting all freedoms in Australia.

Australians should have the right to free speech on all cultural, economic, historical, and social matters; if we do not, then we are not free.