Pauline Hanson calls her party One Nation, but which one?  Increasingly her choice of candidates are as anti-White Australian as you can get.

The redhead has tried Chinese (Shan Ju Lin) but she was too straight for on-topper James Ashby.  Critical of the Laborals opening the floodgates to immigration, in her maiden speech in 1996, Pauline highlighted the reality of Australia being “in danger of being swamped by Asians“.

Just before Christmas 2018, One Nation in Western Australia announced that its State Secretary was Chinese and that a sizeable chunk of its membership in the State is composed of mainland Chinese migrants.  Senator Hanson endorsed Chinese (Tshung Chang) to contest the WA Treasurer Mike Nahan’s seat of Riverton.

In fact Pauline has really taken to Indian, sidelining Aussies in preference if Indian Amit Batish to be her party’s treasurer in Sydney.  How many thousand Australian accountants and IT professionals are displaced or increasingly underpaid because of the mass influx of Third World Indians stealing their jobs, Pauline?   Batish is recorded as the party’s “agent” with the NSW Electoral Commission. 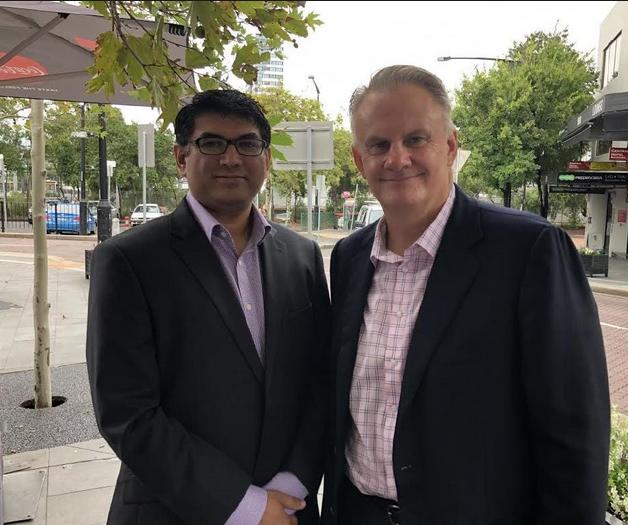 These days fish ‘n chips are clearly off Pauline’s menu.

On her comeback in 2016, Pauline spoke in the Senate this time warning that “now we are in danger of being swamped by Muslims”, reworking her 1996 effort.   Over twenty years, despite the relentless unarmed invasion by Asians, particularly Chinese, Pauline had acquired a taste for noodle, but not falafel.

A year later, she pulled the burqa pantomime, again in the Senate.

We have often wondered about whether One Nation was some sort of ‘controlled opposition’ and on our assessment there have been more than several signs of it over the last three years.

In the last three years, Pauline has made all sorts noises about the ‘danger’ to Australia of Islamic migration, of terrorism and so forth. She revised her position on Asian migration such that it became basically okay, but she dug her heels in about Islamic migration.

Along with Mark Latham’s team of ex (sic) Liberals, a Muslim woman will contest a northern suburbs of Sydney seat.  On February 4 in 2019, after having rightly condemned Islam for promoting “a culture and ideology incompatible that is incompatible with our own…in Australia’s open, secular and cohesive society“, Pauline well, recruited a Muslim candidate.

Emma Eros a Lebanese Muslim activist living in Sydney’s Islamic ghetto of Lakemba, has been chosen as Pauline’s candidate for the NSW state seat of Hornsby, some 30km to the north, for the approaching New South Wales state election to be held on Saturday March 23 in 2019.  “Come Ramadan, I fast when I am able to and I practise religion from within.” 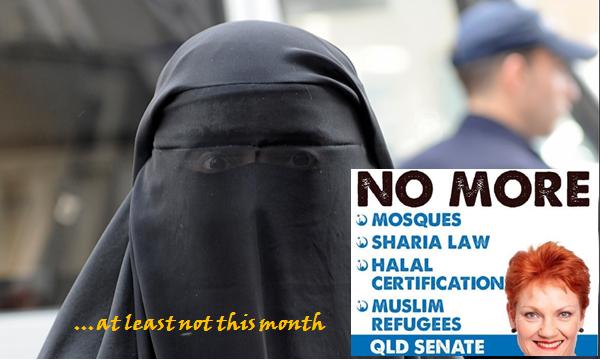 Emma Eros:  “I’m a Muslim — this is why I joined One Nation”

Pauline Hanson’s Chief of Staff James Ashby has reached out to the disaffected, like dumped Labor leader ‘Mad Mark’ Latham.  Latham’s now a One Nation candidate, for the time being at least, unless he speaks his mind again.

Well, ‘Mad Mark’ didn’t take long.   When furore broke out across rusted-on One Nation’s support base last month about Pauline’s backflip to Islam, ‘Mad Mark’ disowned the loyal critics as being of the  “Lunar Right” and he clearly rejected them for the “inclusive party” he is now building.  His ‘Lunar Right‘ slur will be his Hillary moment – when in the 2016 presidential Hillary Clinton infamously dismissed everyday struggling Americans as being a ‘basket of deplorables.’

Of course, One Nation has pushed its own version of ‘inclusive’ for quite a while.

As Pauline said in 2016: “you don’t have to be white to be an Australian”, something she repeated last October in the Senate during the stoush with Senator Anning.  Definitive, we would think! 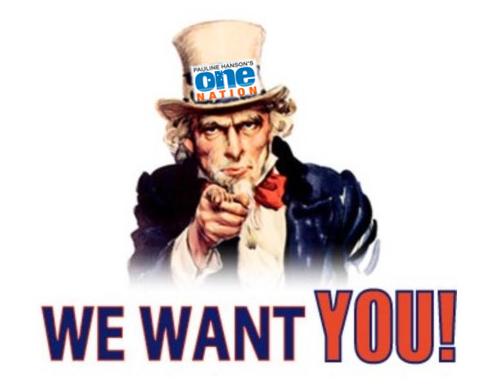 So if you’ve got some time on your hands, perhaps a bit bored, even if you’ve arrived straight off the plane, or your visa is about to run out.  If you relish the limelight, then consider becoming a One Nation candidate.  Our secret donors will pay you a retainer and if you get elected, so long as you say only what we want you to say, then Australian political life is your oyster!

Our values are subject to change without notice.  White Australians need not apply.

THE ASYLUM OF ‘MAINSTREAMING’

Latham’s thus far is towing the Ashby line that One Nation is an “inclusive party” – foreigners, cultists, deviants and all.

Latham’s line is about ensuring One Nation is based on the ‘mainstream’ logic and norms, so it isn’t regarded by its enemies in media and in the other parties as a bit ‘radical’ or some such. Mainstreaming is that arbitrary search to be considered reasonable and acceptable and proper according to rules set by people who do not agree with you!

A mainstreamer will do just about anything to get to that place. Getting there is maddening to some mainstreamers and drives them into the asylum: there is forever another hurdle of respectability to leap, another test on the quest for the mainstream.

True to Labor Machiavellian form, Latham is doing ‘whatever it takes’, like Labor’s Michael Daley, but without the access to the pork-barrelling.   The lure of the mainstream is a control mechanism the powers-that-be offer the aspirant. Once hooked on the notion that power borne of respectability and acceptability is there to be had, the hook is in too deep!

Malcolm Roberts, a One Nation leader, has confirmed: “To me, Emma has done exactly what One Nation has been calling on new Australians to do. Assimilate, support our laws, support themselves, value our way of life and in so doing advance this beautiful country for all Australians.”

Roberts demonstrates that One Nation was always that and therefore is really only a system adjunct and in practise a ‘conservative’ satellite for the Liberal Party.

We have heard there are resignations from One Nation and disaffection among many in the base simply because it is a policy shift that ‘jars’ from the image Pauline’s party puts forward.  Indeed, there is an indication that this process may intensify.  As ever, all decent One Nation members may have a home in Australia First and their voters can accept we do not shift positions for supposed ‘support’.

What is fairly clear is that One Nation is making a serious statement. It is saying it is prepared to abandon a part of its supporter base in search of a new grounding as a mainstream conservative party and possible ‘ally’ for the Liberal Party (Latham has called for the re-election of the NSW Liberal government).

Now we might say that it always was that, but in the past One Nation was quite prepared to put out the suggestion it was something else, perhaps even a nationalist party. That pretense is gone.

Pauline Hanson was never an Australian nationalist, but just a narcissist ‘One Pauline’ Hansonite satellite to the Libs.   Dumped One Nation candidate for the Queensland seat of Mulgrave, Peter Rogers, in January 2017 hit out at Hanson over his dumping, suggesting One Nation had fallen under the control of Ashby.  “My personal view is Pauline is the puppet and he [James] is the puppeteer.”

It has become a badge of honour to be a candidate unceremoniously ‘disendorsed’ by Pauline.

Given that One Nation is prepared to jettison some supporters, we shall admit that we will consider taking them on board.  We remain Aussie ‘meat and three veg’.  Mad Mark’s “Lunar Right” folk are those who once took One Nation seriously and even more so – may be those with a nationalist bent still locked up inside a conservative mess!  Our door is open. 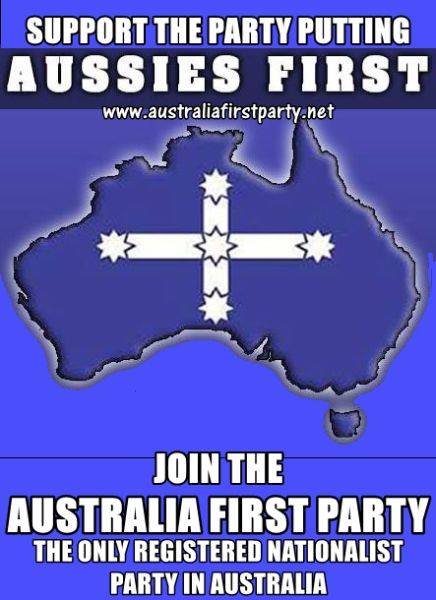