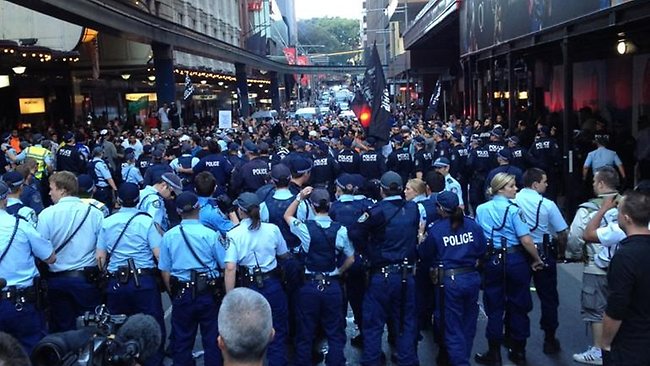 10% of Australia’s National Budget in 2015 is mainly to tackle Islam!

Keeping Australia and Australians safe and secure is the highest responsibility of any government.  Because of Greens-Labor letting in hundreds of thousands of immigrants from the Third World and Middle East into Australia and inculcated by multiculturalism dogma, Australia’s enemies are within.

So the national budget for 2015-16 sees over $35 billion being spent on defence, national security and law enforcement.  That is about 10% of Australia’s total government annual expenditure of $434 billion.   That wealth should have otherwise gone to needy Australians – our born and bread underclass, our struggling small businesses, our farmers, and to rebuilding Australian industry.

But no, more and more of our hard-earned wealth is going to immigrants as welfare and to tackle the social harm they cause us.  Most are muslim.

Banning Islam in Australia and deporting all Muslims back to where they came from, would better solve this now internal social scourge.

Australia’s National Terrorism Public Alert level was raised in September 2014 to high because the threat of Islamic terrorism at home and abroad has increased.

Since then, we have seen the horror of the Martin Place siege by an Islamic and the stabbing attack by an Islamic on two police officers in Melbourne.

Overseas, we have seen the rise of the terrorist organisation Daesh, also known as ISIL or Islamic State. These terrorists have exploited Obama’s hasty exit from Iraq and the ensuing civil war in Syria to gain strength and seize territory in Syria and Iraq, murdering thousands. But its impact is not simply in some distant land.

The number of foreign fighters born in Australia to Islamic immigrants is increasing, the number of sympathisers and supporters of extremism is rising, and the number of potential terrorists, including in Australia, is growing.  It is mainly due to failed multiculturalism policy that encourages unAustralian cultures to flourish in ghettos in our cities.   Immigrants breed and send their offspring to Islamic schools and colleges away from Australian society where they learn to hate Australians.  The internet and social media is making it easier for extremists to brainwash and recruit young and vulnerable people in our community.

There are at least 100 Australian-born offspring of Islamic immigrants fighting in Syria and Iraq and close to 160 supporting terrorist organisations, including around 30 who have returned from fighting overseas. The challenge now is much greater than in previous conflicts where fewer Australians were involved.

The Government has responded and is continuing to take the action necessary to ensure Australians are safe and our border is secure.

The Government is investing $1.2 billion in new funding for national security in the 2015 Budget, building on the $1 billion in funding we announced in the 2014-15 MYEFO.

This will be used to aid the current government’s multi-pronged strategy to counter threats to Australia and Australians. This includes taking action by:

Investing in our security

Working with the community

The Government is investing $1.2 billion in new funding for national security in this Budget, building on the $1 billion of funding announced last year.

The effect of new measures has already been felt, with greater coordination and new frontline personnel and equipment helping to protect Australians from harm.

In this Budget, the Government is spending $450 million in new intelligence measures to protect Australia and Australians.

$296 million will be invested in new information technology capabilities for Australia’s intelligence agencies, to help them to collect and use information more effectively.

$131 million to assist the telecommunications industry to upgrade its systems to implement the Government’s metadata retention policy.

Law enforcement agencies use metadata to detect and prosecute serious crimes, including terrorism and crimes against children.

$22 million will be provided to combat extremist propaganda on the internet and social media.

In this Budget, $750 million has been provided to extend and expand Australia’s military operations in Afghanistan, Iraq and the Middle East.

Australian personnel in Iraq are playing a key role in countering violent extremism at its source. $382 million will be provided to continue our involvement with the international coalition assisting Iraq.

Australia will provide 300 personnel to train and rebuild the Iraqi security forces as part of the Building Partner Capacity mission.

The $131 million provided by the Government for metadata retention represents 50 per cent of the capital costs to be borne by industry, as estimated by PwC.

In addition, $23 million will go to relevant agencies such as the Attorney-General’s Department and the Australian Crime Commission to cover ongoing costs relating to the implementation and oversight of the data retention scheme.