They’re all just “old-fashioned shysters and fraudsters”, according to the New South Wales Independent Commission Against Corruption (ICAC).  The Liberal Party is are just as bad to the core as is the Labor Party.

It’s called ‘Crony Capitalism‘ and Sydney politics has long been rife with it.   NSW Labor’s autocratic patriarch Bob Carr seeded the ruckus, enamoured by his steel-cut oats and flat-stomached Machiavellianism.

But bullshit-alerted and then decent Liberal Barry O’Farrell, promised us disaffected voters that governance and public trust was to be restored beyond Bob’s mess. Bazza tried and tried.

Then Labor’s (Lebanese) O’Beids were found by ICAC to have loaned $3 million coal deal money to the chief executive of the company, (Italian) Nick Di Girolamo, to get a profit stake in promised lucrative spoils from Sydney Water.

So what went down at Otto’s restaurant back in November 2010?   It has become another one of those high-powered government-industry lunches, this time booked at an exclusive Woolloomooloo harbourside restaurant.

Kelly, a former Labor Lands Minister was convicted of corruption in 2011. The year prior, Labor’s (Italian) Karyn Paluzzano MP had been convicted of lying and corruption.

After the post-Carr Labor era, the Libs gave government a crack – we are better than that lot, the Libs promised – cross our hearts hope to die!

And so the Libs, in the same skin as the Labs, Sydney’s ‘Rum Corps’ culture still prevails, pushed up from corrupted power-elite dank and filth…

Liberals Chris Hartcher as former NSW energy minister has since been linked to a plot to make false corruption allegations against two senior Sydney Water executives. Hartcher and two other Liberal Party MPs Chris Spence and Darren Webber have been suspended from the NSW Liberal Party after being named in two current major corruption inquiries.

Liberals like Labor, let power go to their heads and big note themselves when in government; thinking nothing of billing taxpayers for limousines, flights, entertainment, casino visits and in the case of Craig Thompson, using prostitutes. Catholic Kristina Keneally, while a junior Labor minister in 2008, gifted $86 million of taxpayer funds to the multi-billion dollar Catholic Church for it to host World Youth Day in Sydney.

O’Farrell on becoming premier had signed a thank you note, when aged 59 for a $2978 bottle of 1959 Penfold Grange thoughtfully (and timely) received from his lobbying mate Nick, then running Australia Water Holdings (and enmeshed with the O’Beids).  Yesterday, Liberal Premier Barry O’Farrell decided to angrily claim in front of television media that he had categorically refuted the red.

It must have been massive memory loss-making hermitage Bazza!   It must have tasted twenty times better than Macdonald’s $130 Tasmanian pinot noir at Tuscany’s. Ministerial memory losses before ICAC have become standard counsel.

Yesterday, Bazza decided to “categorically refute” to the corruption enquiry that he had received the bottle, well aware of the good memories but naively presuming Nick was a confidant.

But then Bazza’s thank you note turned up..”thank you for..the wonderful wine. 1959 was a great year, even if it is getting further away.”

Bazza has just resigned in disgrace. So guess he won’t be meeting and greeting British royalty today. 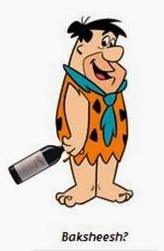 Bazza’s Badgerys Creek lobbying deal has claimed its first scalp by the democratic process – Bazza, like Greiner before him.

Tony Abbott go back to your Canberra drawing board and resist giving into the same corporate lobbying temptations.