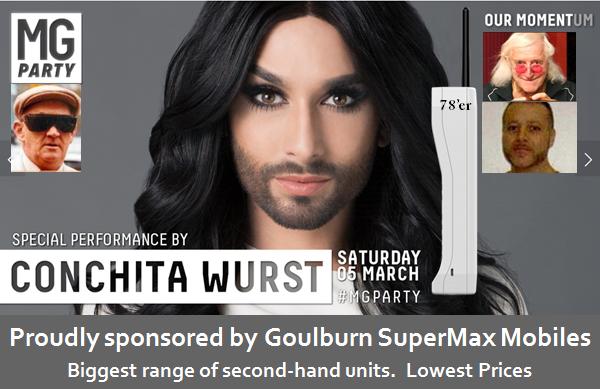 The protest to legalise homosexuality has always been a political campaign to wedge increasing allowance of fringe element social deviance.  Faggots have since attracted many flocks of birds of a non-breeding feather – flocks of frocks, so to speak.

The 78’ers so arrested in 1978 have succeeded in branding Sydney as America’s homosexual San Francisco.

If the Darlinghurst parade and festival this year, still euphemistically branded still as a ‘Sydney Gay and Lesbian Mardi Gras‘, was liberal and free and embraced inclusion and diversity, why do the organisers restrict entry to those of deviant sexual orientation?

Who in Sydney approved of their proud historic city being so branded.  No-one. When was the referendum held?  It wasn’t.

It was fascist imposed by the likes of arrogant Sydney Lord Mayor Clover Moore.

This bitch business-flight classed herself to Paris recently with her two ‘toy girls’ for her own personal ideology conference called ‘Climate Change’ – all funded by Sydney ratepayers to the tune of $46,000+

Where are the parade floats for normal Australians (derided as abnormal “straights”) and even more, the culturally diverse traditionalist Muslims?

Extreme ideology insisting on exclusive lifestyle compliance is generally considered to be a cult.  Sexual Deviance is a Cult.

PM Malcolm Turnbull is complicit in this deviant cult by his habitual annual attendance, so relegating Mal as unrepresentative of most Australians.

But what happens in Sydney is no way religious.  It was always politically intended to not just try to normalise deviance in Sydney, but to outwardly evangelize sexual deviance.

And it was all ‘bugger off’ what any typical and normal heterosexual Sydneysider thought. Friggen ‘Gay Rights’ mean that straights are expected to bend over for queer deviant ideology.

The Mardi Gras has always been a political crusade to evangelise orifice diversity and related sexual deviant extremism like undermining marriage.

Consider the conspicuously timely propaganda of SBS Television to air: