‘Jobs and growth‘ for whom, Malcolm?

In New South Wales, many people hold Mike Baird’s Liberals in contempt of democracy for their autocratic impost of forced council amalgamations in direct defiance of the wishes of ratepayers. Baird’s autocratic takeover of local representative government is premised on the lie of saving ratepayers.  Smiling Mike Baird has approved extortionate rises in council rates and charges.  Annually, the Baird Liberals approve hikes in electricity, gas and water charges to NSW households.   This has been the consequence of neo-liberalist privatisation and deregulation of publicly-owned critical infrastructure. 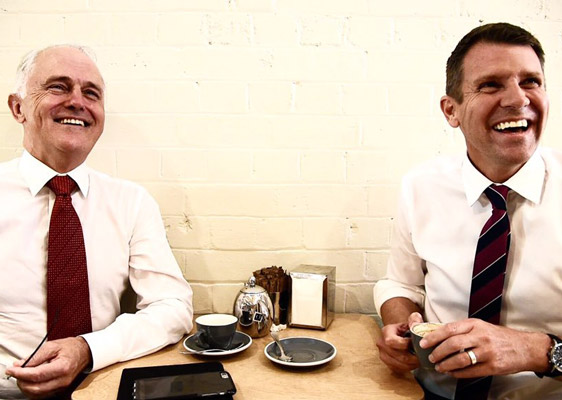 The Liberals have made the cost of living in NSW unaffordable to most.

In both cases, Liberal Party arrogance and contempt for democracy has unleashed justified ‘voter backlash‘. In our view both undemocratic acts ought trigger Citizens Initiated Referenda, which we advocate as one of our core policies – however such democratic freedom remains denied Australians.

It is all but certain that desperate and equally globalist Labor will not win government tomorrow in the Lower House of Representatives.  But the Liberals are not guaranteed.  A hung Parliament would be the best outcome.

Tomorrow at the polling booths, Australian voters in New South Wales do have a once in three-year democratic moment to rein in the Liberal Party’s treachery, by protest voting in the Senate.  The Liberals can’t be trusted with autocratic free reign.

Australia First Party is not running a candidate in the Senate for New South Wales this round, but we suggest the following How To Vote to rein in the Liberals in the Lower House and to send a message of their bastardry.

We suggest that in New South Wales, citizens vote on the Senate (white) ballot paper in the following order ABOVE the line:

NB. This does not imply that any of the above parties have contacted us with a view to obtaining any recommendation.

But don’t vote informal. Someone’s got to stop the bastards!