Australia’s incumbent Prime Minister Julia Gillard has become the most hated woman, if not person, in Australia.  She backstabs, lies, cheats, deceives, breaches promises, cons, bribes, and shouts vitriol at anyone that gets in her way or disagrees with her.

She, like her toxic Labor brand, lies whatever it takes. 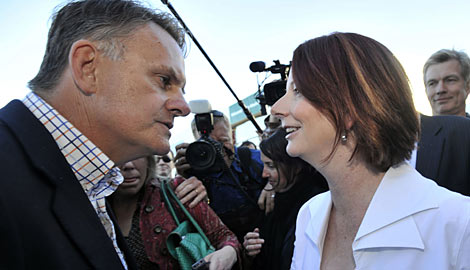 Labor will lose the forthcoming election in a landslide, and no more prominent a contributor in that defeat shall come from the disaffected vote of impoverished western Sydney, which has for decades been abused and abandoned equally by Labor and the Liberals.

Last week, puppet Gillard commanded by her Scottish Rasputin, on a fling decided to campaign desperately in western Sydney slumming it at Rooty Hill RSL.  What a waste of time that was.  And how much taxpayer money waste again wasted on her ego?

The locals weren’t fooled. Despite her pork barrelling promises of a billion for new roads in Sydney’s west and staged media appearances, most saw her stay as another bribing stunt.  She was robbing regional New South Wales promised billion for western Sydney anyway.

‘Free’ Trade dumping and the floating Australian dollar, Keating policies that Hawke, Rudd and Gillard have perpetuated, is seeing Australian manufacturing become redundant as we cannot compete with two bit Third World wages on Labor’s so-called ‘level playing field’.  Every month there are more announcements of mass sackings of Australian workers.  1570 sacked at Bluescope, 440 at Ford, 350 at Toyota, 700 at Boral, 150 at CSR, 70 at Rosella.  They cannot compete with cheap dumped imports and the high Australia dollar.

Then Gillard comes out spruiking a proposed crackdown on foreigners on special skilled ‘457 visas’ and prioritising jobs for Australians.  It is all Gillard spin and the people know it.

More than 4500 Daily Telegraph readers responded to an online survey about Ms Gillard’s western Sydney campaign, which starts with a rally of ALP faithful tomorrow night.   About 4000, or 88.6 per cent, of respondents said they thought Ms Gillard’s decision to sleep at Rooty Hill RSL, rather than commute from her official Kirribilli residence, was a “political stunt because the election is looming”.

Three women sitting in the public gallery shouted separate interjections at different points during question time.  One woman appeared to call Ms Gillard a “moll”.   Another called the Prime Minister “Juliar” and a third spoke about Ms Gillard’s recent visit to western Sydney.  “You didn’t visit us did ya,” she said.  They were escorted out of parliament, but they certainly got their message to the redhead.

But Gillard, despite her Lalor roots, has become so dazzled by the top job that she thinks she’s immune from public accountability and scrutiny.  She is only interested in her own future and will lie and slaughter anyone in her way. Gillard is truly a deceitful , patronising and irritating creature. This woman and her menagerie of ministers…. treat the Australian people with contempt. 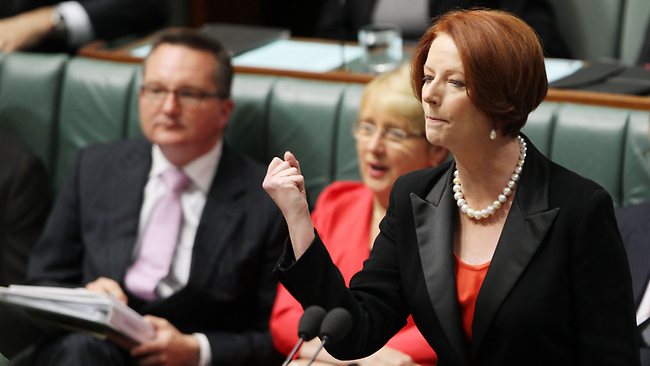 “a piece of work”

Gillard and her weak patsy men in Labor have corroded our country.  Our wealth, our valued freedoms, our envied lifestyle, low crime – all under her care have been trashed.  None of us have had any say.  She has failed background checks. She fraudulently came to power and has abused the privilege.

The people can’t even watch her on television, she has lost their respect and the word hate comes into play. Never before has Australian suffered such an abusive and divisive prime minister. 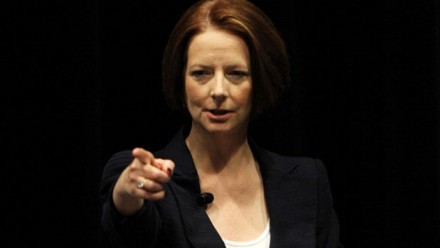 The moll has lowered the standard of office of PM