Hockey attacked Labor’s treasurer Wayne Swan for turning a forecast $1.5 billion surplus into a $19.4 billion deficit.   Hockey has claimed that Labor’s spending had bequeathed the nation a “historic legacy of debt”.

But hardly the “fiscal conservative” himself, Hockey, within weeks of coming to power as Liberal Treasurer, has exceeded Labor’s projected $356 billion in national debt demanding an even greater debt ceiling of $500 billion just to June 2014.

“In order to become the master, the politician poses as the servant”.

And the rest of the Liberals are happy to abolish oyr national debt ceiling altogether.

So the national Treasury has now borrowed $500 billion.  How much interest is being paid daily by Australian taxpayers to serve that debt?  With the bond rate at 3.5%, try $200 billion over ten years.  With Australia’s national healthcare bill approximating $150 billion, Liberal Health Minister Peter Dutton, would not have to tamper with Medicare or slug more out of taxpayers.

Liberal conservatism is the same as progressive Labor.

Labor’s Chris Bowen has stated the obvious: “Before the election Joe Hockey was against debt, now he can’t get enough of it.”

On top of that, Hockey has confirmed that his Liberal government has identified up to $130 billion in state and federal public assets that could be sold to raise capital for projects.

Public assets are not owned by government to sell.  They are owned by the public whose taxes paid for them. Only the public has a right to sell public assets and that can democratically only be done by a vote – either at election where a clear mandate to sell a specific public assets has been flagged such as Qantas or Telstra, or else by a referendum. 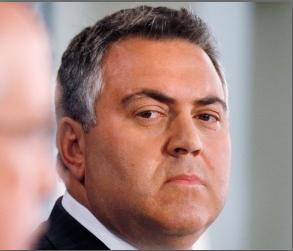