New Australian Bulletin has never had a Facebook presence. Our work is occasionally shared by trolls and our friends at Australia First Party, but that ended with our article regarding Capitol Hill, in which the admin who shared the piece was banned.

NAB was created to shun social media giants and hopefully encourage others to wean off them too. We have only three social media platform linkages and all are independent and dedicated to freedom of speech. However, none of them has the reach of the actual news page itself, which is what we aimed for. Our page hits dwarf anything shared on the external platforms, and in the case of Telegram, which is so useful to young neo-Nazi-globalists, it is outsized by about 20-to-1 in reach. Probably a good thing.

We hoped to bring readers back to the base publisher, and despite cynicism from some of our writers, it’s proven over time to be a wicked gamble.

We have long deplored Facebook, and the current world-shuddering situation in which Facebook has blocked all news links, along with a whole range of emergency, and community-related matter from Australian sources is music to us. It is the wake-up call to the world about this horrendous corporation.

The Australian government is working for Murdoch’s interests. But the core of the argument is correct. Facebook does act as a publisher, it certainly grants itself the censorious rights of one, and it takes the revenue without a flicker of conscience.

Facebook owns everything users post — just as with a publisher. But it’s a dangerous, insidious, oligarchical tech giant and since it became such an indispensable part of global communication it has acquired an unforeseen power.

Certain commentators make a comparison to the old days of the railroad, which transformed transportation and in so doing reshaped the world. In the early days, if a town on the company’s route quarrelled with the company then the response was brutal. They simply refused to stop at the town and that meant the town couldn’t get supplies, visitors, and its commerce was strangled. Many towns went broke and died.

This is what Zuckerberg has done — he is the railroad company, and Australia is the town.

His gesture is defiant, but ultimately futile because he has shot himself in the neck. With a bit of luck, it’s all good news from here on. Facebook won’t back down, and given the political momentum of this thing, the Australian government can’t. As with China, Australia is on point, while the rest of the world, brave souls they are, sits back and observes.

Australia needs its own social networking, and it’s an opportunity going begging for an adventurous local company to set up such. Sure, it wouldn’t be nationalist friendly, but it’s the principle we would support. It would certainly happen under a nationalist government.

Meanwhile, all Facebook has done is allowed Australia to see what life is like without it. And it’s better, much better. It is well understood that Facebook operates on a diabolical level that is psychologically addictive. It is harmful to users and should carry a health warning. But that’s something we’ve previously covered. Here we’ll get to the crunch.

While we could choose many tangents to digress upon, we elect to comment on what we believe is the most significant — how Facebook Woked the world (sic). And how, with this new turn of events, it can become un-Woked. Let’s take a moment to see how Facebook did, in fact, Woke the world.

It is fair to say that Facebook is integral to cancel culture, as is Twitter. However, it wouldn’t be accurate to argue that Facebook has been as dedicated to serving the grievance industry as much as Twitter. Facebook’s algorithms are its determiners of what content a user sees in their feed, and it’s that process of isolating what we might call its ‘markets’ that have created distinct bubbles for the politically-minded.

With shifts and changes, though, anything might happen. For instance, in the wake of the Capitol Hill protests all mention of anything related to the happenings on the Hill was censored, regardless of ideological affiliation. Yet, Facebook has long selectively banned users from what we call, just for the sake of this argument, ‘the Right’. They hadn’t done so independently, and in the case of Nationalists, government intervention was obvious. In the wake of the Christchurch Mosque massacres, Nine Entertainment (formerly Fairfax division) met with top-ranking NSW Police. The following day, an article appeared in The Age, The Sydney Morning Herald, and was picked up nationally.

Nathan Sykes, who an alleged journalist named a “troll”, was suddenly slapped with numerous charges over a matter that had already played out in Victoria’s lower courts. It was timed to create a ‘response’ against ‘the right-wing’ terror threat and was utterly bogus. Without going into the details, since the matter is before the court in March when Sykes goes to trial, it’s interesting to note that both his FB account and that of the president of the Australia First Party, Dr Jim Saleam, were simultaneously deleted by Facebook. They were banned.

This didn’t occur because a local FB moderator happened to be reading the news that day, it was because the NSW Police had requested it be so. This was collusion of state and social media which undermines the potency of the government’s stance on Facebook, which is all about the scratch.

That’s a close-to-home example we throw into the mix for its relevance. But if that means that Facebook has a fixed ideological position, think again. Among its many controversies, such as breaching users’ privacy on a labyrinthine scale, and its ‘Porton Down’ style experimentation on users (sic), there was the streaming of the Christchurch massacre, the WhatsApp policy change that meant users of that app would have their information shared with FB, and the Cambridge Analytica scandal, in which tens of thousands of users had their data accessed purportedly to help sway the election of Donald Trump.

We are qualifying the fact that any sense of its ‘Wokeness’ being an unshakeable adherence to a ‘right-thinking’ set of ideological convictions is erroneous. If in the current state of the cancel culture, there is a good thinking and a wrong think then Facebook has traversed the distance in-between for wholly mercenary gains. More so, especially, when you take into account how despite all of its ‘right think’ posturing it has no qualms about taking money from Communist China to promote that state’s propaganda, especially when that involves the persecution of peoples such as Uighurs and the Tibetans. Hardly the nice guy, is it now?

Yet, Facebook’s model created Woke. Around about 2008, Facebook began researching its user sharing models. It found that topics such as race figured highly. Likewise, the traditional news media began operating on a clickbait basis, which concentrated on such stories and with the two coalescing they created a ‘rage-bait’. Users were split on extreme divides, with the so-called Left on one end, being serviced by the platform’s algorithms, and the ‘conservatives’, being fed their diet of what irritated them.

Outside of conservative markets such as ‘Fox’ which is credited by the research conducted by the Pew Research Institute as being the primary source for conservatives, CNN, The New York Times, etc have all had a decidedly left-bent anyway. In the divisions created by Facebook that gulf became even wider. Far from following political parties, or individual politicians, Pew discovered that users were more likely to engage in social groups which were diverse but always more extreme.

We have not mentioned the role academia has played because we’re interested in Facebook. It cannot be discounted either. But with social media driving the agenda, after 2008 the tone of grievance culture reached its peak in Wokeness. Adopted as a corporate currency, and assumed as a style sheet by the mostly liberal media, Woke became an air-balloon, aloft without direction, drifting ominously over our collective heads.

As such, Woke became law. You were either ‘inclusive’ or ‘extremist’ and exclusive. Considering too that it’s only something like 20% of the population fixated on political causes, it’s also proven that the minority has pushed an agenda fixed upon the majority. Thus, people without a sensible political bone in their bodies adopted viral ‘tints’ on their profile whenever a major issue arose, such as Charlie Hebdo, Me-Too, Black Lives Matter and so forth…

Again, the Australian government’s stance is all about revenue for its media buddies. It has not taken this decision because of the toxic culture associated with Facebook and other social media; it isn’t addressing the ideological ‘death star’ that FB has become, it’s pandering to Murdoch and other media companies (rightly, as it so happens) so that the mooching Facebook either coughs up the revenue it’s diverting from traditional media, or it buggers off. We say rightly because Facebook must be recognised as being a publisher and then it may be held accountable and be forced to adopt standards. So far, there is no avenue of recourse to Facebook other than a ‘bot’ report button and an office address without a telephone number or a front door.

The impasse over this is delightful. Facebook isn’t about to cave, and Australians are none too pleased with FB’s cold shafting. We dearly hope that Facebook either ceases operations here or that users abandon the monolith in droves. It has more power than any government and placed in the hands of a dishonest, greedy, maniacal, unscrupulous little Zionist.

There is only a win-win to Facebook shutting off Australia, and we hope other countries are ready to show Zukerberg that he isn’t Lex Luther. By taking away this divergence created by Facebook, which has corralled dissenting groups into one spot and afforded the security services unfettered ability to spy, and infiltrate, certain freedom can arise for those of us disinclined to follow the increasing dictums of world government.

Likewise, those middle-ground punters who are converted to social justice positions out of fear of exclusion will no longer be crammed shoulder to shoulder with the Woke zealots and their propaganda thresher. Given how it all comes together at the one point, by shutting it down, the trance is broken. We can already see so, with antifascist (sic) pages such as the state-aligned Slackbastard now having blank pages. That’s a day we’ve long waited to see. It’s amazing how without this connectivity the little lambs are lost, left without a herd or a shepherd to guide them.

If this had happened in 2015, we’d never have had to suffer the Patriot Movement which gave rise to banes of nationalism such as Tom Sewell, Neil Erikson et al. Many would still have jobs, and just as many might not be in jail. 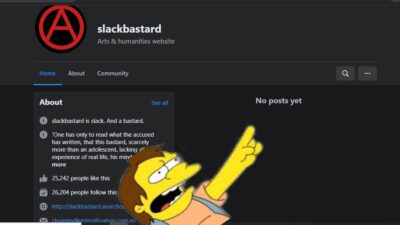 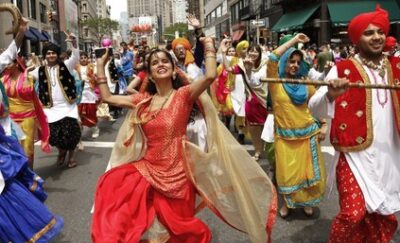