Golden Dawn gathered for their annual meeting in Greece last week despite the Greek government’s crackdown on the party and its leaders.

Members reaffirmed their country’s glorious history by boldly assembling at the Leonidas Monument in Lamia, in Central Greece. The landmark commemorates the Battle of Thermopylae in 480BC, in which 300 Spartans heroically stood and held the line against 10,000 Persians before falling to the overwhelming enemy numbers three days later. It is one of history’s most famous battles.

Therefore, the arena provided the appropriate forum for the meeting, with members defiantly flying the party’s banner and its distinctive black-red-and-white meander symbol.

Ourania Micholaliakos, daughter of the imprisoned General Secretary of the party, addressed the meeting.

In 2020, the core leadership group of Golden Dawn was declared a criminal organisation by a court that ignored the submission by the prosecutor to acquit on that charge. Nonetheless, the party continues to function, albeit in trying circumstances.

The political trial and sentence of Golden Dawn members have angered nationalists the world over. The suffering of Greece is something they see faced by all. The struggle of the Golden Dawn is akin to Greeks struggling for the identity and independence of their lands.

They understand that Golden Dawn was conspired against by a corrupt traitor class and their liberal and Left allies. Protests will take place in several countries.

In Australia, as we emerge from the lockdown psychosis, actions will occur to highlight the criminal behaviour of the Greek state against the nationalists. 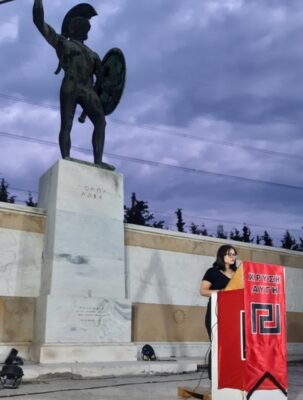 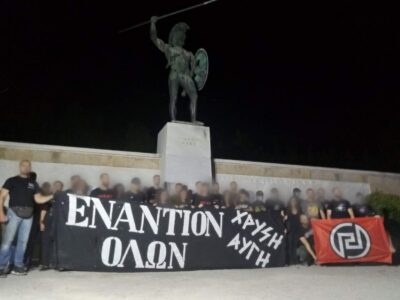