Australia First Party declines interviews with the metropolitan press because it operates to a script that never changes.

Whenever nationalists or patriots are involved, forward comes a litany of bull dust about connections with neo-nazis, anti-semitism and incipient violence.

You will get it anyway, so it is better to lend it no credence by collaborating in your own defamation. Yes, you never took the opportunity ‘to put your side of the story’; but the liberal garbage-press is not there for that purpose anyway. It is better to take your right to silence.

So, the United Patriots’ Front (UPF) have found themselves roundly smeared by the Melbourne Age ahead of Saturday’s rally at Victoria’s Parliament House.

In my own case and on over thirty-three years of experience, Fairfax has long-ago graduated from suggesting I might be – or perhaps have been – a neo-nazi, to using neo-nazis under the cover of anonymity to say things about me (based on their great wisdom no doubt?).

In fact, Fairfax has used the very same neo-nazi loons whom several years before I was last smeared they had reported on as the living Aussie representations of shock-horror-evil within our society. 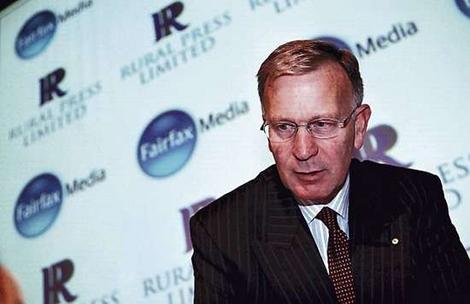 My reputation has descended into running a rag of the Left

Of course, claims I have made even in academic work that this freak-show has no substance and in fact essentially doesn’t exist – are ignored. Ditto my conviction for political violence.

They know I have challenged its veracity and that along the way I brought down (through helping a Royal Commission no less) the corrupt political policeman who procured this conviction – but that means zero too. It is not defamation to say I was “convicted” of an offence, but it could be defamation if they said the conviction was based on the truth and anything I might say now is a load of nonsense. So, the tale is told selectively.

The United Patriots’ Front copped it full blast tonight. Links with the neo-nazi Golden Dawn were asserted; but Golden Dawn is not neo-nazi. And members of the UPF have guns, lots of guns; yes, they have some guns, but they are licensed and so do farmers have them too.

Then there was that matter of UPF members taking pistols to the rally next Saturday.

Come, come, Fairfax – yes, indeed police are investigating, but even a dopey reporter could see the story was most likely fabricated; better to just say the cops are investigating, because the existence of this investigation is true at least and the smear can still be run that the pistol tale might also just be true.

The editors are masters of how to defame without defaming. They create a picture and when it looks a little ugly that means the target suffers from people turning away or holding back. They can then marshal the opposition to oppose the target.

Right now the UPF have angered the Victorian ‘multiculti’ establishment. The Melbourne Age is their propaganda tool, but it is not the only one.
When the extreme-left anarchists and Trotskyites break the law next Saturday and attack the police, some innocent people and so on, they will be sanitised by the Melbourne Age and other media into “anti racist demonstrators”.

The UPF is very right to say that the extreme-left must be opposed and exposed for trying to enforce street level ‘anti racist conformity’. No wonder they were smeared tonight. 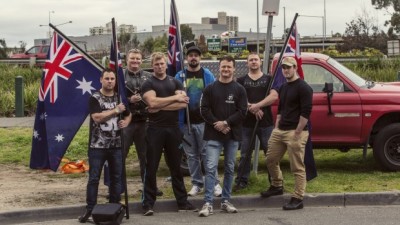 For those interested, this is how John Fairfax’s Age article read:

This is The Age author’s email address:  patrick.hatch@fairfaxmedia.com.au

“Members of the United Patriots Front, including Neil Erikson (middle in blue jacket) and Blair Cottrell (to his right) behind the ABC’s offices in Melbourne. Photo: Meredith O’Shea

An anti-Islam nationalist group that has aligned itself with neo-Nazis and other far-right organisations says it will hold Australia’s biggest ever “patriot rally” at Melbourne’s Parliament House next weekend.

The group, United Patriots Front, is a breakaway of the Reclaim Australia movement and includes a man convicted of anti-Semitic harassment among its leaders.

The UPF claims solidarity with the Greek neo-Nazi party Golden Dawn, which was founded by Holocaust denier Nikos Michaloliakos, who along with other party members is facing charges in his homeland of being a member of a criminal organisation.

Police are investigating messages sent on social media that appear to show discussion about members “packing” (slang for bringing a weapon) at Saturday’s rally.

A Victoria Police spokeswoman said investigators were checking the veracity of the messages.

About 70 members of the UPF attended a violent anti-Islam rally on the steps of the Richmond Town Hall in May, which saw scuffles break out between members and counter-protesters.

One man was charged with weapons offences after allegedly being caught carrying a knife at that rally.

The group also came to prominence when it held a rally late last month outside the ABC’s Melbourne office to protest over the appearance of former terror suspect Zaky Mallah on the broadcaster’s Q&A program.

About seven members of the group waved Australian flags and cooked a pig on a spit roast, in an apparent attempt to upset Muslims, who are religiously obliged to not eat pork products.

The UPF was formed by a group of self-styled Facebook political preachers who have at times used violent imagery to promote the upcoming rally.

One of the group’s administrators, Neil Erikson, pleaded guilty in the Melbourne Magistrates Court to stalking in February last year, after he abused a Melbourne rabbi in a series of anti-Semitic phone calls.

The judge found Mr Erikson was motivated by “prejudice, if not hatred, toward the victim because of his race,” according to reports by AAP.

The group in June posted a video featuring Mr Erikson alongside Australia First Party chairman Jim Saleam, who spent three years in jail during the 1990s for organising a shotgun attack on the home of an African National Congress representative.

A video posted by its official Facebook page shows another of the group’s leaders, Shermon Burgess, shooting a rifle, along with comments saying: “us right wingers have all the guns… when shit hits the fan one day we will survive.”

Mr Burgess was formerly an organiser with the Reclaim Australia movement and runs his own Facebook account under the moniker The Great Aussie Patriot, which has over 22,000 likes.

In a recent video promoting the rally, Mr Burgess says the group believes in peaceful protests but “that if someone wants to bring violence to us, we will defend ourselves, and we will hit back just as hard.”

Blair Cottrell, who described himself as the organiser of the Melbourne branch of the UPF, told Fairfax Media on Sunday he did not know anything about Golden Dawn or Jim Salem and instead was focused only on “uniting the spirit of Australia”.

“We have one goal and we will pursue it: to protect the nation from foreign invasion, influence and threat,” Mr Cottrell said.

When contact via email on Sunday, Mr Erikson said his stalking of the Melbourne rabbi was an attempt to create a comedy podcast which “backfired”.

He defended his appearance in a video alongside Mr Salem, who Mr Erikson said denied any involvement in the attack on the ANC member for which he was jailed.

The group has also organised an “all patriots” overnight bus to bring supporters from Sydney to the rally.

A police spokeswoman said the force was aware of both rallies organised for Saturday.

“Victoria Police respects the right of the community to express their views peacefully and lawfully, but will not tolerate those who break the law,” she said.