The Reclaim Australia rallies are for this coming Saturday (Melbourne) and Sunday (elsewhere).

Nationalists will participate as individuals and in small groups.

The extreme-Left has publicised its intent to counter-demonstrate and try to gain wide publicity and disrupt the events.

Note too, that many of the people supporting ‘Reclaim Australia’ are not nationalists, nor anti immigrationists, nor for instance even persons who understand that Israel and Islamism are equal problems in the Middle East component of world politics.

Therefore a special set of rules may be useful.

1. That nationalists take material for distribution. Specially prepared simple items are best and you may assist to distribute. Work the crowd: take their ideas and make contacts.

2. A small group on nationalists should remain together around a banner of flag.

3. Nothing should be carried that could even remotely be described as a weapon. You may be searched.

4. These are not our rallies, so we are only participants. So respect the organizers, even if we politically disagree with them.

5. Be aware that the extreme-left may throw objects – paint or eggs. Do not break ranks to pursue.

6. As is usual practise, the extreme-left will send out runners who will get behind and amongst the Reclaim protesters. They will seek to steal personal items and any banner or flag or other object. It would be correct to restrain such persons, but vigilance is the key. Alert any marshalls to this practise.

7. Do not allow yourself to be photographed with any provocateurs and do not engage in any conversation with them. Some provocateurs are known to us in each city. Treat them as lepers, but note what they do and then speak to whomsoever they try to approach and to the organizers.

8. If the Police give any direction, obey it.

10. Do not speak to any newspaper or media. This event will be crawling with journalists. If any comment is needed by nationalists, it will be done by your team-leader for the day. In any case, we do not speak to certain media as a matter of policy (metropolitan press, certain journals and so on).

11. When leaving the protest – leave in groups. Be aware that you may be on public transport where the extreme-left may also appear. They attack people when they outnumber. So, do not travel alone.

12. Obey a simple dress code: neat casual dress and wear only appropriate badges or patches and so on. Political ones only – and nothing personal.

13.  The ultimate authority, Victorian Police Chief Commissioner, Graham Ashton AM, is in control of the policing, risk assessment of this demonstration and responsible for maintaining public order and for mitigating violence and riot. Let there not be blood spilled. Is Ashton properly prepared for this well publicized protest? 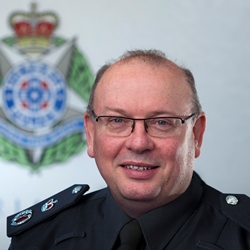