T’is blind multicultist appeasement, Fairfax siding with the imported sharia muzzies. Not fair at all. The sensationalism is reminiscent of The Truth newspaper sleaziness that vividly exploited socialite Melbourne during the 1970s and 1980s. 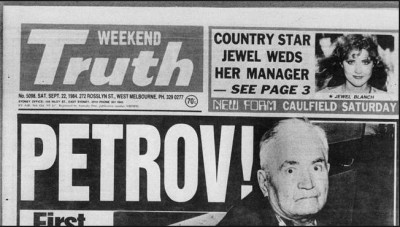 The Age emulating Melbourne’s sleaze ‘The Weekend Truth’ of old…aka the OMG Struth with a titillating page 3!

Holden’s job is already on the ropes for his extreme lefty propaganda. 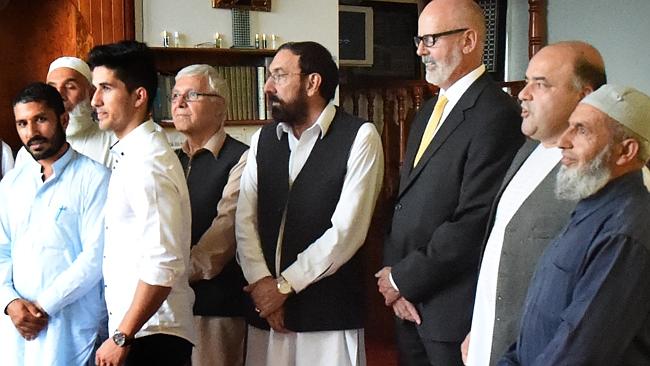 Takes one to know one… 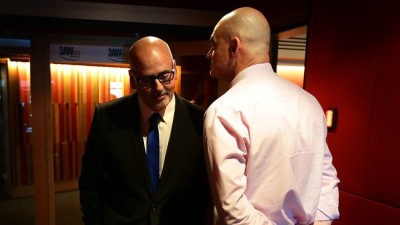 Meanwhile, a considered response to The Age from the Australia First Party, to which Holden may wish to check his comprehensive archives:

‘ON THE ROAD TO LOAD-UP? A PIECE OF FAIRFAX JOURNALISM IS A MAJOR PROVOCATION’

“The inter-relationship between journalism and political policing is a fact of Australian life.

Generally, journalists have been known to play tricks with the truth, setting up targets for politicians to make ground against, or destabilizing political groups, or upsetting individual members of dissident groups such that they no longer function on a personal level

Yet the most sinister thing they have done is setting people up for political police harassment, violence – and even criminal ‘load ups’ which result in prison sentences.

I am reminded of these facts after I read the latest piece from The Age (link below), I have a grave concern that journalist Luke McMahon has created a propaganda ‘image’ of a leader of the United Patriots Front (UPF) – Chris Shortis – as a psychologically dangerous gun owner who might resort to a terrorist act. Indeed, he discusses him at length in the same political and gun-owning and toting contexts as the Norwegian mass killer

Andreas Breivik. The Age’s self serving statement, that they are not suggesting Mr. Shortis would do any such violent act. is just a legal cover against Mr. Shortis if he were to pursue a defamation action.

The Age knows what it does. When a mass newspaper discusses a man amidst pictures of guns, displays a photo of him shirtless (which is demeaning) and quotes a (biased) academic full of rhetoric about terrorism and the lunatic Breivik and how terrorism gestates – we can only conclude that Mr. Shortis is a target. This article is the classic piece which produces the delegitimization of the target. Of course, the article implies that the entire UPF is illegitimate, racist and potentially violent. I would say without fear that this is The Age’s intent.

The smear piece is defamation, but it is something else. It could prefigure a terrorism trial.

The possibility that there might be a disturbed person who wants to perform a terrorist act, or some other act of politically motivated violence aimed at that amorphous thing called ‘Islam’, is quite real.

Why would it not be?

Putting ‘loan wolves’ aside, such an individual could gravitate to a group protesting at the thing he abhors (at least ‘appearing’ to in his fractured mind).

This person could have conversations with Mr. Shortis whom he hopes to employ in some way and although both could have had what would really be innocent conversations it might be held otherwise.

Given a high degree of surveillance in operation, there may be photographs of ‘conversation’ in motion and recordings. Mr. Shortis has met hundreds of people. What if he has met the real budding Breivik? A charge of conspiracy could be generated that would be very difficult to disprove; and note, in such trials, it is the allegation, the accusation, that carries the weight which can find an innocent man guilty. That would be so particularly if the disturbed man is ‘persuaded’ to incriminate the primary target in exchange for a lighter sentence.

Is all this just ‘paranoid’ thinking? No. It has happened in Australia before.

Now, I do not mean to break into Mr. Shortis’s fifteen minutes of infamy – but it has been done to me personally and to the nationalist movement. In the interest of his patriotic friends, I must refer to the background to my manufactured ‘infamy’, my show trial where I was convicted of a political violence offence back in 1991.

On May 5 1989, Graham Williams of the Sydney Morning Herald, reported on Special Branch detective Neville Ireland with: “Extremist Group Calls

For Officer To `Be Hit'”. It was falsely claimed a pamphlet entitled “Heavengate Two” had made this threat. The pamphlet said no such thing, as I have shown elsewhere. Ireland was reported as saying of the alleged threat: “it will not discourage me – I will redouble my efforts”. Ireland who was investigating me and the National Action party I chaired, had supposedly stood up to those trying to stop his legitimate enquiries by threatening his life.

Reasonably, Graham Williams and Fairfax passed the detective off as a hero and the nationalists as defacto terrorists. Of course, I was never charged with it because the threat never happened, but the newspapers’ readers didn’t know this.

Then, on May 25 1989, Sandra Harvey of the Sydney Morning Herald reported on Special Branch detective Ireland again with: “Police Get

The fact was that no letter was ever sent although some members of the group had talked about taking this extraordinary course. Yet, the detective passed himself off as a hero in the press and in front of other police who would stand up to anything we might dish out.

At the same time, the Minister for Police, was persuaded to rise in Parliament and suggest that Special Branch police had been threatened and intimidated by our violent group (sic).

But who was this secret policeman? At the very time Neville Ireland was investigating me, he was rorting the Special Branch informants fund for his benefit and the benefit of another (a corrupt detective John Garvey who was personally acquainted with Sandra Harvey!) and regularly picking up from public toilets an old bent judge, David Yeldham, caught performing indecent acts in railway lavatories and escorting him home without charge!

Yet, the media allowed him to build up an image of honesty against a violent organisation of racists, something that was of great help to him when I was charged with a violence offence later in 1989 and was obliged to fight back against him. Who would believe me?? Indeed, a Royal Commission which proved him corrupt was several years away.

In 2016, I will file in the New South Wales Supreme Court an application to review my conviction. It is rightly expected that the foul methods of the political police will be laid bare, but till this occurs, patriots of all sorts remain on the firing line.

The lesson behind all this bears upon the smear of Mr. Shortis. It cannot be allowed to pass. All patriotic and nationalist people should denounce this Age article as a provocation.

There must be no more load ups of patriotic people in Australia.”

A central figure in the anti-Islam street movement the United Patriots Front is a self-described “biblical crusader” with a long history of posting videos to social media in which he poses with semi-automatic weapons and threatens to take up arms against the Government and Muslims.
Chris Shortis, from Victoria, is one of three spokespeople in the United Patriots Front’s leadership team, and has spoken at recent rallies in Bendigo, Richmond, and CBD.

But his online statements are similar to those of far-right Norwegian mass murderer Anders Behring Breivik.

Mr Shortis claims that Islam is a “demonic religion”, says the Port Arthur massacre was a “wicked ploy” by the government to disarm gun owners, and outlines an apocalyptic vision in which the United Nations is attempting install the Pope as leader of a new world government. “Patriots,” he claims, will be forced to take up arms and fight against the government and Muslims.

“You are not going to defeat Islam by negotiation … our media, our western governments who are fawning them on our doorstep are making our problem worse,” he says in one video entitled “Uncovering Islam”.

“We’ll end up fighting them one way or another … we should be doing it with absolute brutality. We did it with Japan … our freedom is under threat”.

Pictures from the Facebook page of United Patriots Front lead member Chris Shortis, aka sosministries1412 Photo: Supplied
Dr Chloe Patton, an expert in the visual imagery of extremism from the University of South Australia, said Mr Shortis’ presentation was similar to that of Breivik, a far-right terrorist who killed 77 people in Norway in 2011.

“Here we have an individual who is clearly radicalised, who is brandishing firearms while preaching holy war. The intricate conspiracy theories and crusader symbolism immediately brings to mind Anders Breivik,” Dr Patton said.

Fairfax Media is not suggesting that Mr Shortis would resort to actual violence.  (Crap!)

Mr Shortis regularly targets the media as well as progressive community groups, who he labels “traitors” and the “Marxist cultural elite”. He filmed himself with members of his group storming a community radio station in Collingwood in an apparent effort to intimidate broadcasters who oppose the UPF’s views.

In another of his numerous videos, Mr Shortis recalls an incident at his workplace where management raised a complaint that was made by someone of Islamic faith. Mr Shortis told supporters: “Stand up patriots … The time to worry about consequences is over”.

In social media posts over the past two years, Mr Shortis has posed with a high-powered rifle alongside several other firearms, including a semi-automatic handgun.

Dr Patton questioned why Mr Shortis had not apparently come to the attention of authorities.

“People have been incarcerated under anti-terror laws for much less than this,” she said.

In July, the government’s Counter Terrorism Strategy document pointed to far-right extremists as being of potential concern.

“It is also possible that individuals who are not part of, or inspired by, a proscribed terrorist group … who are fixated on a particular issue will employ lone actor-type methods in Australia, requiring counter-terrorism responses from agencies and the community,” the document says.

“The case of Anders Breivik underscores this possibility. Breivik was motivated by a far-right extremist world view based on distorted and complex ideologies.”

“Obviously extremist views that could result in violence or community harm are a focus. When we are talking about far-right extremist groups, we are monitoring what’s posted on their public facing sites,” she said.

“It’s important to make the point that the AFP is targeting the criminality, regardless of the person’s background or ideology.”
Fairfax Media has learned that the Australian Security Intelligence Organisation has taken a keen interest in the United Patriots Front, having recently approached community sources for information.

The level of attention given to far-right groups by Norwegian intelligence agencies was of intense interest in the aftermath of Breivik’s murder spree, in which he set off a car bomb in Oslo killing eight people, before shooting dead 69 Norwegian Labour Party youth members on the island of Utoya. He had previously come to the attention of authorities but the information was ignored.

The intelligence failures, described as a “catalogue of mistakes”, led to the resignation of Norway’s chief of police, and widespread criticism of the intelligence service.

Mr Shortis and the United Patriots Front both failed to respond to requests for comment.”