Despite Abbott winning government, the $1 a day Australian ABC national broadcaster spits blood of Labor Leftism to the last gasp.

Leftist Labor’s appointed ABC TV managing director Richard Finlayson thrashes out this evening the extremes of Labor policy ahead of his ultimate clean beheading.  Prior to the 2103 federal election, 41% of ABC journalists have said they would vote for the Greens, followed by 32% for Labor and 15% for the Coalition.

Pathetic sad faced illegals filmed upon told they will be depatched to Papua.  Do an SBS close up! Poor sad faced illegals!  The ABC provides a platform for pro-illegals like Ian Rintoul, David Mann, and Ken Robinson to peddle their invasion propaganda

Tis but a scratch. Come on, you pansy!  I’ll bite your legs off! 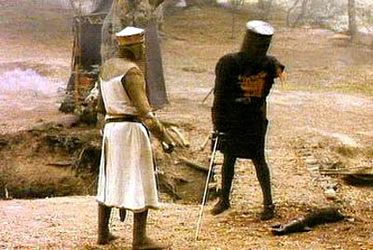