Today marks the 161st anniversary of the storming by British troops of the Eureka Stockade at Ballaarat.

Much has been written by all sorts of people about Eureka and its legacy – and of course, about the blue and white Flag of The Southern Cross. 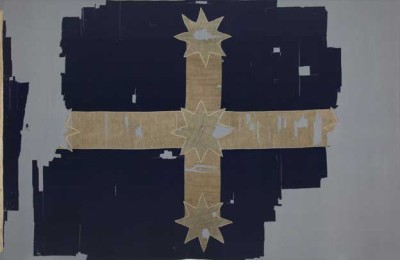 For the nationalists, Eureka symbolises in the higher meaning, the shedding of blood on our soil for freedom, akin as that idea is to the refusal to recognize unjust authority.

In the context of Australian modernity, the state that governs us is not our state, but an entity hell-bent on cleansing the Australian identity and transferring the sovereignty of our land to foreigners, who by that right, acquire the people’s wealth and resources.

Our image below is of the Chips Rafferty film about Eureka Stockade. The film, despite its historical errors, encapsulated a little of the Australia of our past, our rich broad accent of English and common style.

We publish Henry Lawson’s 1887 poem “Flag of the Southern Cross“, which best sets out the ideological quality of the flag of Eureka Stockade. 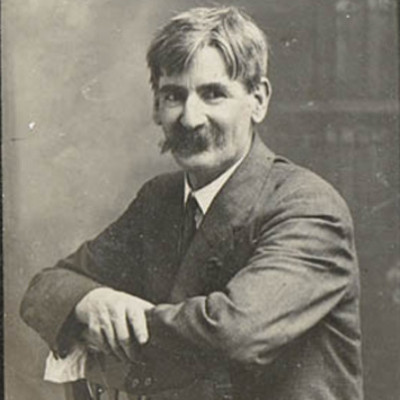 Flag of the Southern Cross

Editor’s note: “Dragon or Bruin” is a then-reference to China (the Chinese dragon) and Russia (the Russian bear, or “bruin”) 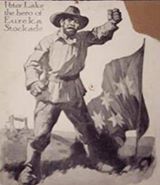 According to the eminent Dr Whitney Smith writing in 1975, the Eureka flag “perhaps because of its association with labor riots and a time of political crisis in Australian history, was long forgotten. 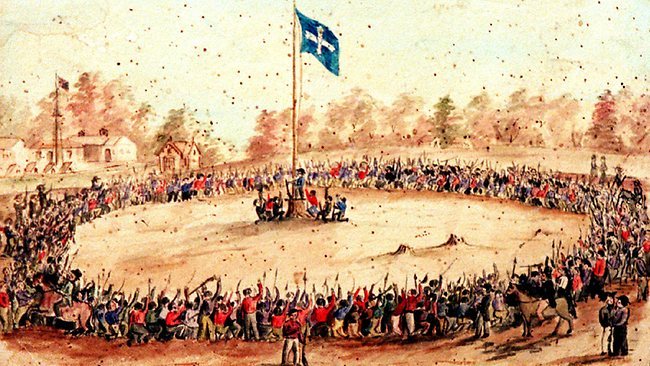 A century after it was first hoisted, however, Australian authors began to recognise that it had been an inspiration, both in spirit and design, for many banners up to and including the current official civil and state flags of the nation.”

J.W. Wilson, was also of the view that the Eureka flag, which he claimed to have devised, was an influence on the design of the 1901 Australian national flag, saying “Since then, however, the Stars have been placed on the bunting beside the Union Jack of Old England, and long may the flag remain the ensign for Australia!”

However not everyone remains convinced as to this supposed continuity and lineage. The first concept for a continental design, the National Colonial flag for Australia, which was devised in either 1823 or 1824, also features the five white stars of the Southern Cross configured on the red cross of Saint George. Also predating the Eureka flag was the Australian Anti-Transportation League Ensign, which from 1851 also featured the constellation, but in the form of five free-floating stars. The following exchange which took place in the Australian parliament during debate over the Flags Act is also indicative of this difference of opinion:

Mr Calwell – It may upset the Minister for Supply (Mr. Beale) to know that Eureka played a part in Australian history and that the flag of Eureka is perpetuated in the blue background of our flag.

However the influence of the flag of the United States of America which beginning in 1777 popularised the use of stars must also be acknowledged.

It does seem that the Eureka rebellion and flag are not altogether as deeply rooted in Australian history and the popular culture as some of their more over eager aficionados will insist. The evidence given here as to the existence of a star-spangled Eureka flag, as featured in publications and motion pictures from at least the late 1940s right up until the 1973, when the unique Eureka flag specimen was first authenticated and put on display at the Ballarat Fine Art Gallery, makes the reverse look rather more likely, with the traditional Australian national flag and its array of southern stars being a primary influence on early post World War II Eureka writers, artists and producers. Seen here are two posters promoting the 1949 movie Eureka Stockade showing both the star-spangled and standardised Eureka flag.

With respect to the provenance of the star-spangled Eureka flag, in an article by Withers published in the Ballarat Star, 1 May 1896, the maybe reliable John McNeil is mentioned as recalling a meeting on Bakery Hill where one Robert McCandlish “unbuttoned his coat and took out an unfurled a light blue flag with some stars on it, but there was no cross on it”. 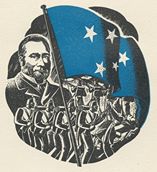 Seen here are some examples taken from Clive Turnbull’s 1946 “Eureka: the story of Peter Lalor” and a poster of the rebel commander-in-chief taken from the Ballaarat Historical Society collection. Also included in this selection is Clive Upton’s “Storming the Eureka Stockade”, as featured on the front cover of the 14 February 1970 Eureka Stockade Australian edition of the London-based Look and Learn historical magazine as sold to school students. 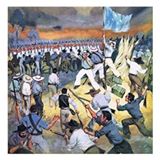