Australia First Party condemns the political fraudsters and self-proclaimed patriots heading to Cronulla on December 12 to exploit the tenth anniversary of “the Cronulla riots”.

The far-left are expected to target these people with street violence. The far-left equally talks of “riots” – and says it is opposing “racism”.

In 2005, nationalists coined the phrase “civil uprising” for the Australian people’s movement that spread over that week in Cronulla. We called the response of certain Arab gangs to the civil uprising “racist and politically motivated violence”.

“There were no riots. It was the multicultural industry and big media which spoke of riots. Each time they asserted ‘riot’ against the Australians, we countered their pejorative-terminology with ‘civil uprising’. It was a dialogue that danced through the electronic and print media of the day. The nationalists said clearly there was a cultural struggle argued in various ways including violence, an ethnic clash which resulted in Cronulla remaining essentially for a decade since – ‘white’. Australians have remained figures of racial hate ever since among Australia’s burgeoning Arab and other Middle Eastern communities. They also encapsulate for the political elite that symbol of an Australia they too would happily abolish for an Asian future.”

In an appalling trashing of historical meaning and legacy these self-named ‘patriots’ want to go one step further than just remembering riots. They say that the “riots” were about Islam: Aussies protesting Islam and Moslems doing violence against non-believers.

Australia First Party denounces in the sharpest way the Party For Freedom, Reclaim Australia supporters of Shermon Burgess, and some other supposed patriots who wish to transform this critical event in recent Australian culture-politics into part of their dialogue about Islam. They say Islam and Islam alone is the challenge to their vision of Australia. We say this vision is just ‘diversity-minus-Islam’ – which is still diversity. For these would-be patriots, Cronulla is where their campaign on all things Islamic began. It just wasn’t.

“This rabble of would-be patriot leaders was not present at Cronulla in December 2005, nor did they speak for it. It is now just convenient for them that they seek to enter into the historical memory with a different interpretation and ride it as a justification.”

It is true that the majority of the thugs who stalked Cronulla in the lead up to the Civil Uprising were Muslim and the majority who resorted to violence against the upsurge of December 11 2005 were Muslims. Yet, many were also ‘Christians’. What they shared in common is that they belonged to a few ethnic groups living in South Western Sydney. The civil uprising was not just about Islam: it was about race and culture. That is the essential dialogue Australia will have if it is to be one sort of country or another.

There is an issue with Islam in Australia that demands response, but the Cronulla message goes beyond it. In December 2005, Australians commanded – for the first time since 1966 when the White Australia Policy was abandoned – their own streets.

The legacy of Cronulla is that it is in the tradition of Lambing Flat (1861) and Barcaldine (1891), a symbol of mass action that suggests that in certain circumstances the ethnic discussion cannot remain restricted with nice parameters. The anti-Islamic types also wish to steal a symbol to cover their anti-patriotic advocacy that Australia be committed to a never-ending Middle Eastern engagement for the benefit of their other great love – Israel. Indeed, Israel is the much of their problem.”

“It stands to reason that professional Zionists would attempt to infiltrate the anti-Islamic movement to twist it to Israel’s ends. The sad thing is that the State of Israel doesn’t even need to mobilise Australian Jews in this struggle, because it finds plenty of willing collaborators – the Party of Freedom, the Australian Defence League, and the Q Society. These fraudsters are linked to a powerful and funded international movement that works to build support for Israel and its strategy in the Middle East. This conspiracy will be exposed as we tell the truth about Cronulla.”

On December 12, Australia First Party will organize separate events in the Sutherland Shire to mark the anniversary.

This is image exemplifies the true spirit the Cronulla civil uprising. 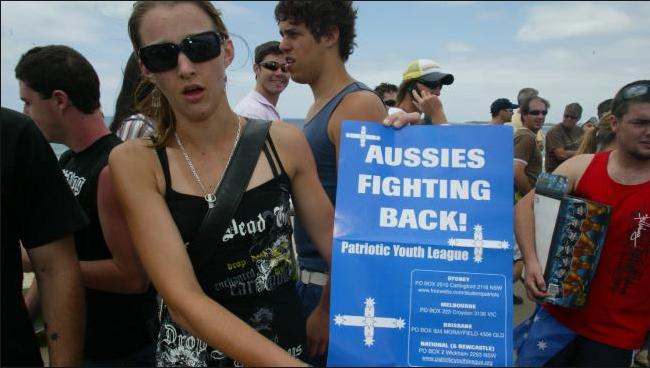 This “Memorial” (as below) chooses its own memory of the event, which is an Islamo-obsessive narrative 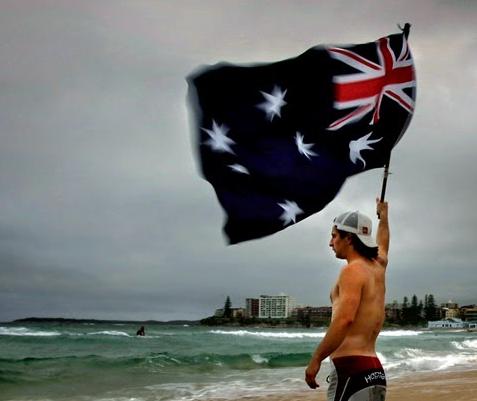