Skip to content
The Daily Mail has taken aim against a conscientious Aussie bloke who made a symbolic stand outside the Chinese consulate in Sydney. Their use of the pejoratives ‘rant’ and ‘racist’ have undermined the genuine sentiment expressed by this fearless Akubra-wearing patriot who took his anger to the street outside the consulate. There, he cracked a long whip, while vocalising the feelings of all true Australians who, courtesy of the Kung Flu, have woken up to the evils of the Communist Chinese Dictator State.

The Daily Mail has taken aim against a conscientious Aussie bloke who made a symbolic stand outside the Chinese consulate in Sydney.

Their use of the pejoratives ‘rant’ and ‘racist’ have undermined the genuine sentiment expressed by this fearless Akubra-wearing patriot who took his anger to the street outside the consulate. There, he cracked a long whip, while vocalising the feelings of all true Australians who, courtesy of the Kung Flu, have woken up to the evils of the Communist Chinese Dictator State.

Focusing his disgust on a surgical-masked queue lined up outside the Beijing Bunker in Camperdown, the quisling Daily Mail, carefully choosing its nouns and adjectives to demonise the hero, towed a pro-China line by condemning the unidentified man, writing, “Shocking footage has emerged of a man armed with a whip launching into a racist tirade at people lining up outside a Chinese consulate.”

Yes, the DM which plays both sides of the field while in actuality supporting only the globalist-capitalist borderless anti-native position has taken one thing and called it another.

On the contrary, what he had to say to the cowardly Chinese who treated this man as they treat all “foreigners” like animals in a zoo, which in their case means creatures on a ‘wet market’ menu, was timely, brave, and true.

“Death to communism! Wake up Australia! Wake up! No more shit from China,” he cried. “Filthy fucking commies. Trying to take over the world. No more.”

The Daily Mail had a problem with these opinions as they are as soulless as the regime that intentionally infected the world with this doomsday bat bug. They framed him as a madman and bigot because only someone afflicted with that combination of hostilities could dare openly express the truth against the evillest nation on earth. His passionate stance they characterised as “disturbing’ another enabling concession to the Beijing monster.

“Wake up, Australia! Be wise to these pricks!”

A wiser message he could not have shouted to the rooftops, WAKE UP, AUSTRALIA! And it’s that wisdom which traitorous organs like the Daily Mail fear! But this is where it’s already positioned itself on the wrong side of history.

Everything is coming out now, about how the World Health Organisation (WHO) is in Beijing’s lap and actually praised the communist state as having a better system of government, and dealing with the crisis consummately! This is while excusing their critical delays in conveying information about the pathogen’s human-to-human transfer. The WHO even admonished European countries from closing their borders to the Chinese. But only after, mind you, Beijing had knowingly allowed millions of infected citizens to travel aboard during the great Chinese New Year hiatus.

China has not dealt with the crisis, it’s forcefully tried to contain it while lying to the rest of the world about the number of deaths. It has no doubt lied about how the virus spread, with the theory of it having been lab-generated seeming more plausible in light of the manner in which China has subsequently behaved.

We’ve seen Chinese companies onshore dispatching their employees to buy up tonnes of medical necessities such as surgical masks, hand sanitisers and respirators and ship them in bulk back to the land of the dragon.

The treasury has had to put on a freeze to prevent foreigners from buying up Australian companies as their share prices plummet to ground zero.

Worse yet, the Chinese, in their unbridled altruism, knowingly shipped faulty medical supplies to other countries when they asked for help.

Millions of Aussies out of work, essentials like toilet paper unavailable, draconian laws like that of a police state required to contain this China-made virus, all the while daigou shoppers continue to raid supplies, and the DM would dare to sound like the ABC and condemn an Aussie for saying what’s on all our minds.

Not only is our Aussie hero right in what he said, but he should just be the start. Not only must we fortify our country against the all threats from the imperialist Chinese as a matter of urgency, and void their business interests, but we must insist they pay for this devastation they have wrought on the world. And while we’re at it, the Daily Mail can cough up for their act of treason in reportage such as this. 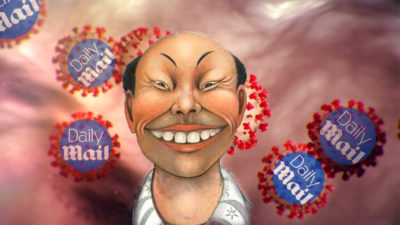