We keep trying to explain to Australians that the Chinese are up to no good.  Our First World ought never trust this backward and thieving culture as far as we can spit.

A deal with China is only good for China, so reverse it.  Australia was always been better off without cheap Chinese imports that profited multinational importers at the expense of decent Australian industries and jobs.  Before Gough Whitlam trashing Australia’s protection of our First World industry and workplace standards, Ordinary Australians enjoyed an enviable quality of life. 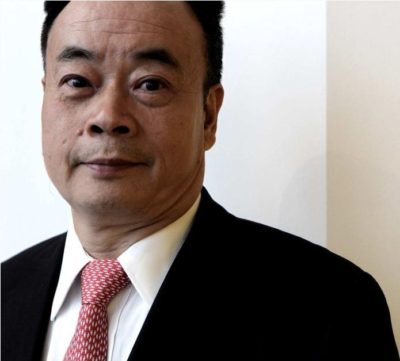 If you see a suspicious Chinese dealing in wads of yuan, do not touch it, but report it to authorities

The ABC Four Corner’s TV investigative documentary ‘Power and Influence‘ televised nationally June 5 2017, reveals the latest in the ongoing depth of Chinese imperialist penetration into Australia – our property, our land, our resources, our institutions and infrastructure, government and our very sovereignty.

(Ed. May be Guthrie’s 10x Google plan is to partner more with Fairfax Digital).

Former Australian Trade Minister Andrew Robb (Liberal Party) walked straight out of Canberra’s Parliament in 2016 and within 3 months was on an $880,000-a-year job with a billionaire closely aligned to the Chinese Communist Party and its key trade policy.

As part of the “confidential” consultancy deal, Mr Robb, the architect of the China-Australia Free Trade Agreement, began consulting to Ye Cheng the day before the July 2 federal election in 2016.  The arrangement, uncovered by a Fairfax Media-Four Corners investigation, involves monthly payments of $73K to Robb commencing from July 1, 2016. Robb then announced he would not recontest his seat of Goldstein…to spend more time with his cashed up family somewhat to the north of Australia.

Mr Ye Cheng owns the deliberately anglicised Landbridge, which controversially acquired the 99-year lease for the Port of Darwin in 2015. He happens to be a member of the national Chinese People’s Consultative Committee, an advisory body that President Xi Jinping has directed to “uphold the CPC [Chinese Communist Party] leadership without wavering“.  How many frequent fliers to and from China has Robb accumulated? 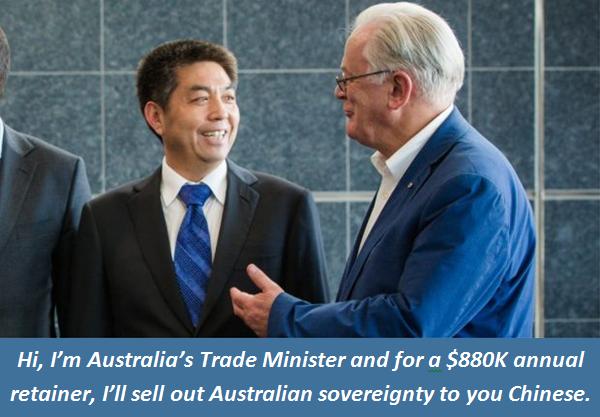 The details of the consultancy have never been disclosed by Mr Ye or Mr Robb. Neither has the fact that Mr Robb is being used to spruik a Chinese Communist Party-backed trade park as part of his consultancy agreement.

Mr Ye frames much of his business activity, including the acquisition of the Port of Darwin lease, in terms of advancing Beijing’s ambitious global trade and infrastructure project ‘One Belt, One Road‘ – premised on ye ol’ silk road Chinese 51% imperialism.

The port’s acquisition sparked a major controversy after then US president Barack Obama complained he hadn’t been forewarned. The Defence Department and ASIO have vetted and cleared Landbridge’s acquisition of the port.

Director of the Australian Strategic Policy Institute, Peter Jennings, said the port deal might benefit Beijing’s long-term strategic interests, and not necessarily those of Australia.

Mr Ye publicly announced on September 2 last year that Mr Robb had been appointed as a “high-level economic consultant”. At the time, Mr Robb had already been working for Mr Ye for eight weeks, and had earned $146,000, including GST but minus expenses.

Bit sus or what?

“What ministerial standards?  I resigned last month, on a Ching nod and a wink.”

This round of Chinese Imperialism exposure, the ABC shock-jocks how Chinese Imperialism is facilitated by corrupt Liberal and Labor senior politicians – like $880k a year lubricated Andrew Robb.  That quick and easy trade deal with Beijing smelt too good to be true.

Chau also made donations to the federal Liberal Party of $560,000 in 2016, and $100,000 to the NSW branch.  He donated $200,000 to Labor federally.  Chau has made donations to non-political causes in Australia, most notably $20 million for the construction of a business school at the University of Technology, named the “Chau Chak Wing building”.  We understand that Labor’s Deputy Leader Tanya Plibersek’s electoral office a few doors away has been involved in the ‘arrangement’.

Chau is a member of a provincial-level People’s Political Consultative Conference (CPPCC), and also owns a newspaper in China. The press in China are closely monitored and influenced by the central government.

Anyway, we recommend a view of the ‘Power and Influence‘ doco – click image to go to ABC video: 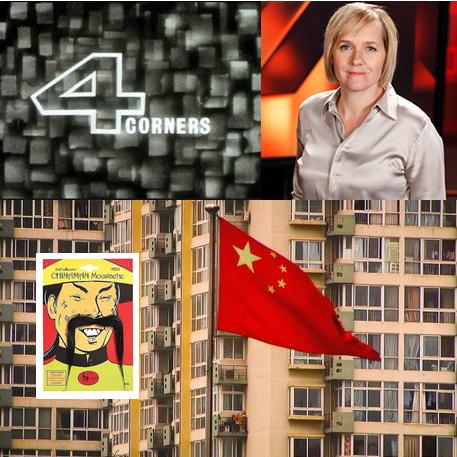 And ABC Troughwoman, keep your 10x Google mitts off ABC Four Corners; it’s the only independent journalism remaining at the ABC.  And Sabertooth Sarah Fergusson is right at home getting her shock-jock fangs stuck into da Burley Griffin swamp life. So just don’t sack Sarah just because she’s a White Normal Aussie and a qualified and seasoned journalist. 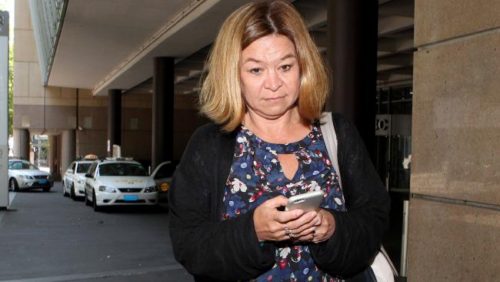 Never been a journalist, yet resigning leftist Spigelman phoned Rajeev at Egon Zehnder to cement a selfish PC legacy.

Those corrupted and anti-Australian seem content with the entry of China into Australia once they see their bank accounts bloated with yuan.

Other ‘Australians’ in the spy apparatus are fearful and have rightly raised concerns.  PM Malcolm Turnbull’s latest trip to Singapore and his speech preaching regional security has shown; there are fears even at the highest levels that China’s influence is not all rosy – and that it involves espionage and other intrusive activity. 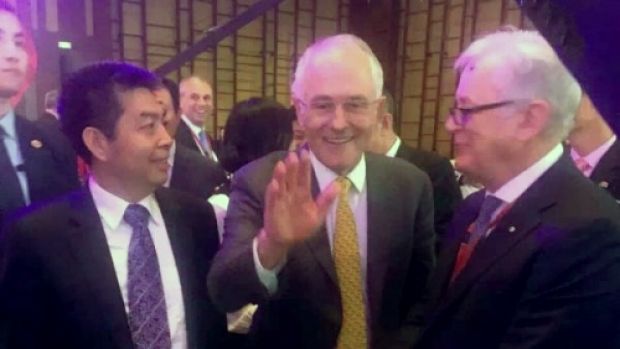 The fact is that New World Order imperialism is in conflict with the rising Chinese superpower. In the ongoing contention much truth will be told and much more can be learned.

We are seeing Australia’s spies warn of the ‘use’ by China of its students in Australia, of spies in the Chinese community, of strategic takeovers of parts of the economy and so forth.

Yet all this was really predictable at the start, in fact decades ago It is really the speed at which Chinese imperialism has developed in Australia which has overwhelmed them, particularly in the last ten years. Of course, ‘our’ intelligence apparatus does not speak for the Australian Nation but for the interests of the Australian establishment inside the framework of the globalist system to which they are loyal.

The panic is clear.

Australian nationalists say that this conflict between the two imperialisms is the key question in the survival of our country. The need for national independence, armed neutrality and a government prepared to step outside of all convention to secure these objectives – are the historical issues of our time.

In the pamphlet ‘The True Cause Of Australian Independence‘ (by Dr Jim Saleam and Lorraine Sharp published Feb 7 2016), it was said that warfare on Australian soil is possible in the foreseeable future and that China would rely not just on its navy and military but on its students and the armies of visa labour likely to be herded into the Northern Zone for ‘development’ work – as combatants.

It was said that the NWO system may ultimately acquiesce in the partition of Australia in their higher interests. Essentially, the ‘Western Alliance’ is no ally in this fight.

As the facts accumulate these matters are increasingly discussed across the nation, the role of the nationalists to build concern into a mass independence and neutrality movement has never been more urgent. 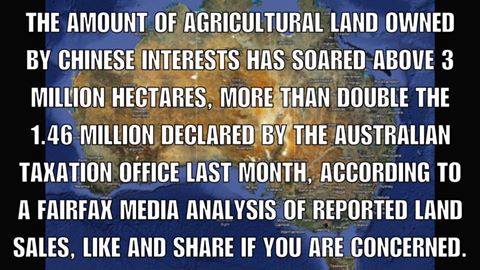 And clearly, Andrew Robb, former Liberal Party Trade Minister, has been shown by the ABC as having been corrupt while in public office. He did a trade deal with the Chinese Communist Party and months later after resigning to invariably spend more time with his family, Robb’ on the Chinese take pocketing $880 000 equivalent in Yuan for his part-time Canberra lobbying on behalf of Beijing.

There is no doubt to us that Andrew Robb is a true son of the traitor class. His name is appropriate.  He negotiated the ChAFTA (free trade deal) with China which has facilitated China at every point to enter Australia. 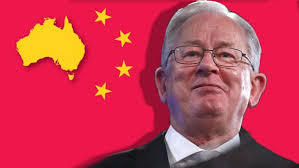 Having done that he met up with all those who now pay him and his rate of wealth-gain will only increase. He might even end up like Bob Hawke and have $380 million.

Robb’s fraudulent China-Australia free trade agreement (ChAFTA) was only to benefit China. It was a dud deal and even Bill Shorten said so at the time in September 2015, days before Tony Abbott was deposed by Labor-Lite Malcolm Turnbull. Robb, so desperate to get his $880K threatened publicly that China could pull out of the deal if Parliament quibbles.

So has Robb’s free trade promise delivered his plethora of jobs and opportunities for Australian businesses as they gain greater access to export markets in a country of 1.4 billion Chinese and an economy of some $10 trillion?

Or has Australia simply again surrendered our domestic industries and jobs to cheap Chinese labour?

Would the nationalists punish Andrew Robb?

Australia First Party has said in its programme that it wants a Truth Commission to establish who has betrayed the Nation and how they’ve done it. In our public material we have continually said that if the nationalist struggle is won it should not be assumed that the traitor class simply continues to enjoy what it has robbed and conspired to possess.

Quite the contrary. The punishment for traitors is basic. The assets of Andrew Robb should be seized, Robb appropriately imprisoned and banned from politics and commerce for life.

The Liberal and Labor are all double dipping in the quid-pro-quo polly trough.  They collect the aristocratic multi-million dollar pensions, while also pre-arranging a six figure salary with a multinational months soon after resigning from public life “to spend more time with family”.

Vote major party sleaze and you vote for self-enrichment.

Former resources minister Ian Macfarlane has become the champion of post-porfolio spoils as former Mining Minister, despite being overtly dyslexic and dumb.  Four months after declaring he needed to spend more time with his family, after being pissed off with Malcolm Turnbull,  Macca resurfaced almost Lambie botoxed as CEO of Queensland Resources Council on $500,000. 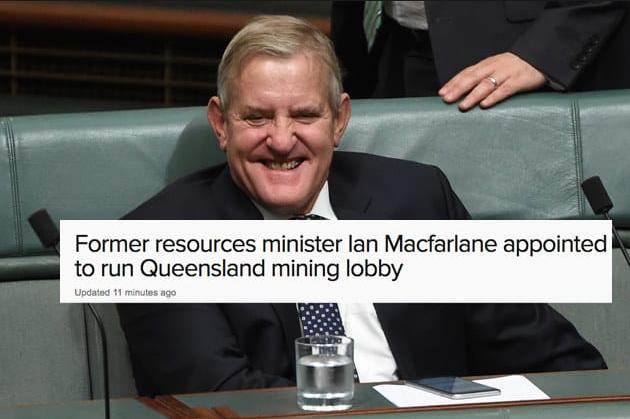 Who’d have tought?  A couple of months later Woodside Energy also appointed Macfarlane to their board, citing his wealth of knowledge and experience in the sector.

And on top of his Canberran God-given-right to an elitist pension.

Guess how that Indian’s Adani mine scam got the nod and wink?

Get a confidential call from international head-hunters Egon Zehnder and you know the multinational mafia have serious cash on offer – ask Michael Guthrie.