This time last week as the global warming Antarctic cold fronts were rolling across Australia’s east coast (dare say in winter), the national weather bureau publicly warned of a week of dangerous surf and swell along the NSW coastline. 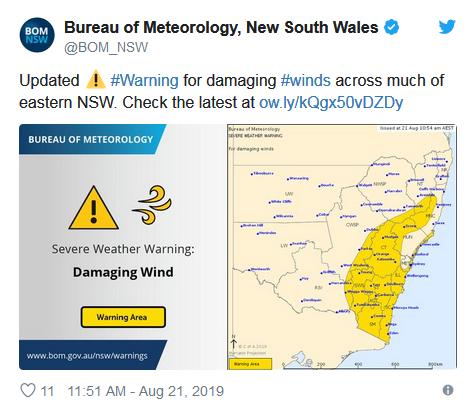 “Boat owners, skippers and rock fishers are being warned to expect dangerous surf conditions along much of the NSW coast.  A marine wind warning for gale force winds is also forecast for the Eden coast and a strong wind warning is in place for Sydney closed waters, and the Macquarie, Hunter, Sydney, Illawarra and Batemans coasts.

Rock fishermen are advised to avoid fishing near dangerous surf, to wear a lifejacket and check weather forecasts before heading out.  They should seek a safe location sheltered from the surf and avoid coastal rock platforms which are exposed to the ocean.”

Weather bureau forecaster Jordan Notara stated to the media on Monday, August 19 in 2019:

So the coastal hazard was made very clear, very publicly. 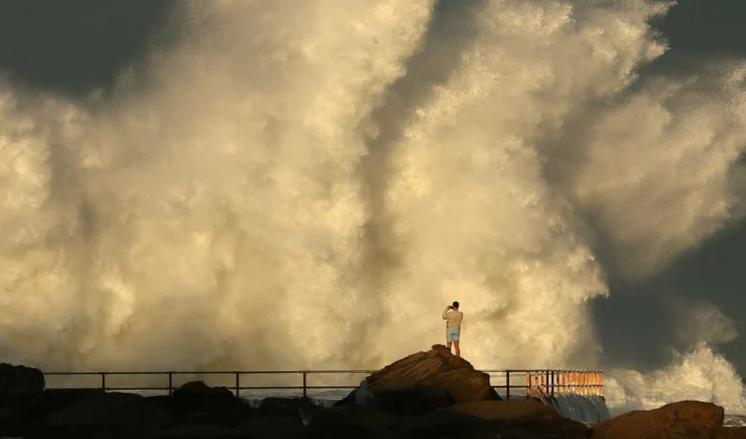 “skippers and owners of small craft are advised to check weather conditions before they consider crossing a coastal bar or heading offshore. Those already on the water should carry appropriate safety equipment and wear a life jacket.” 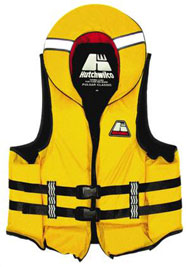 This is a life jacket – good when ‘freak wave’ sweeps you into big sea.

Even dogs can wear life jackets 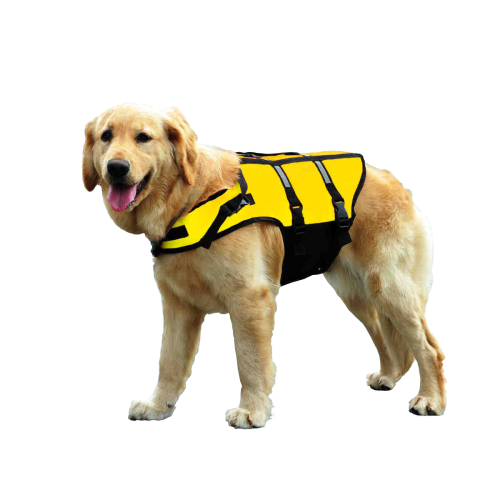 But for incoming Asians swamping Australia, all this big sea warning translates as “you rittle beauty!”

Last Saturday the surf was pumping south of Sydney, especially at rock fishy Hill 60 at Port Kembla, so Vietnamese import Van Hai Tran (hero male aged 66) went to try his ruck rock fishing off the dangerous rock platform.  Squatting in ethnic Bankstown, the import grabbed his rod and tackle, hopped in his Toyota Kluger and headed out to join his fake refugee compatriots to catch his imagined big fish. 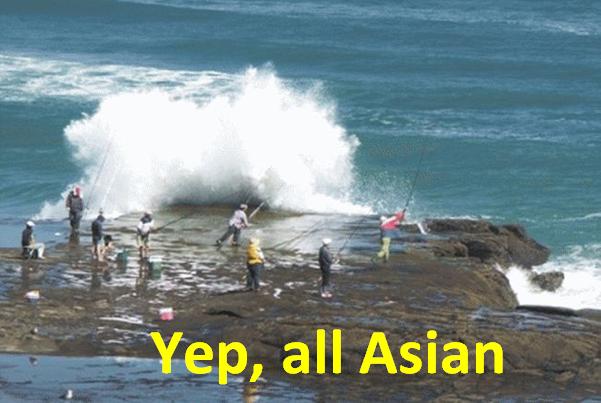 And yet putting himself in wild harm’s way for his addictive fishing fervour?  All when the coastal town of Port Kembla offers a number of excellent fish and chippers – like Fishnets, Shells Diner, South Coast Seafood, Legendary Fish & Chips, Loui’s, and Gander’s Grub. 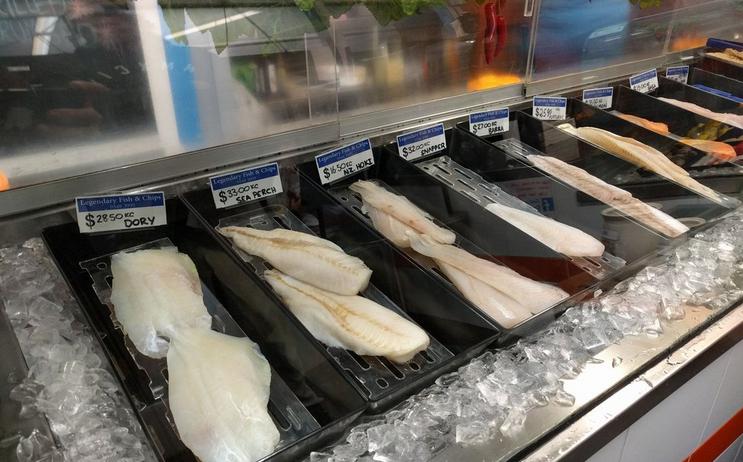 Retail fish and chips are legendary at Legendary Fish & Chips, Port Kembla – and they’re even scaled, gutted, cleaned and cooked for ya!

Yet Tran couldn’t swim to save himself and had no life jacket.  “Life jacket for wooses!” he reckons, but in Vietnamese.  Bella smarter!

Tran’s close family members came looking for him on Monday (yesterday), two days later and located his abandoned silver Toyota Kluger in the car park at the bottom of the hill near the rock platform.

By midday the family reckoned they should call 000 emergency – must have been close-knit.

As nightfall approached, police rescue had to call off their search for the missing rock fisherman.

Lake Illawarra District Command’s Inspector James Dark said PolAir (rescue helicopter) and marine rescue boats had travelled as far as Shellharbour in rough and choppy seas. Insp Dark said police had not located Mr Tran or any fishing equipment in his car, on the rock platform or in the water.

“At this stage we fear he has gone off the rocks when fishing. With the couple of days that have passed, we have checked the tides and they are heading towards Shellharbour which is why PolAir has assisted in going down there. The choppy seas and winds are making it a difficult search.  We are not sure whether he was wearing a life jacket or what sort of safety equipment he had (none).  With the seas, it is very treacherous.”

Insp Dark said there was nothing else PolAir could have done by late yeterday afternoon.  He said police would assess the situation and check resources before resuming any search.  Police are not ruling out that Mr Tran could be somewhere else, but that was just to appease the media.

Another delinquent Asian rockfisher presumably swept out to see and succumbed.  It’s coming into White Pointer season, so there wouldn’t be much left anyway.

It’s just more wasted Australian taxpayer wealth wasted on yet on foreigners.  The funding ought be deducted out of Canberra’s foreign aid budget, like the billions gifted to the Third World United Nations and to über-breeding economic refugees seeking to luxuriate on Australia’s first world welfare perks.

So Tran’s family is distraught, including brother-in-law Bang Tran, who said said the family were “worried and scared”. 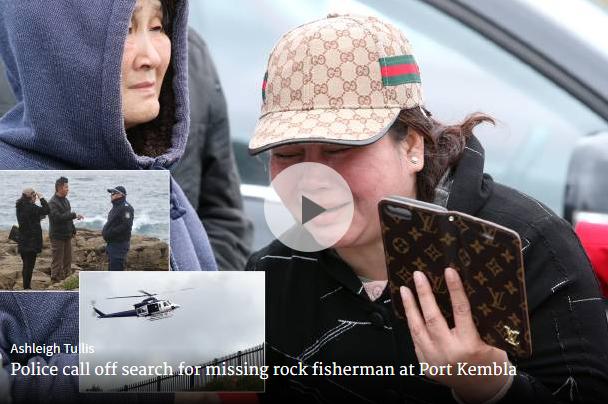 A week prior, Wednesday August 14 reports were coming in a 42-year old man who had ‘driven’ from Victoria into New South Wales and had gone swimming at the isolated Gillards Beach north of the coastal town of Tathra. What an unfortunate name for a beach!  Couldn’t they find Aboriginal name at least?

Apparently, he went for his isolated surf swim at dusk soon after arriving at the nearby national park campground, but then went missing; his twin brother soon after finding his belongings on the beach.

Another delinquent ethnic responsible for costly wastage of emergency resources? 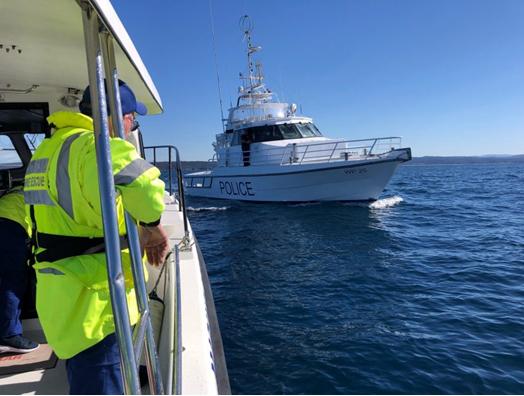 No, it seems it’s a staged disappearing hoax by the twins, since the missing brother is wanted by Victoria Police on fraud charges.  So it’s another waste of emergency resources.  Estimates put the cost of the whole operation at around $1 million.

A search was conducted by local police, Fire and Rescue NSW, SES workers and NSW Ambulance, with police divers also called in to assist.

The man, a Nepalese national, was found dead just after 1.30pm. He is yet to be formally identified, besdie4s the fact that he is Nepalese and was supposedly studying in Australia on false pretenses – couldn’t speak English.

More than 70 people have drowned around Australia in the more than 50 days since December 1. 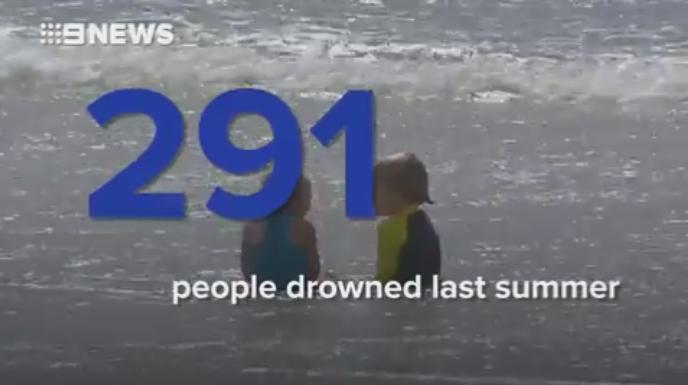 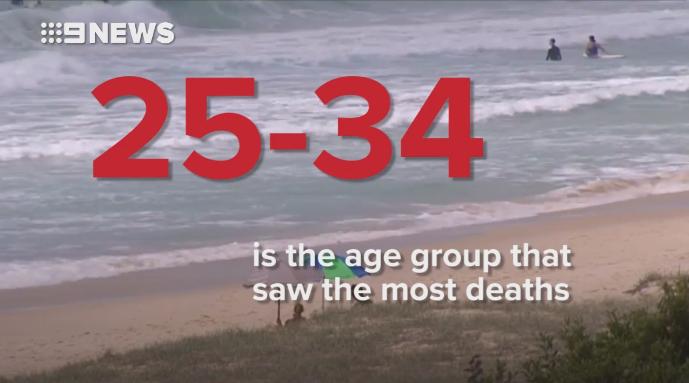 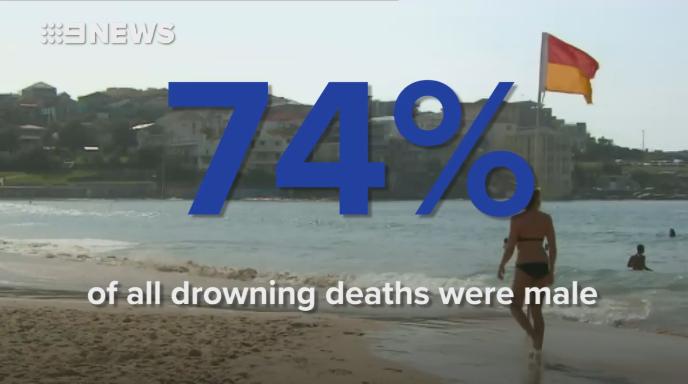 The bulk of Australia surf rescue funding needs to come out of Canberra’s foreign aid budget, not from benevolent donations from entrusting, good-willed White Australians. 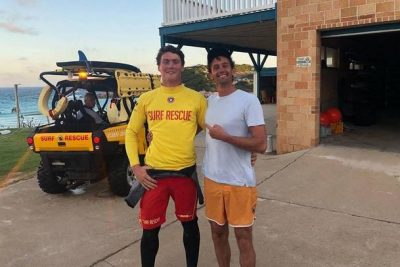