Australia is pushing ahead with plans to withdraw citizenship of Australia-born children of immigrants who join the Islamic State, immigration minister Peter Dutton said last month (May 21,2015). 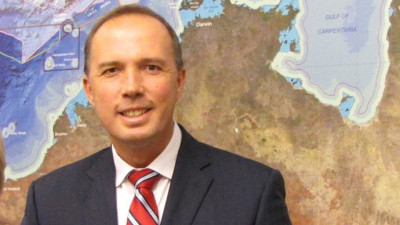 (Note:  It is a misnomer to call them “homegrown jihadists” like many incorrectly do in the media.  Muslims in Australia reject Australian society and instead choose to multiculturalism and set up in exclusive urban ghettos with other Muslims, where they continue to speak in Arabic and not English.  They choose to send their offspring to Islamic schools, rejecting Australian social and cultural teachings.  Such offspring cannot be said to be ‘home-grown’ in Australia.)
The Canberra government wants to change the Citizenship Act to make fighting for Islamic State (IS, formerly ISIS/ISIL) in Syria and Iraq a reason for losing one’s citizenship.

“I can hardly walk down the street without people saying: ‘Why do you let these people back into our country? They come back more radicalized. They are a huge threat to Australian citizens. We should act and that’s what the government is doing,” Dutton said.

Parliament could probably change the law on citizenship without any obstacles from the constitution, as the Australian constitution makes no mention of citizenship, unlike the US Bill of Rights.

“The principle for us, which is very important, is that we don’t render people stateless,” Dutton told Sydney Radio 2GB.

But critics say that Australia should take responsibility and imprison its terrorists rather than shunt them off to other countries.

Two weeks ago the 17-year old son of a Syrian doctor became the 23rd suspect to be charged with terrorism offences in Australia since September of last year. Police allege he had three pipe bombs in his house in Melbourne and was planning an attack.

Between 100 and 250 Australians are estimated to have joined IS in Iraq and Syria, according to the London-based International Center for the Study of Radicalization and Political Violence. Australia has a population of just 24 million. In contrast only 100 fighters have joined from the US which has a population 13 times that of Australia.

Australia raised its national terrorism warning to the second highest level in September and since then 288 passengers have been prevented from boarding flights leaving the country, the government said Thursday.