Surf’s up, swell’s up, dumb Asians have already been dragged into the sea, so it’s all go. Get ya video camera out and enjoy!

Sports Bet has opened up online betting that in the next week, the odds are 5 to 1 that an Asian rock fisherman will be swept off his feet by big seas off Sydney.  Surf cam has all its cameras ready and the wait commences.

The clue is the perfect lucky Asian 888 alignment of moon, tide and big swell, which is perfect for Australia to lose another ego Asian fisher to the sea. 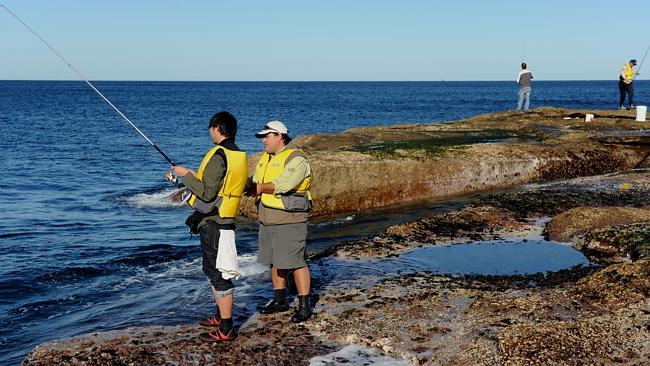 So this is a fishing rod and the fish are that way, you’ll get it

Asian rock fishing widows in Sydney are growing in number.

Emily Wang (28) is desperate for answers after her husband Qintao was swept to his death two weeks ago fishing off rocks near Bondi Beach.

She also called for other amateur Asian rock fishermen to wear life jackets and steel spiked shoes to avoid any more such tragedies.

Ms Wang, who is 10 weeks pregnant with their first child, has engaged a commercial diving company to find Qintao.

“They will conduct a private search near the fishing spot where he went missing. I have also thought about going to a psychic to find him,” Ms Wang said.

“I need to see Qintao. In my culture it is very important that we can have closure and put him to rest. But I have not given up hope on him.”

Her fish ego husband, from full-blown Asian-enclaved South Strathfield in 2010 became the 17th rock fishing Asian casualty for that year after he was washed off the Kiama headland on Friday night.

The 41-year-old is the latest statistic in what is already one of the worst seasons for rock fishing-related drownings.  More than 90 per cent of the victims were of Asian descent.  Have life insurance companies claused their policies yet?  Are you a male Asian and do you rock fish?

So solly no insurance mate!

So illegal Emily Wang is in fear she will be deported from Australia. Must be other reasons. 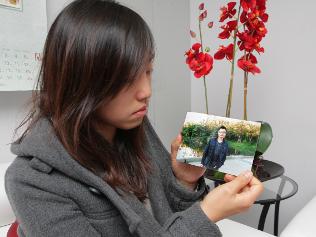 It has become a sport in its own right – watching and videoing Asian rock fishermen in big ocean swell.

Here’s a classic at Shelly Beach on the New South Wales Central Coast last week. Dumb arse Asian gets knocked over by monster wave at Shelly Beach day before another drowned. 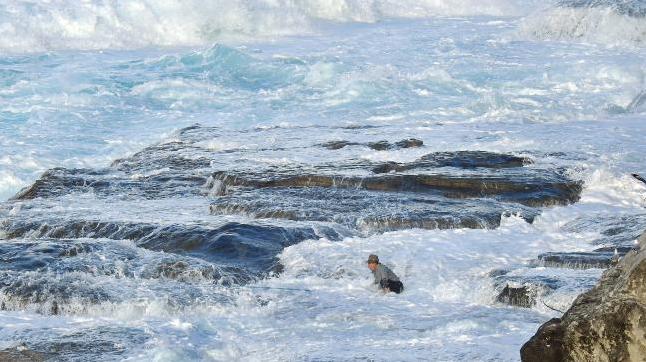 Sports Bet is a guaranteed 5:1 cert the dumb arse asian will succumb and disappear

The fisherman is seen waist-deep in swirling, white water before losing his footing and almost disappearing from view. With no sign of a life-jacket, amazingly, the man manages to regain his feet as the water crashes around him and, incredibly, he carries on fishing.

The photos were taken by Manly resident Suzanne Lawson last Saturday — the day before another Asian fisherman was swept to his death at Grotto Point, near Sydney’s Clontarf.

Nearly 30 Asians have died while rock fishing in NSW since the middle of 2011.

Northern Beaches Police commander Superintendent Dave Darcy said, “My most haunting image of rock fishing gone wrong is of a pair of shoes, a neatly folded jacket and some personal effects on a rock ledge at Blue Fish Point (North Head),” he said.  “When I turned around to look at the sea, there was nothing to tell you the story of the tragedy. The setting was peaceful and quiet but the sea had gobbled up this person and he was gone.”

So to be a real Asian rock fishing hero, remember: 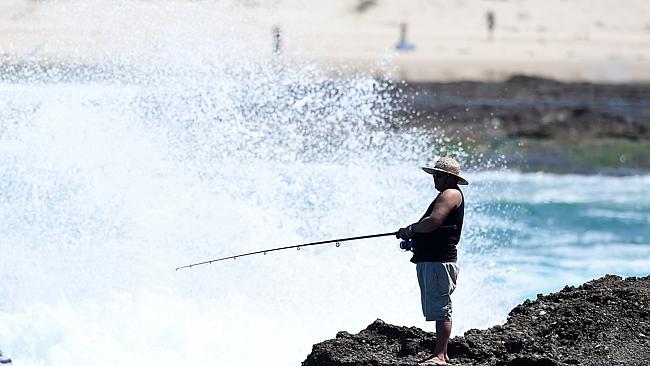 Confucius say:  “He who fish in other man’s well often catches crabs.”